This post is part of the CMBA Trains Plane and Automobiles Blogathon, running from October 19th - 24th. Click below for a list of the other weary travelers on the filmic highways and byways! 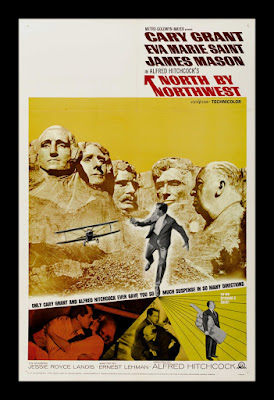 Anyone who has known me very long knows that while I love the work of Alfred Hitchcock, the film that rises to the top of the heap is his action masterpiece, North by Northwest.  It hits all the notes a Hitchcock film should – no surprise considering co-writer Ernest Lehmann has said it was his plan to write "the Hitchcock picture to end all Hitchcock pictures".

He started with Hitch to pen an adaptation of The Wreck of the Mary Deare – they couldn’t get a hook on the film, but they got along famously.  Ernest offered to drop from the project, but Hitch would hear none of it – they whipped up a mad plot and pitched it the producers, who suddenly couldn’t care the Mary Deare wrecked or not.


The primary kernel of the plot was based on a true story – Journalist Otis C. Guernsey once told Hitch about a fictitious secret agent manufactured by a couple of British secretaries, which the German agents started wasting time following around.  Otis began to work up a story about a traveling salesman mistaken for the agent, but even though he couldn’t make head or tail of the plot, Hitch bought the idea from him for ten grand.  He and Lehmann took the idea and started folding in all the set pieces Hitch had been wanting to do, including a chase across Mount Rushmore.


Lehmann used to work on Madison Avenue, and came up with the idea of making the traveling salesman (which they first thought would be great for Hitch-alumnus James Stewart) into a stylish ad-man, for whom they rightly cast Cary Grant. We’ve often joked that Cary Grant could easily have played the role that James Mason played, that of mastermind and Mover of Government Secrets (Perhaps) Philip Vandamm, but Mason could never have played Roger Thornhill.  He’d have been able to look at the Glen Cove constabulary and asked, "Do you honestly believe that this happened the way you think it did?", they would immediately reply, "Er, no, sir, you must be right, you're free to go, sorry we bothered you." Now, a film with James Stewart as Thornhill and Cary Grant as Vandamm?  Where’s my parallel dimension transporter?


The setup to the chaos is a simple case of mistaken identity. While meeting some friends at the Plaza Hotel’s famous Oak Bar, Roger O (Stands for “Nothing, like me”, he explains later) Thornhill flags down a bellboy who was at the time paging a Mr. George Kaplan.  A pair of shady Jaspers assume Roger is Kaplan, and hustle him into a taxi faster than you can say “The Wrong Man”. He’s whisked out to Long Island to the home of a mysterious and suave gentleman named (he says) Townsend who begins to grill him on mysterious goings on, about which Roger dutifully reports he knows nothing, and also that he’s not even the guy they’re looking for, which explains the first answer perfectly.  Instead, Townsend compliments “Kaplan” on his rigorous training, and sets out to kill him by plying him with bourbon and Laura’s Mercedes.


The film sneaks into paranoia film territory here – when he attempts to relate his story to the police, all evidence of the events are erased from the mansion, and the people living there claim he’d been there for a party and left in an advanced state of inebriation.  He makes his way back to the Plaza and finds the enigmatic Mr. Kaplan’s room, his mother (Jessie Royce Landis) in tow, and nefarious characters on their tail.


It’s at this point the scene shifts and Hitch uses one of his classic tricks – giving the audience information the characters in the film don’t have, so we understand more about what’s going on than they, and making the whole situation more suspenseful.  We learn that Mr. Kaplan does not exist – we learn it seven times, to be precise – in a wonderful bit of expository dialogue, a board room of spymasters, led by “The Professor” (Leo G. Carroll, made up to look like one of the Dulles brothers) they explain in exacting detail that Kaplan is a fiction, a decoy, created to give the Bad Men someone to chase, while their real operatives can work undiscovered.  They learn of Mr. Thornhill’s predicament, and choose to do nothing, gleeful at the prospect that their decoy has suddenly sprouted legs and is quacking all on his own.


From there we watch Roger “hunt for a man that doesn’t exist”, as the trailer describes it, from Chicago to a cornfield to an art auction to Mount Rushmore to a hospital to Abraham Lincoln’s nose.  And if that breakneck list makes you want to see the film, you had the same response as the MGM producers when he shot it past them.


The location shots in the film are almost as famous as the film itself.  Hitch couldn’t get permission to shoot in, or even in front of the United Nations, so they pulled an indie film trick, and set a camera up in a hidden location, and quickly and surreptitiously filmed Cary Grant getting out of the cab for the shot – the interiors were all done on sound stages. The famous cropduster scene was filmed on Graces Highway in Kern County, California (and if you care to give it a look, here’s the link to it on Google Maps)

And as for that last shot of the train going into a tunnel? Hitch gleefully confirmed it means exactly what we all thought it did.