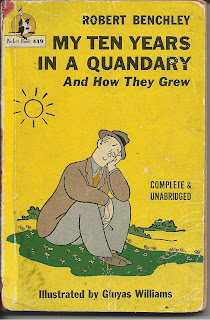 “Anyone can do any amount of work provided it isn’t the work he is supposed to be doing at the moment.” — Robert Benchley.
Robert Benchley (1889 - 1945) has been one of my favorite humorists ever since my high school days, when I read a vintage copy of his hilarious 1936 collection My Ten Years in a Quandary and How They Grew.  I've also enjoyed his movie work as a character actor since I first saw him in the great Alfred Hitchcock’s Foreign Correspondent (1940); few people can make the word “No!” sound so funny. Watching Benchley in It’s In The Bag! for last week’s blog post led me to revisit Benchley’s witty, classic Vanity Fair essays, which in turn made me eager to watch his drolly funny, award-winning short films, now available from Warner Archive in a 3-DVD set, The Robert Benchley Miniature Collection.
As the scion of a renowned writing family including Nathaniel Benchley and Jaws’ Peter Benchley, Robert Benchley became a multi-media phenomenon when Hollywood beckoned and he became king of the mini-comedies, whose titles usually began with the words How To…. In most of these shorts, he usually played either an endearingly frazzled lecturer/expert or the ultimate everyman Joe Doakes (not to be confused with Joe McDoakes, a different everyman played in a series of Warner Bros. comedy shorts by a pre-Jetsons George O’Hanlon) exploring, puzzling over, and of course commenting on the foibles and challenges of daily life. The second of Benchley’s 46 short films, The Sex Life of the Polyp (1928), was among﻿ 25 classic films preserved for posterity﻿ by the Library of Congress’ National Film Registry for being “culturally, historically, or aesthetically significant.” Adapting one of his own essays and using animation, Benchley plays a ditsy doctor lecturing to a women’s club about the sex life of the ever-gender-bending polyp. Benchley’s droll commentary includes this:

“We took one of the tiny creatures home with us to live. It was at the time a girl polyp, so we called her Mary after Ethel Barrymore. She was at first naturally shy, but soon grew accustomed to our mannish ways and became more like a child of our own than a polyp—although she looked more like a polyp than a child of our own....”
Those of us who’ve heard the anecdotes about Benchley and his sharp, witty colleagues at ’s Algonquin Round Table back in the day may long to go back in time to break bread and quaff cocktails with them. Of course, even the Algonquin gang probably had their off-days wit-wise, grappling with writer’s block, deadlines, hangovers, and life’s usual highs and lows. Luckily, whether you read traditional paperbound books like Mother used to make, or online, Kindle, or whatever new medium appears, we’re lucky to have Benchley’s hilarious essays in various formats. The following excerpts from “Lucky World!” in My Ten Years in a Quandary…are among my favorites:
When you come to think of it, the wonder is not that there are so many jammed automobile fenders, bad motion pictures, sore throats, divorces and wars, but that there aren’t more of them. We are living in a world that is shot through with luck, that’s all….Consider the number of young people all over the world who are getting married, day in and day out, for no other reason than that someone of the opposite sex looks well in a green jersey or sings baritone, and then tell me that Divorce has reached menacing proportions. The surface of Divorce has not been scratched yet. We are lucky that everyone isn’t divorced.
Look at the people in the Congress, or the Chamber of Deputies, or the Parliament in , and listen to what they say. The only logical ending to it all is that the world is headed for dementia praecox, with all the buildings tumbling down, all the water works shooting up into the air and all the citizens bumping into each other with trays of hot soup. 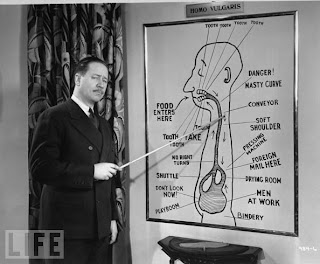 And yet automobiles dodge each other as if by magic, passable motion pictures are produced, many people stay married all their lives and actually don’t seem to mind, and only occasionally does hell break loose entirely. It’s a pretty lucky old world we live in, when you consider its possibilities.
Benchley sure got around, making Hollywood short subjects for Fox, Universal, RKO, Paramount—and MGM, where the Simmons Mattress Company first approached him to write and act in the short How to Sleep, inspired by The Mellon Institute’s sleep study. Benchley did double-duty as the narrator and sleep-deprived protagonist, trying everything from hot baths (ouch!) to a midnight lobster snack (yum!) to every kind of goofy sleeping position imaginable. Benchley later claimed his role was “not much of a strain, as (he) was in bed most of the time.” Nice work if you can get it! Audiences at preview screenings loved Benchley, and a star was born. A still from How to Sleep was used in Simmons ads. Only the Mellon Institute wasn’t pleased, pouting over MGM mocking their study—spoilsports! But audiences were pleased as punch with Benchley, leading to a contract with MGM from 1935 to 1944, and an Oscar for Best Short Subject, Comedy, for How to Sleep. 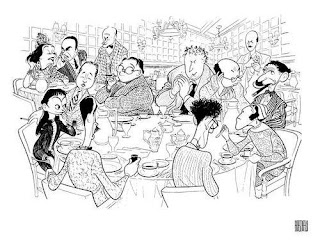