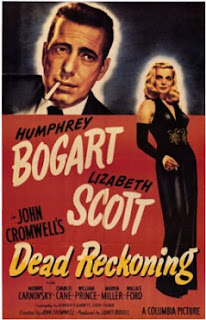 Many people celebrate Easter with colorful eggs; candy; church; bonnets and similar festive finery; a nice dinner with (or even without) their family; and Easter-oriented TV shows and films. Team Bartilucci’s celebration also includes watching the 1947 Humphrey Bogart film noir Dead Reckoning (DR). After all, DR takes place during Easter weekend, hence the subtitle above! If Bogart had ever opted to film one of Mickey Spillane’s Mike Hammer thrillers, it would have turned out like DR. Although director John Cromwell (the 1934 version Of Human Bondage; Anna and the King of Siam; the 1937 version of The Prisoner of Zenda; Caged, among others) didn't actually base DR on a book, this tautly-directed suspenser owes more than a little of its plotting and characterization to earlier classic crime novels-turned-classic Bogart movies. Indeed, when Vinnie entered the room the first time I watched DR on TCM, he began watching it with me and soon asked, “Is this The Big Sleep, or The Maltese Falcon?” However, DR is steeped in the kind of bitter post-war viciousness that distinguished Spillane’s writing — not that there’s anything wrong with that!


Bogart commands the screen as Warren “Rip” Murdock, a former Army paratrooper (lots of colorful references to parachutes and jumping here) and one of the most misogynistic good guys Bogart ever played. Who can blame Rip, after the wringer he’s put through in this film? Captain Rip tries to find out why his Sergeant and best pal Johnny Drake (William Prince from Destination Tokyo; the Oscar-winning 1950 Jose Ferrer version of Cyrano de Bergerac, playing Christian; Cinderella Jones; and regular roles on TV soap operas such as The Edge of Night, Search for Tomorrow, and Another World) happens to have a Yale pin with the name “John Joseph Preston” on it, and more importantly, why Johnny bolts rather than accept the Congressional Medal of Honor for his wartime heroism, to his peril. It turns out Johnny had been accused of murder before he hightailed it out of town and enlisted under an alias. Johnny’s trail ends in a fatal car crash, but Rip’s trail of vengeance has just begun. Indeed, Johnny’s ultimate fate haunts the film like a ghost, and Bogart’s performance is both rugged and poignant as he turns amateur detective in order to make sure his friend is posthumously cleared and the real killer nailed.  Rip’s investigation leads him to , Tropical Paradise of the South. Don’t take my word for it, check out the neon sign in the upper right-hand corner of the screen in the opening establishing shot! Soon Rip is sucked into a whirlpool of murder, Mickey Finns disguised as Ramos Gin Fizzes, flashbacks, secrets, mysterious codes, double-crossing, and such inventive mayhem as tossing “creeping jelly” grenades (a German precursor to napalm) at sinister smoothie Martinelli (Morris Carnovsky, Yiddish theater stalwart and blacklist victim) and his music-loving psycho henchman Krause (Marvin Miller from the 1950s TV series The Millionaire, as well as the voice of Filmation’s Aquaman) to make them talk.


Standing in for quintessential Bogart leading lady Lauren Bacall — and original leading lady Rita Hayworth, who got hung up making The Lady from Shanghai with then-hubby Orson Welles — is Lizabeth Scott as Johnny’s sweetheart, Coral Chandler, who has an air of jasmine and mystery about her. To paraphrase Double Indemnity, how was Rip to know murder could smell like jasmine? It’s soon apparent that Coral knows more about Johnny’s fate than she’s telling. She’s the kind of dame that guys go gaga for against their better judgment. This sultry chanteuse (singing dubbed by Trudy Stevens) has so many pet names from her various beaus that the first time I saw DR, I wasn’t quite sure whether her name was “Coral,” “Dusty,” or of all things, “Mike” (after Mr. Hammer, perhaps?)! Don’t get me wrong, Lizabeth Scott fans, I like her, but I’m afraid that to my ears, her husky voice always sounds more phlegmy than sexy. Every time Scott speaks, I half-expect someone to offer her a cough drop! But although Scott is no Bacall (who among us is?), she’s nevertheless chock full of luminous blonde beauty, plus she has an enchanting smile and an air of wounded vulnerability that makes me empathize with her in spite of myself. 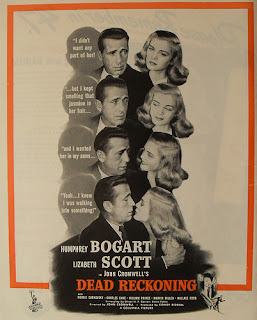 Perhaps because five writers worked on the script, including Steve Fisher of I Wake Up Screaming fame, DR is filled to the brim with memorable dialogue — and is often deliriously, gloriously nutzoid. For instance, Bogart’s speech to Scott early on about how men should be able to reduce women to pocket-size when necessary, and Scott’s interpretation of this theory, must be heard to be believed (http://youtu.be/bL1X3s1R0cE). But when DR works, it’s dynamite — literally, when Rip and the lovely “Mike” join forces with safecracker and explosives expert McGee, played by scene-stealing Wallace Ford (Freaks; All Through the Night; Spellbound; Crack-Up, and more)! Even when the situation gets ugly, this movie is always gorgeous to look at, thanks to the stunning use of shadows and light in Leo Tover’s black-and-white photography. Also, keep your eyes peeled for two brief but memorable uncredited performances: grown-up Matthew “Stymie” Beard of The Little Rascals fame as a bellboy stiffed out of a tip by cheapskate cop Charles Cane; and Ruby Dandridge, Dorothy’s mom, as Coral’s lovable maid Mabel! If you love Bogart and you like your film noir grim yet glamorous and over-the-top at times, DR is well worth a look, so break out the night-blooming jasmine, grab a tall, cool Ramos Gin Fizz (hold the knockout drops, please) and enjoy! 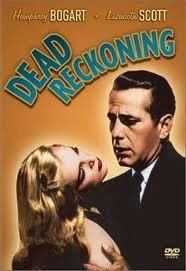