X: THE MAN WITH THE X-RAY EYES: I’m Looking Through You

In honor of the Roger Corman Blogathon, created by fellow blogger Nathanael Hood of Forgotten Classics of Yesteryear, Team Bartilucci is blogging about X: The Man with the X-Ray Eyes (1963).

Dorian's View:
The X... DVD includes a great commentary track by the sepulchral-voiced Corman himself, as well as the movie’s trailer and its original prologue, which comes across like a well-done documentary about people and their senses. Vinnie quipped, “This could turn into a nudist flick any minute!” In voice-over, we learn how people compensate when any of their senses no longer function (we see a deaf man using sign language and a blind man with his Braille Reader). Suddenly Ray Milland stumbles onto the screen, and we’re startled to see that his eyeballs are pitch-black—not as freaky as the opening Corman eventually opted for in the theatrical release, a long tight shot on a bloody eyeball, but either way, X… grabs your attention and doesn’t let go!
Ray Milland had always said that The Lost Weekend and X… were the films that he’d been the most proud of during his long acting career. I can understand why; both movies hit you in the gut, the heart, and the mind. Milland plays Dr. James Xavier, a dedicated doctor and medical researcher. As is often the case in Corman’s movies, Jim’s an outsider, a maverick. His unorthodox but brilliant experiments in ophthalmology attract wary looks and accolades in equal measure. He’s developing an eye-drop formula that could bring human eyesight to another level, one that would enable physicians to help their hospital patients by literally “seeing inside them, as if they were windows…seeing their sicknesses with a clarity that would make X-rays a tool fit only for witch doctors.” Jim and his supportive, attractive colleague Dr. Diane Fairfax (stage actress Diana Van der Vlis) test Jim’s eye-drop formula on a cute little monkey in their lab—but the poor critter dies after getting, um, super-vision. “What did he see? What did he see?” the worried Diane wonders. She and their friend and colleague Dr. Sam Brant (Harold J. Stone) are supportive, but the skittish higher-ups who run their hospital cut off Jim’s funding. Jim decides to eliminate the middleman by experimenting on himself. Didn’t he learn anything from The Invisible Man, Dr. Jekyll, Andre Delambre, and so many other well-meaning but ill-fated scientists who came before him?

It’s all fun and games when Jim is able to see through party guests’ clothing thanks to the magic of Spectarama, a photographic gimmick that makes Jim’s X-ray viewpoint look kinda like those colorful crystal prism suncatchers you find in New Age novelty shops. Kudos to Diane for having a sense of humor about this wacky episode! (I got a kick out of the doctor guests using syringes to mix their cocktails.) Milland and Van Der Vlis have a charming, sophisticated chemistry together, making them a delightfully urbane couple. But when a fatal accident propels Jim into the life of a fugitive (director of photography Floyd Crosby does a great job here, especially with the suspenseful, claustrophobic scene where Jim flees down flights of stairs), X… becomes increasingly tense and thought-provoking. Jim doesn’t have a moment’s peace one way or another; he can’t even close his eyes to sleep because of his X-ray vision (note the progressively larger, darker, clunkier sunglasses he wears over the course of the film). When Jim snaps, “Get out of my sight,” you don’t know whether to laugh or cry, because that’s literally impossible for him now! The peril of playing God is a time-honored trope, but Corman and screenwriters Robert Dillon and Ray Russell do a great job of blending parables, suspense, and science fiction. Les Baxter’s quicksilver musical score ably covers the many moods of X… In addition to being a box-office hit, X… won the 1963 Best Film Award, The Silver Spaceship, at the First International Festival of Science Fiction Films.

This tight, tense, thought-provoking science fiction thriller packs a wallop, with excellent performances all around. Don Rickles was a revelation in a rare dramatic role as Crane, a sleazy carnival barker who makes the most of our beleaguered hero’s X-ray vision by casting him as “Mentallo” in a mind-reading act. Keep an eye out for Corman regulars Dick Miller and Jonathan Haze in the Mentallo scene, as well as an earlier scene with uncredited bits by character actors Morris Ankrum (I Wake up Screaming, Lady in the Lake) and John Hoyt, the most angular man in show business (My Favorite Brunette, When Worlds Collide, The Bribe, TV’s Gimme a Break).

Vinnie's View:
This is rather an interesting change for us, 'cause it's the first time The Wife and I are writing about the same film. While her milieu is more the noir films, tongue-in-cheek thrillers, and other more respectable genres of film, I lean more towards the science fiction and fantasy areas, with a sub-major in comedy. So upon hearing about the Corman-a-thon, I took the initiative and suggested this film. I knew there'd be a dogfight for Little Shop, but X had always held a place in my heart for being a great example of what can be done under the guise of a simple B-picture.

After quite a bit of television work, Ray Milland made three films in rapid succession over two years for American International: The Premature Burial, one of Corman's Poe adaptations; Panic in the Year Zero, a classic Cold War thriller in which the bomb drops on L.A. and the people must do the best they can afterwards (which Milland also directed, and another film which I could go on about for quite a while) and the film we're discussing today, X: The Man With X-Ray Eyes. Milland took to the fast-paced world of independent film-making easily; Corman describes him as a good man to work with, and utterly professional.

Co-writer Ray Russell came out of the gate with a first script that was also a far better film than it's remembered being, William Castle's Mr. Sardonicus, based on Russell's own novella. He followed this up with The Premature Burial, and another all-but-forgotten madcap classic for Castle, Zotz! So he came onto X with a short but solid resume. Corman's initial concept was for a jazz musician to gain the titular powers after excessive illegal drug use; the final idea of a research scientist experimenting on himself gave them the ability to examine the question without being forced to portray the drug as "evil".

Milland does not play Dr. Xavier as a "mad scientist." His experiments are solely for the benefit of mankind, as he displays early in the film, where he corrects John Hoyt's diagnosis of a young girl's heart ailment by looking into her and finding a tumor that escaped being caught on x-rays. The implication is that continued use of the drops may cause mental instability, which seems the case when in a fit of anger he knocks his friend and fellow Doctor Sam Brant (played by character actor Harold J. Stone) out a window. 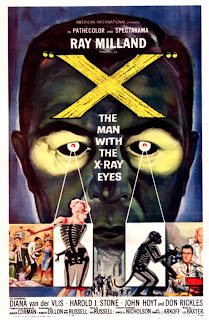 A theme throughout the film are the ways that people would use the ability to see beyond the visible spectrum. Diane has to ask what the practical uses would be; Xavier uses them to save the young girl's life. It's only after he's forced to play the fugitive that he explores the more mercenary advantages of the power. He hides out in a carnival, hiding in plain sight as a mentalist; people naturally assume his ability to see people's secrets is a simple sideshow con. One carny presumes that the power couldn't be real; if it were, such a person could rule the world with it. But Don Rickles (who damn near steals the film as the carnival barker Crane) realizes that the trick is no trick at all, and has an idea on how to exploit it. He opens up an office in the Skid Row area and lets the word spread that Xavier is a "healer", and doesn't charge for a consultation, but will happily take "Donations." It's an interesting scenario; he's taking advantage of the poor people's simplicity and fear of hospitals, but Xavier is giving them solid medical info. Dr. Fairfax tracks him down after a number of people come to her practice with exactingly correct diagnoses for their ailments. As he grows more desperate, only then does he use his abilities where everyone else would have gone first: Las Vegas. By this point the pressure is getting to him, and he grows swaggering and arrogant as he wins hand after hand. Bad move, as when they challenge him on his skills, he loses his protective goggles and reveals his transformation, shown through a pair of Sclera lenses that must have hurt like hell.

This film was shot in a mere 15 days of principal photography, a schedule Corman describes as luxurious for him, as most of the time he would shoot in 10. But even there, he had the time to make the film look bigger than it had a right to be. He drove to Vegas and the Long Beach carnival pier with his cameraman to get enough B-roll footage to make the end of the film look like the cast were there as well. To show the way Xavier saw the city, Corman got second-unit footage of buildings still under construction, cutting them together to make it look like the doctor was seeing the facades vanish, revealing the girders beneath.

Corman is legendary for his work, and for the people he's mentored into Hollywood's upper echelon. Ron Howard got to talk about him when he got his honorary Oscar in 2009. I include the speech here as a testament to a man who can squeeze a nickel and get two dimes, and take an idea about a guy that can see naked people and get a classic.