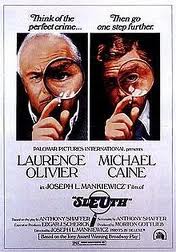 This post, Sleuth: Doppler Jeopardy, is my entry for the Vivien Leigh and Laurence Olivier Blogathon, hosted by Kendra Bean.

(Warning: You may find Spoilers amongst the clues!)

In honor of our Fearless Leader Kendra's Vivien Leigh and Laurence Olivier Appreciation Blogathon, we of Team Bartilucci are proud to participate by saluting one of our absolute favorite films of all time: the 1972 film adaptation of Sir Anthony Shaffer's diabolically suspenseful, witty international stage smash Sleuth.

Dorian says: Vinnie was particularly keen to participate, having loved Sleuth even before I did, so props to my dear hubby for writing the lion's share of this post! Director Joseph L. Mankiewicz of the Oscar-winning All About Eve (among so many other smart, entertaining movies) was a top-notch choice to direct the film version. Cole Porter songs are sprinkled throughout John Addison's sprightly, playful Oscar-nominated score. Ken Adam's production design for Andrew Wyke's grand home, Cloak Manor, is mouth-watering; we want to live there when we grow up! Mankiewicz’s dark, twist-laden, cracking good comedy-thriller works on many levels, including as an indictment of the class system. Too bad Sir Laurence Olivier and Michael Caine couldn’t have won some kind of Team Oscar for their work in this one; you know, like the Screen Actors Guild Awards. In 2007, Sleuth was remade with Kenneth Branagh at the helm, with Caine now in the Olivier role and Jude Law in Caine’s original role.  A great remake is rare (the best ones that leap to mind are the 1941 Maltese Falcon and the 2001 Ocean’s Eleven), but the first half of the Sleuth remake was sleek and entertaining, until it suddenly took a bizarre wrong turn into gay-bashing and humiliation—not our idea of fun! In the meantime, you can still find copies of the out-of-print DVD edition of Sleuth on Netflix or even your local video store, so by all means seek it out!  Take it away, Vinnie!
Vinnie says: In a perfect world, a mystery should keep the audience guessing. With enough twists and turns, you shouldn't have a clue (pardon the choice of words) of the outcome, while still playing fair enough that a viewer might succeed, or could at least admit that he could have once the facts were laid out in the dénouement.

Sleuth has an unfair advantage. It's not a mystery. There is no murder (OK, there's one), so there's no need to play fair with the audience. There are only two men, one pompous and petty, the other angry as hell, in a long game of cat and mouse. The scenes play out so long that your confidence that things are as they are is stretched just past the point of confidence, and as soon is it is, they pull the rug out from under you.

Sir Laurence Olivier plays Andrew Wyke, endlessly award-winning author of the St. John Lord Merridew mysteries. Andrew is a classic upper-class British aristocrat, and has filled his home and his life with an obsession for games, puzzles and other things used by the insufferably intelligent to prove they are smarter than "ordinary people." He's dictating the end of his latest mystery as the film begins, safely hidden within his vast garden maze, which is of course rigged with cheats so he can win. He's met by Milo Tindle (Michael Caine), a hairdresser who's been having an affair with Andrew's wife Marguerite. Andrew is remarkably polite and accepting of the situation; indeed, he wants to arrange a scenario where everyone wins.

Andrew lays out the board simply: if Milo runs off with Marguerite, she'll need a divorce, and she will take Andrew for far more than he wishes or feels she deserves. However, if Milo plays the role of a burglar, steals a large cache of Marguerite's jewelry from the house safe, and fences them with a gentleman whose contact information Andrew will supply, Andrew will be able to get reimbursed for the loss from his insurance, Milo and the lovely Marguerite will end up with more money than they would from a divorce (especially since it'll be under the table and tax-free), and everybody can walk away whole and unravaged by the law. Milo agrees, and Andrew drags him about the house in a mad pantomime of a robbery, dressing him in a clown costume, walking him through the robbery and guiding him as to what bits of the house he should upset to make it look as if a scuffle has taken place. This last portion is where Milo chooses to stray from the script and get a tad more zealous in his disarraying activity.  (Dorian says: As writers ourselves, we can empathize with Andrew's dismay as Milo tossed his new manuscript all over Andrew's luxurious home! OK, back to Vinnie!)

Things take a turn for the hearse when Andrew points his gun at Milo and informs him that this has all been a plan for Milo to incriminate himself as a burglar, so that Andrew could legally shoot him in defense of his home. Dropping the friendly attitude he's had through the larcenous romp, he declares himself so far above Milo in station and intellect that he barely considers this to be murder. He fires the gun at the base of Milo's skull, Milo tumbles down the stairs of the living room in a crumpled heap, and Andrew calmly heads back downstairs to tidy up.

It was at this point in the stage play that Alan Bates left the theater after being offered the role of Milo, as he thought a character that dies midway through the story a la Psycho was beneath his position as an actor. In fairness, he's not the first to have jumped to that conclusion. (Though it does show that it's wise to sit through the entire play before making up your mind!)

The narrative continues an unspecified period of time later. Andrew is puttering about his home, alone (as he always is — we never meet his wife Marguerite, save for her portrait, painted to resemble Joanne Woodward) when the doorbell rings. It's Inspector Doppler (Alec Cawthorne) who comes to ask about the mysterious disappearance of one Milo Tindle. At first feigning any knowledge of the man, when the Inspector presents a note in Andrew's handwriting, found in Milo's home, asking that they meet, Andrew is forced to put his cards on the table. Milo, he explains, was here, put through a series of escapades, and finally, Andrew shot him.

The entire affair was to put Milo through such terror and humiliation as to find out his true mettle, to see if he was "worthy" of his wife. Andrew decided he was, and when he awakened, Milo was allowed to leave, if not with his pride intact, at least his head.


The inspector is appalled to learn that someone could play such a ghastly trick on another person, and insists that he inspect the home. Andrew agrees happily, but when Doppler begins to find evidence of a far more serious act than a mere April Fool's trick (blood on the stairway, Milo's clothes balled up at the bottom of the wardrobe), he puts forth the theory that Andrew had, in fact, killed Mr. Tindle, albeit accidentally, and has disposed of the body to make the problem vanish. Andrew is dumbfounded and protests his innocence, insisting that his tale is true, and more than a little offended that this flatfoot wouldn't just take the word of a gentleman at face value and leave. As he begins to panic that he may be arrested for a crime that never even happened, let alone one he didn't commit, Doppler lowers the boom. He begins to remove makeup and padding, standing revealed as...Milo Tindle (Caine)! With the help of some stage makeup artist mates and a key he obtained from another acquaintance, he set up this charade to take Andrew to that point of fear for his life that Milo experienced. Andrew begins to regain his composure, and immediately starts shoring up the levees that his panic nearly burst. He knew it was Milo all along, was playing along to give him the fun of the game, a verbose version of "I let you win." (Dorian says: Surrrre you did, Andrew.... See how you like it, buster! Back to Vinnie!))

And that's when Milo reveals Act Two. While at the house to set up the evidence, he met Andrew's mistress, a young bit of stuff named Téa. They spoke, she had no problem believing that Andrew would play such a trick, Milo shags her rotten...and then strangles her. He then explains that he has contacted the police. They will be there within the hour to ask Andrew about, not Milo's disappearance, but Téa's. And Milo has planted three pieces of incriminating evidence about his palatial home to connect Andrew to the murder . He's sure the police will find them soon enough, but for Andrew to do so within this tight time frame, he'll need to play Milo's game.

The film ends with one dead body, police at the door, and the laughter of Laurence Olivier over some jaunty harpsichord music. And we haven't spoiled the ending at all.

While they give credits for several actors (including the aforementioned Alec Cawthorne, which is "a virtual anagram" of the words "or Michael Caine" if you manipulate a couple letters), it's a two-man play, and both Olivier and Caine were nominated for Oscars, among other major awards. Anthony Shaffer won a Tony and an Edgar, among other prizes. Sleuth rivals Deathtrap as the perfect comedy-thriller.

Kenneth Branagh remade Sleuth in 2007, with Caine graduating up to Sir Larry's role and Jude Law stepping into Milo Tindle's pricey Italian loafers. The first half of the film is very well done, with many technological upgrades to make Milo's attempted robbery all the more embarrassing, and the threat of murder after the act more realistic and less imperious. But alas, the last act descends into an overlong game of "Fag."

Perhaps it wasn't called that in your circles. Back in the days of childhood, before we Knew Better, boys would go to great lengths to get their friends to admit that at times, in the secret part of their heart, they'd thought that that guy was attractive, or that they'd wondered fleetingly wht it might be like to touch certain things or have certain things in their mouth. As soon as they would, the other assembled friends, who attoseconds before were swearing it was just between them, no one would mock anyone, lifted their fingers and pointed like Donald Sutherland at the end of the 1978 version of Invasion of the Body Snatchers and scream "FAAAAAAAAG!!!!!!!"

It's annoying, outdated, and shoehorned in from so far out in left field that it makes one want to wash. In short, it can't hold a candlepin to the original. The 1972 version of Sleuth holds up today, and can still surprise new viewers. It is worth missing a hand or two of cards and watching.

Wow, I think this may have been one of Team Bartilucci's most prolific writing weeks to date! After you've read (and enjoyed, we hope!) our Sleuth blog post, feel free to visit Tales of the Easily Distracted for our very recent post about James Garner, "Discretion is the Garner Part of Valor."