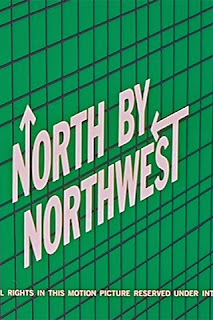 This post has been revamped and republished for the CMBA Blogathon: Film Passion 101, from December 1st through December 6th, 2013. Enjoy!

Danger: Beware of Spoilers!
For me, my fascination with Alfred Hitchcock first started with my sister having the flu.  My big brother let me stay up with him to watch Strangers on a Train—half of it anyway, once Mom put me back to bed.  But it was like a “gateway drug” for movie fans, and the biggest score of all was North by Northwest!  It all began when composer Bernard Herrmann (On Dangerous Ground; Vertigo; Psycho) introduced his friend, screenwriter Ernest Lehman (Sweet Smell of Success; West Side Story; Sabrina), to director Alfred Hitchcock.  As Lehman explained, “I sat in my office, trying to construct a story which began at the United Nations…I said, ‘I want to make the Hitchcock picture to end all Hitchcock pictures.  Something that has wit, sophistication, glamour, action, and lots of changes in locale…And that’s when I started writing.”  Well, Lehman did all that and then some, in my absolute favorite film of all time, which also happens to be my favorite Alfred Hitchcock film:  North by Northwest (1959).  When there weren’t enough Hitchcock movies available in theaters or on home video (remember Blockbuster and such?), I filled the gap as best I could with Stanley Donen’s own delightful comedy-thrillers: Charade; Arabesque; Mirage; and Who is Killing the Great Chefs of Europe?, also penned by Peter Stone.  Silver Streak was also a favorite of mine during its original theatrical run, when I was a fresh-faced lass of 13.  I was eager to see more of Hitchcock’s own films, but at that point in time, few if any of us Average Joes and Josies owned VHS players, and DVDs weren’t even a twinkle in technology’s eye yet. Therefore, if I wanted to watch honest-to-goodness classic Hitchcock movies, I had to wait for them to turn up on TV, often in the wee hours of the night , or sometimes I’d be lucky enough to find them playing at one of the many revival theaters operating in my hometown of New York City back then.

Believe it or not, I first saw the Hitchcock film destined to become my all-time favorite in a tiny movie theater in midtown Manhattan. Appropriately enough, it was called The Mini Cinema. As I recall, it was in a brownstone; I only remember maybe twenty seats in the screening room. I was there to see North by Northwest, having heard it was one of Hitchcock’s very best films. Well, they had me at Saul Bass’s sleek green skyscraper in the opening credits!  The print was excellent, and all of us in the audience were enthralled.  By the time the film ended and I emerged into the sunshine, I was in love. So a short time later, when my mom took my friends and me to see Silver Streak at East Tremont Avenue’s now-defunct Interboro Theatre — so named because it straddled the Bronx/Manhattan border — I was just film-savvy enough to pick up on Silver Streak’s tips-of-the-hat to Hitchcock’s The Lady Vanishes, Strangers on a Train, and of course, North by Northwest.

In the 1950s, Hitchcock was at the peak of his powers with Strangers on a Train, Dial M for Murder; Dial M for Murder; Rear Window; The Trouble with Harry (more renowned in France at the time); the 1956 remake of The Man Who Knew Too Much; To Catch a Thief, and Vertigo (even if the latter wasn’t fully appreciated until years later). But North By Northwest was truly the jewel in Hitchcock’s crown at that time; heck, it’s still the champ as far as I’m concerned!  MGM originally wanted Hitchcock to film Hammond Innes’s The Wreck of the Mary Deare from a Lehman script, but both men soon realized they were far more interested in making North by Northwest.  Slyboots that Hitchcock was, he and Lehman devised a way to slip out of …Mary Deare by colorfully describing the high points of North By Northwest to the MGM brass, leaving them thinking they’d get two Hitchcock pictures!

… Mary Deare was eventually filmed by Michael Anderson, and everyone got what they wanted—except James Stewart. According to the IMDb, while Stewart and Hitchcock were filmimg Vertigo, Hitch gave Stewart a taste of what he had in mind for North By Northwest.  Stewart was hooked—but as much as Hitchcock liked Stewart, he felt (rightly) that Cary Grant was the ideal choice for the lead.  Rather than disappoint his old friend and frequent leading man, Hitchcock delayed production on North By Northwest until Stewart found himself committed to shooting Otto Preminger’s Anatomy of a Murder—and then he offered the role to Stewart, who of course had to turn down the offer by then. Oh, that Hitchcock—such a finagler!

The opening credits alone sweep us viewers into the action before the bad guys even show up. Saul Bass’s sleek opening credit sequence works beautifully with Bernard Herrmann’s fandango-style opening theme, swirling tempestuously along as Manhattan’s bustling citizens rush into subways and taxis—except for that distinguished, imposing gent who’s just missed the Fifth Avenue bus. Yep, it’s Hitchcock himself, literally trying to catch up with the credits. This is New York City, all right, with its boisterous, cocky attitude, like this dialogue from Eddie,  the elevator operator:
Roger: “Say good night to the missus.”
Eddie: “We’re not talkin’!”


Just as well Hitchcock's cameo came early, because our hero gets few opportunities to relax and enjoy the film’s fabulous locations, what with the wringer he’s about to be put through! Talk about Mad Men: as Roger Thornhill, the ad man who became a bewildered red herring, Cary Grant’s romantic panache and flair for comedy perfectly suits our literally dashing hero, Roger O. Thornhill. The “O” stands for "nothing", much like Roger himself at first.  He’s a charming, slick executive who's used to having his own way in business and the boudoir, judging from the fact that he’s been married twice and is currently wooing a new gal with “candy from Blum’s. Each piece wrapped in gold paper. She’ll like that; she’ll think she’s eating money.” Indeed, those aforementioned opening credits move at a rapid-fire pace, almost like one of the screwball comedies Grant made with Howard Hawks in the 1930s and ‘40s.

We see that Roger is a man of smooth confidence, always in charge—until that fateful day at The Plaza Hotel’s Oak Bar when the name “George Kaplan” is called out at the wrong time, turning our hero’s life upside down!  Roger has barely had time to knock back his cocktail before he’s kidnapped by the coolly sinister henchmen of a suave gent calling himself Townsend (James Mason of Lolita; 20,000 Leagues Under the Sea; and Team Bartilucci’s Suave Hall of Fame!).  It seems these wicked jaspers are convinced that Roger is really George Kaplan, a government agent, and they’re not playing on Kaplan’s team. Roger is outraged and bewildered, but his frustrated insistence that “I’m not Kaplan!” falls upon deaf ears. Instead, Roger gets bourbon forced down his throat in Townsend’s Glen Cove home, thanks to reptilian henchman Leonard (Martin Landau before TV’s Mission: Impossible and his Oscar-winning performance as Bela Lugosi in Ed Wood), and is nearly killed in a drunk-driving frame-up.  From there, things go from bad to worse as Roger’s visit to the U.N. to confront Townsend results in more mistaken identity and worse: our hero gets framed for murder!  And so the chase begins, monitored by a spymaster known as “The Professor” (Hitchcock favorite Leo G. Carroll, looking remarkably like one or both of the Dulles brothers)!

North By Northwest is truly the Hitchcock film to end all Hitchcock films, with all his pet themes covered with maximum wit, panache, and suspense: a wrongly-accused hero on the run; mistaken identity; a romance between Roger and soignée spy Eve Kendall (played by On the Waterfront Oscar-winner Eva Marie Saint in a sexy-cool change of pace) that's tender, sensuous, and full of surprises, on a chase that takes our hero from New York to Chicago to Mount Rushmore.  Fun Fact:  Hitchcock took our gal Eva Marie to Bergdorf Goodman in New York City for a fabulous new wardrobe for her, all seen in the film (look sharp in the scene where she’s wearing the red dress; you can see the Bergdorf label).  In the movie’s extras, she playfully called Hitch “my one and only Sugar Daddy.”  But as engaging and dashing as Grant is, the smoothly villainous James Mason nearly out-suaves him.  My husband Vinnie and I have joked that if Mason had played Roger O. Thornhill, the film would have been over in minutes. With all due respect to Grant, if the imperious, unshakably confident Mason asked the Glen Cove police, "Do you honestly believe that this happened the way you think it did?", they would immediately reply, "Er, no, sir, you must be right, you're free to go, sorry we bothered you." 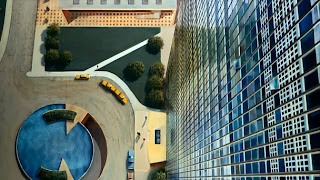 North By Northwest was nominated for Oscars for George Tomasini’s film editing, the art direction and set decoration of Robert F. Boyle (who you may remember from the sterling documentary Something’s Gonna Live), Merrill Pye, William Horning, Henry Grace, and Frank McKelvy (but not Best Director or Best Score, alas). Best of all, North By Northwest was nominated for Lehman's screenplay; in fact, he borrowed from it liberally for his suspenseful, rollicking script for the film version of Irving Wallace’s The Prize, starring Paul Newman!

For more information about North by Northwest, here's a post I wrote about the 2001 Oscar nominee The Man on Lincoln’s Nose; and the 2010 documentary Something’s Gonna Live, produced by Norman Jewison.