A Night At The Opera – Here comes Sanity Clause!

This post is for The Fabulous Films of the 30s Blogathon, Hosted by CMBA, from April 27 through May 1, 2015!
Starring The Marx Brothers: Groucho Marx, Chico Marx, and Harpo Marx.
Co-starring Margaret Dumont, Kitty Carlisle and Allan Jones
Director: Sam Wood (1934)

Fantasia in Radio City Music Hall!  Especially “What’s Opera, Doc?” with Elmer Fudd singing “”Kill the Wabbit” over the Ring Cycle (no hobbits in sight, of course, this was the ORIGINAL Ring tale, but that’s, you should pardon the expression, another story) Call it a “Gateway drug” if you like except it’s not illegal -- you only get high on music and comedy.

Likewise, odds are most classic comedy fans’ look at opera was likely from the Marx Brothers masterpiece, A Night at the Opera.  I’ve been a fan of The Marx Brothers since my older siblings showed me their comedies when I was in kindergarten!  They sat me down to watch The Cocoanuts, with also introduced me to Kay Francis with each new zany antics, including, where I also discovered Kay Francis.  I rarely find a Marx Brothers comedy that I haven’t liked, but A Night at the Opera is my hands-down favorite!

To say that Bugs and the Marx boys had parallels is an understatement.  Bugs had to work triple time, taking on aspects of all three of the Brother, from Groucho’s sharp tongue to Chico’s willingness to engage in a blow to the head, to Harpo’s sheer manic frenzy, ripping pants and coats all in the campaign to make his target look and feel an utter fool.

The Marx Brothers had settled into almost archetype roles for their films, and this is no exception.

Groucho, as Otis B. Driftwood; promoter and sometime con-man; ever sidling up to the ample bosom and bank account of Mrs. Claypool, played by film’s greatest straight man, Margaret Dumont

Chico Marx takes his heavily accented position as Firello,, kind of a wise guy, but sharp and well meaning.  He’s slightly less actively criminal this time around, but he’s clearly not above whipping out a leather cosh when needs must.

He is ever teamed with his “Silent partner” Tomasso, played by Harpo Marx, playing his traditional role of mute whirlwind of chaos.

As usual, Groucho starts alone, working his way into Mrs. Claypool’s best graces as primary patron of the city’s opera company, where he sets himself up with a cushy managerial position, careful never to actually hear any singing.  Keen to sign legendary European tenor Rodolfo Lasparri (not the one “of Palermo Sicily), for all of you who saw The Freshman) he meets Fiorello, who claims to manage “The greatest tenor in the world”. Of course, he’s not referring to The Great Lasparri, but his friend Ricardo (Allan Jones) who has no resume as a singer. But Lasparri has the hots for Ricardo’s girl, Rosa (Kitty Carlisle) and when he’s approached to sing, he says he won’t go to New York without her.

As zany as the boys can be, they can also be kind and helpful to their friends, so at this point, Lasparri become the Marx’ “Special friend” (as the Marx-channeling Warner Brothers called their targets of torment on Animaniacs) and he becomes the target of their own special brand of War of Nerves.  At the same time, Groucho has to keep Mrs. Claypool’s cheeks blushing, and keep his opposition for her charms and bankbook, Gottlieb (Sig Ruman) off balance.

The trip back from Europe provides us what may be one of the greatest scenes of physical comedy in a Marx Brothers film, and possibly any film ever, The Stateroom Scene.Two and a half minutes of filmic perfection.

The setup is simple – Driftwood’s room on the ship is calamitously small – so much so that it can barely accommodate himself and his monstrous steamer trunk, which is itself accommodating stowaways Fiorello, Tomasso and Ricardo.  So as more and more people arrive to do various work in the room, it become increasingly sardine-like.  To this day it’s one of the only scenes of black-and-white film that our daughter Siobhan will willingly sit through, and no surprise why.

Graham Linehan, creator of classic British sitcoms like Father Ted and The IT Crowd, points out a theory of sitcom scenarios from Griff Rhys-Jones – the characters in a sitcom must be trapped, or otherwise stuck together, or why else would they stay with people they hated?  That adds another layer of comedy to the scene – all throughout the scene, Groucho is trying to prepare for an intimate dalliance with Mrs. Claypool, resulting in a moment of surprise when she arrives.

When the company arrives in New York, there’s the matter of the ship being three Italians heavy.  So the boys pose as visiting Russian aviators, allegedly fresh from a grand adventure.  After a speech at City Hall goes south, the stowaways are on the run, and with a policeman hot on their trail, it becomes very difficult for Groucho to keep all his oars in the water.  Not as famous as the Stateroom Scene is the sequence where the crew must shell-game a series of cots between two hotel rooms to keep Detective Henderson off kilter.

The final reel is sheer Marx madness as a massive plot is hatched to get revenge on all those who have wronged them, get the starcrossed lovers back together, and get Driftwood back into Mrs Claypool’s arms and trust fund.

The manic action of a Marx Brothers movie is met equally by the wit of the dialogue.  Groucho has a free-range tongue, and from it comes some of the most perplexing verbiage ever heard on film, leaving the stage littered with confused targets:

Otis B. Driftwood: That woman? Do you know why I sat with her? Because she reminded me of you.
Mrs. Claypool: Really?
Driftwood: Of course, that's why I'm sitting here with you. Because you remind me of you. Your eyes, your throat, your lips! Everything about you reminds me of you. Except you. How do you account for that? (to the camera) If she figures that one out, she's good. 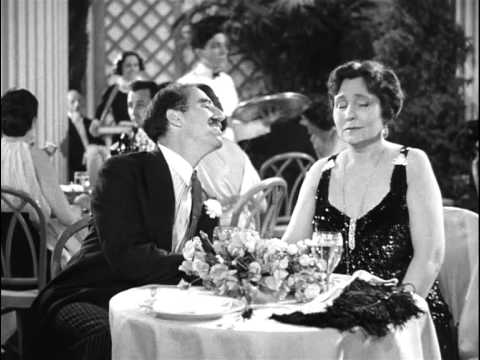 Decades later, Dennis Dugan directed a truly under-appreciated remake of this film titled Brain Donors. Set in a ballet company instead of opera, it features John Tuturro in the Groucho-esque role of Roland T. Flakfiser, Mel Smith as Rocco Melonchek and hybrid stand-up comic Bob Nelson standing in for Harpo as Jacques. Nancy Marchand, then known best from Lou Grant and now better known for The Sopranos steps in for Dumont as doddering dowager Lillian Ogelthorpe.  It more than satisfies the requirements that a remake must meet, and while it can never replace the original, it does a fine job of showing that classic comedy still holds up today.  Well worth a look