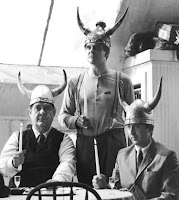 My smart, funny hubby Vinnie and I have our Team Bartilucci caps on for this week’s double dose of The Producers. We adore writer/director Mel Brooks’ madcap satire in all its forms: the original Oscar-winning 1968 movie; the Tony-winning 2001 Broadway musical; and the movie version of the musical! How’s that for blanketing the field?
Dorian: “Money is honey…He who hesitates is poor!”
I know more people who can quote lines from The Producers than lines from Shakespeare’s works; make of that what you will! J People seem to either absolutely adore or utterly despise The Producers. But most folks I know agree with Vin and me that this nutzoid farce has "Love Power," to quote the late, great Dick Shawn as the ever-groovy, scene-stealing LSD, a.k.a. Lorenzo St. DuBois. Outrageously impudent yet surprisingly tender at times, it’s no surprise that writer/director Mel Brooks' zany tale of schemers trying to produce “the worst play ever written” and profit from it won Brooks his Best Original Screenplay Oscar and became a comedy classic. Need I say it’s also one of our family’s longtime favorites?
Meet our rascally protagonist Max Bialystock (Zero Mostel), who’s had an epic string of bad luck in recent years: “You know who I used to be? Max Bialystock, King of Broadway, six shows running at once! Lunch at Delmonico’s. $200 suits. (Max gestures at his stick pin.) You see this? This once held a pearl as big as your eye. Look at me now. Look at me now! I’m wearing a cardboard belt!” Even Max’s comb-over has seen better days. It’s been years since Max has produced a hit Broadway show, and he’s been reduced to using his powers of persuasion — and wheedling, and bellowing, and conning — to “launch… (himself) into Little Old Lady Land” to seduce money out of his rich elderly female backers, giving them “one last thrill on their way to the cemetery.” Afterwards, he collects checks made out to “Cash” (“That’s a funny name for a play.”) from the unsuspecting old dears. The most aggressively horny of them all is Estelle Winwood as “Hold Me Touch Me,” who loves to play games where she both insults and sexes up Max as her chauffeur, naughty stableboy, etc. I used to wonder if Winwood was born old, God bless her; I’ve never seen her as a young woman in any of her many films! She lived to the truly ripe old age of 101, stealing the show in all of her movies that I’ve seen, including this one.

Enter one Leo Bloom (Gene Wilder), a meek young accountant sent to do the books for Max’s most recent Broadway flop. It innocently occurs to the studious, honest Leo that “under the right circumstances, a producer could make more money with a flop than he could with a hit” by raising $1 million, putting on a $60,000 Broadway flop, and keeping the rest when the play theoretically closes on opening night. Of course, if the play was a hit instead, the producer would go to the hoosegow, since there’s no way he could pay back all the backers. A light bulb goes on over Max’s head. After Max badgers, er, persuades Leo to be his partner, the book-cooking begins, the hunt for a surefire flop play commences, and the wacky shenanigans escalate! Max and Leo find their worst play candidate, Springtime for Hitler, written by addlepated Nazi playwright Franz Liebkind, played by the recently departed Kenneth Mars, a longtime Team Bartilucci fave. Thrilled, Franz waxes rhapsodic about his beloved Fuhrer: “Hitler, there was a painter. He could paint an entire apartment in one afternoon! Two coats!”  But that’s only the beginning of our heroes’ audacious, hilarious odyssey, as they hire flamboyantly gay transvestite director Roger De Bris (Christopher Hewett, best known as TV’s Mr. Belvedere when I was a youngster), the aforementioned LSD, Swedish-speaking sexpot secretary Ulla (Lee Meredith), and one of the craziest chorus lines in movie history. No wonder this screamingly funny, no-holds-barred comedy helped to put former Your Show of Shows writer Brooks on the map as a filmmaker.

Susan Stroman directed the Broadway production and was chosen to direct the film, but as has happened many times with adaptations of musicals, it felt very much like a filmed stage show, not really taking advantage of the larger stage.  Somehow, the scenes that DID venture outside, the performances of “We Can Do It” and “Along Came Bialy,” still felt flat and staged. Like so many before, the film is merely a good approximation of the stage musical.

A little bit of trivia is revealed by Stroman on the DVD commentary: at the close of the film as the camera pulls back to reveal the many marquees of Broadway, we see a bit of the Lunt-Fontanne theater’s marquee on the left; specifically, the letters “ANNE”. That’s a tribute to Mel’s wife Anne Bancroft, who had died shortly after the opening of the musical, last appearing in the Producers-centric episode of Curb your Enthusiasm.

To her dying day, The Wife’s Mom swore she had seen The Producers “in its first run on Broadway.” We tried endlessly to tell her it had started as a film, and she was patently mistaken, but no number of IMDb listings would change her mind. (We suspect that she’d innocently mistaken it for one of Mostel’s other Broadway hits.) It’s nice to know that we got to see it — I can only hope it was as good as the production she remembered. 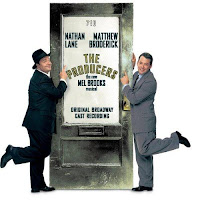 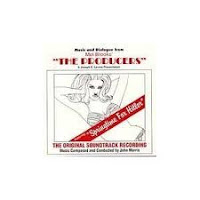