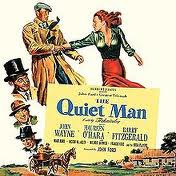 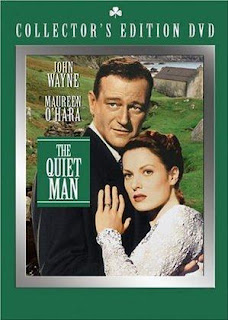 Those of you who’ve been reading TotED blog posts for a while now might be thinking, “‘The Quiet Man?’ Isn’t that an Irish romantic comedy with John Wayne and Maureen O’Hara? What, no Hitchcockian suspense, chases, guns, murder, derring-do?” Derring-do, no; action and tension along with the romantic comedy, aye! Based on Maurice Walsh’s short story, there’s a lot going on in director John Ford’s justifiably beloved 1952 comedy-drama both  action-wise and emotion-wise, including a memorable cast of characters and, in my opinion, the funniest, rowdiest marathon fistfight in movie history—take that, Fight Club!

The Quiet Man (TQM) has been one of our family’s favorite films since I was a kid growing up in New York City. My late mom’s side of the family is Irish-American, so every St. Patrick’s Day, our family would drive from the Bronx to Manhattan to see the big parade on Fifth Avenue. Afterward, we’d all eat at what was then our favorite Irish restaurant, Limerick’s on Second Avenue and 32nd Street, for a fine dinner including corned beef, steak, baked potatoes, Irish soda bread, and for the grownups, Irish Coffee. Nowadays, we of Team Bartilucci make our own corned beef and cabbage St. Patrick’s Day dinner at home, including my yummy (if I do say so myself) gluten-free Irish soda bread, and of course, we watch our 2002 Collectors’ Edition DVD of TQM, with all its wonderful documentary featurettes, including interviews with John Wayne’s grown children—all of whom traveled to Ireland with their dad and played roles in the movie, along with Ford’s veteran actor brother Francis Ford, and so many other friends, loved ones, and longtime colleagues in front of and behind the camera, including Ireland’s Abbey Players. The film is the richer for it; each actor, from star to bit player, is memorable and engaging. Our DVD includes a marvelous commentary track by Maureen O’Hara herself (Miracle on 34th Street, The Fallen Sparrow, The Hunchback of Notre Dame, and a great many other films with John Wayne, and so much more!) with all kinds of heartwarming, hilarious, and fascinating anecdotes about the making of the film. (Fun Fact: O’Hara took notes in shorthand for Ford in the script’s early stages.) How fitting that making TQM was a family affair for director John Ford, winning him his fourth Best Director Oscar (his other winners being The Informer, The Grapes of Wrath, and How Green was My Valley), especially since watching and quoting TQM have long since become a family tradition in our own home.

Filmed mostly on location in Ireland, with the film’s fictional town of Innisfree (or “Innishfree,” as it's often pronounced onscreen) played by the village of Cong in County Mayo, TQM was a labor of love for Ford and Company—and just like so many other cinematic labors of love now hailed as classics, Ford had a tough time getting it underway despite his enviable critical and financial success. Potential backers feared there wouldn’t be enough of an audience for Ford’s fairly simple, sentimental story (no Angela’s Ashes, this) about Sean Thornton (Wayne), born in Ireland, raised in Pittsburgh, PA, and now returning to Innisfree to stay. Along the way, Sean reconnects with such colorful local characters as tippling matchmaker and bookie Michaleen Ogh Flynn (Barry Fitzgerald, beloved in films ranging from Bringing Up Baby to The Naked City to his Oscar-winning turn in Going My Way, and more!); Catholic priest Father Lonergan (Ward Bond, one of Ford’s regular cast members), who’s been trying to catch the same bass for years; and Protestant Reverend Playfair (Arthur Shields, who was actually Fitzgerald’s older brother!), whose enthusiasm for boxing reveals Sean’s secret: in the U.S., Sean was prizefighter Trooper Thorn until he accidentally killed his opponent in the ring, leading him to quit boxing and live a, well, quiet life. Quiet goes out the window when Sean falls in love with spirited Mary Kate Danaher (O’Hara), whose temper is as fiery as her flame-red hair—and so are their love scenes. Not a stitch of clothing is removed, but the chemistry between Wayne and O’Hara has as much heat as a forest fire; no wonder the pair co-starred in five films together, as well as being close platonic friends offscreen! But it’s Mary Kate’s bullying older brother, “Red” Will Danaher (Victor McLaglen, whose wide array of memorable roles include not only his Best Supporting Actor Oscar nomination for TQM, but also Gunga Din, She Wore a Yellow Ribbon, and The Informer, for which McLaglen won the Best Actor Oscar in 1935), who really gets his Irish up. Will’s nasty temper and overall obnoxiousness blow up in his face after our hero asks to buy White O’Morn, the house Sean grew up in. The Widow Sarah Tellane (Mildred Natwick of The Trouble with Harry, The Court Jester, and Barefoot in the Park, among many others) takes issue with Will’s entitled attitude. Sean gets the house and a new enemy in Will. This is a bargain?

Sean and Mary Kate wed after the townsfolk pull a fast one on Will to make him think The Widow Tellane might become Mrs. Danaher. When Will finds out he’s been had, all hell breaks loose, and a battle of traditions begins as the loving but strong-willed newlyweds have to contend with overall culture shock; Will’s refusal to give Mary Kate her dowry and furniture; Sean’s refusal to fight back when Will gets in his face, and the resulting unfair accusations of cowardice; and, being an American, Sean’s difficulty in understanding why it’s so important to Mary Kate to have a dowry in the first place. She tries to explain that it’s not just about the money: “Ever since I was a little girl, I’ve dreamed of having my things about me…Until I have my things, I’m no married woman. I’m the servant I have always been.”  Will those roses Sean planted turn into a bed of thorns (with plenty of horse fertilizer), or will he realize sometimes you literally have to fight for what you want? Well, let’s just say there’s a reason the exciting, hilarious epic fistfight between Sean and Will is a classic!

It’s practically a miracle that TQM even got made! Wayne’s long-standing contract with low-budget Republic Pictures turned the tide, since its head honcho Herbert J. Yates wanted to upgrade Republic to a big-budget studio. Ford formed Argosy Productions and they signed a three-year contract with Ford and partner Merian C. Cooper (yep, King Kong’s Merian C. Cooper), but the antsy Yates wanted to make sure he got his money’s worth. So before filming TQM, Ford, Wayne, and O’Hara filmed Rio Grande (1950)—and it was a smash hit, resulting in a green light for TQM.  In addition to Ford’s Best Director Oscar, TQM also won for the gorgeous Technicolor cinematography by Winston P. Hoch and Archie Stout, with nominations for Best Sound and its art direction and set decoration. 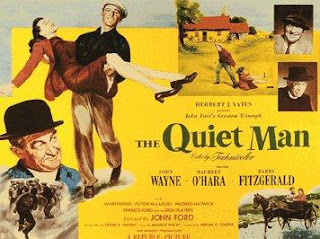