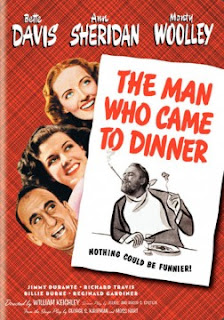 It all started with the famous Algonquin Round Table, where New York City’s elite would meet to eat, drink, and crack each other up with sly, witty bon mots. The most outrageous gadabout of them all was Alexander Woollcott, a larger-than-life character even by the Algonquin Round Table’s standards.  Woollcott was one of the most eminent critics and radio personalities of the 1920s and ’30s—and also one of the most maddening men you’d ever meet!  As author Jared Stone describes him in his 2006 book Moss Hart: A Prince of the Theatre, “While many prominent people called Woollcott a friend, he was also known for his acid tongue and demanding, impossible-to-please attitude. He could be charming and generous one minute; petulant and venomous the next.”

As Andrea Passafiume explains on the TCM Web site, Woollcott’s many notable friends included the very successful playwriting team of George S. Kaufman and Moss Hart: “One evening while Woollcott was visiting Moss Hart, he made an unusual request. He wanted Hart and Kaufman to write a new play for him to star in. Woollcott had dabbled in acting before, and thought that being in a play would be a new way in which to reach his massive audience.  Somewhat dubious, but not wanting to disappoint his friend, Hart agreed to give the matter some thought.”  Then Hart remembered an overnight visit with Woollcott in his country home.  Woollcott had badgered Hart and his household with all manner of unreasonable non-stop demands.  He unfairly accused Hart’s servants of stealing; he whined for cookies and milkshakes at odd hours; he demanded the heat be turned off; he insisted that Hart trade beds with him — it was always something!  As Hart described the maddening no-sleep-over to Kaufman, he had a brainwave:  “Wouldn't it have been awful if (Woollcott) had broken a leg and been on my hands for the rest of the summer?”  Ta-da!  A classic comedy was born!  Talk about turning lemons into lemonade!

George S. Kaufman and Moss Hart’s comedy The Man Who Came to Dinner (TMWCtD) debuted at New York City’s Music Box Theatre on October 16th, 1939.  It made Monty Woolley a Broadway star, and in January 1942, he became a movie star, too, when the Warner Bros. film version hit theaters.  The film version pretty much became an instant classic.  Even today, TMWCtD is a gift that’s kept on giving to delighted audiences over the decades, with awards and revivals in New York and London.  There was even a 1950 Radio broadcast starring Clifton Webb as Sheridan Whiteside, and Lucille Ball as Maggie Cutler.  Knowing that Webb and Ball were equally talented in both comedy and drama, I for one can cheerfully imagine going back in time to hear Webb and Ball do comedy together after their awesome dramatic performances in The Dark Corner!   I wonder how TMWCtD‘s Sherry (as friends call him) and Laura’s Waldo Lydecker would have gotten along, murder not withstanding?

Born in August 1888, Monty Woolley came from an elite family, owners of the renowned Marie Antoinette Hotel on Broadway.  Despite his youth, Woolley cut quite a swath through Manhattan society, along with Master’s degrees at Yale and Harvard.  He returned to Yale as an English instructor and drama coach, counting Thornton Wilder and Stephen Vincent Benet among his students, intimates, and confidants.  Woolley’s friend Cole Porter (we should all have such friends!) encouraged him to become a stage director himself, resulting in such Broadway hits as Fifty Million Frenchmen (1929), The New Yorkers, and Jubilee (1935). Woolley took his first Broadway bow in the hit musical On Your Toes (a revival is set for 2013) and soon it was Hollywood’s turn to sit up and take notice as Woolley ascended the ranks of supporting actors at MGM, Warner Bros., and Paramount.

Woolley came into his own in the 1940s, with hits like the Christmas classic The Bishop’s Wife; When Irish Eyes are Smiling; the rather fanciful Cole Porter biopic Night and Day; and best of all, two Oscar nominations: a Best Actor Oscar nomination for his role in the WW II drama The Pied Piper (1942), and a Best Supporting Actor nomination for another war classic, Since You Went Away (1944).  But for the life of me, I can’t imagine why Woolley wasn’t nominated for an Oscar for his iconic performance for TMWCtD! Just one of cinema’s little mysteries, I guess!

Only two actors besides Monty Woolley reprised their original Broadway roles for the movie:
Then television came along, bringing a (reportedly so-so) 1972 TV movie starring Orson Welles, Lee Remick, and even Mary Wickes reprising her debut role.  In 2000, there was a delightful Broadway revival at The Roundabout Theatre, starring Team Bartilucci favorite Nathan Lane, also broadcast on PBS (which we watched and loved). There had even been a musical version in 1967, Sherry!, by none other than James Lipton!   Alas, it was short-lived, but the soundtrack is still available on Amazon.com as of this writing, with a powerhouse cast including Lane, Bernadette Peters, Tommy Tune, and Carol Burnett!

But of course, movies are the medium we’re most mad about here at TotED, so we’re focusing on the 1942 Warner Bros. version of TMWCtD, one of our favorite holiday comedies!  Naturally, Warner Bros. snapped up the movie rights, and the result has something for everyone:  comedy chock-full of witty dialogue by brothers Julius J. Epstein and Philip G. Epstein (the writers who brought us such hits as Casablanca and the film version of Arsenic and Old Lace), adapted from Kaufman and Hart’s play, of course, not to mention romance and rivalry; gorgeous gals; screwball comedy; even penguins and octopi!  How’s that for getting your movie-going money’s worth (so to speak, considering most of us here are most likely watching in on DVD/Blu-Ray and such)?

Granted, at that time, Monty Woolley wasn’t as familiar to moviegoers as he was to Broadway audiences, so Warner Bros. surrounded Woolley with a galaxy of stars, including:

The film opens on Sherry and his longtime secretary Maggie Cutler, arriving from New York City to do a favor for Sherry’s old friend Harry Clarke, who’s running a lecture tour.  Despite the friendship, Sherry’s raising the roof even before the train to Mesalia, Ohio has pulled into the station:

Sherry:  “I simply will not sit down at dinner with Midwestern barbarians.  I think too highly of my digestive system.”

Maggie:  “Harry Clarke is one of your oldest friends.”

Sherry:  “My stomach is an older one.”

The worldly, arrogant, tart-tongued Sheridan Whiteside — “Sherry” to his sophisticated friends — couldn’t be more different from the genteel — if impatient — bourgeois ball-bearing magnate Ernest Stanley and his wife, Daisy.  It’s clear that Sherry is a termagant under even the best of circumstances.  Then Sherry slips and racks himself on the Stanleys’ snowy, poorly-shoveled steps, and the Stanleys’ well-organized life turns upside-down, with wickedly funny results!  The shenanigans bring to mind a quote from a lecture by Stephen King during my college days at Fordham University:  “When bad things happen to others, it’s funny.  When it happens to you, it’s horror!”  Luckily for us viewers, the funny parts override everything else in this hilarious nightmare!

At least Sherry is a witty, entertaining, fun-to-watch tyrant, as long as you don’t cross him somehow.  He’s a great host — albeit at the bedeviled Stanleys’ expense — as he invites everyone and everything to his hosts’ home, from convicts to overseas visitors from many lands and languages, even different  species, including octopi and penguins.  Those poor Stanleys — their phone bills alone must be through the roof with the likes of Eleanor Roosevelt and Sherry’s other famous friends gabbing away!  Slipping on ice and landing painfully on his rump certainly may not always lift Sherry’s spirits, but it sure leaves us howling with laughter as pandemonium reigns in the Stanley home, with scads of famous friends calling and visiting while Sherry amuses himself with gossip and guile.

Call it Stockholm Syndrome, or call it just plain warming up to each other, but as Sherry’s convalescence progresses, he finds himself taking a liking to some members of the household, including the couple working for the Stanleys, John (Edward Starkey) and Sarah (Betty Roadman), which just goes to show that if you feed people well, they’ll be your friends for life!  Sherry also takes a shine to the Stanley family’s young adult kids, June (Elisabeth Fraser) and Richard (Russell Arms).  Mr. Stanley keeps the young folks on short leashes, and when they confide in Sherry about Richard’s aspirations to be a professional photographer and June’s love for a labor union agitator who Mr. Stanley disapproves of, Sherry does his bit to help them while at the same time ensuring apoplexy from the easily-shocked Ernest and Daisy.  That’s what I call a win-win situation!

Meanwhile, sophisticated Maggie finds herself drawn to the editor of the Mesalia Journal, Bert Jefferson (Richard Travis from The Big Shot; Mission to Moscow; and many TV Westerns — appropriate, since his real name was William Justice!).  Bert proves to be an easygoing, affable fella; indeed, he must be the most laid-back newspaperman in or out of movies!   Bert doesn’t even get rattled when Sherry tricks him out of a dollar to pay the cab driver — which Bert firmly but good-naturedly gets back from Bert.  Good for you, Bert!  No wonder Maggie’s falling for this sweet,  handsome, refreshingly uncomplicated man.  Bette Davis turns out to be a swell comedienne with her droll delivery, while subtly letting her both her hair and her guard down to let Bert win her heart.Will there be a Christmas wedding with everyone living happily ever after?  Not so fast!  When Sherry realizes love is blossoming between Maggie and Bert, Sherry doesn’t like it a bit!  Beneath Sherry’s acid tongue, he’s genuinely fond of Maggie, but he’s even more fond of having everything his own way, with no disruptions of his precious routine!  So the rascally Sherry launches his secret weapon:  glamorous actress Lorraine Sheldon, who’s been looking for a new play to star in, and is always open for mixing business with pleasure.  Without spoiling the screwball surprises, I can only say that love just might conquer all with a little help from your zaniest, most talented friends!  That said, I must say Maggie needs more faith in Bert.  Newspaperman or not, I don’t think it’s occurred to Bert that Lorraine’s hot for him.  Maybe he’s too uncomplicated?

Considering how many stars vied for roles in TMWCtD, there could have been several versions filmed to keep everyone in Hollywood busy!  According to the TCM Web site, the following actors all wanted to be considered for roles:

At one time, Howard Hawks was interested in directing The Man Who Came to Dinner.

A dog bite to the nose temporarily  kept Bette Davis from being able to film scenes.

The character of Lorraine was reportedly based on actress Gertrude Lawrence.

Mary Astor was tested for the role of Lorraine. (She'd have been a great choice, too!)

Danny Kaye tested for the role of Banjo. (0h, I can just imagine the awesomeness!)


Harpo Marx played the role of Banjo himself in a 1941 stage production at the Bucks County Playhouse in Pennsylvania.

The character of Beverly Carlton was based on Noel Coward.

The play The Man Who Came to Dinner was considered to be the last great collaboration between the team of George S. Kaufman and Moss Hart.

According to the IMDb, co-star Richard Travis came back to the town of Paragould, Arkansas to host the World Premiere of The Man Who Came to Dinner at the Capitol Theatre.  Travis had previously lived and worked there as the editor of the theater's coming-attractions magazine!  What’s more, Travis’ real name was William Justice, which no doubt explains why he went on to many Western roles.

All of us here at Team Bartilucci HQ wish you and yours a truly joyful and safe:
Merry Christmas!
Happy Hanukkah!
Happy Kwanzaa!
And/or anything else
you and yours wish to celebrate! 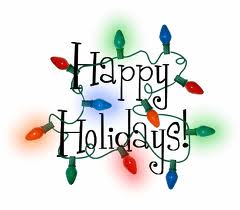