Encore Presentation of THE DARK CORNER for Lucille Ball's Centennial: You Picked A Fine Time to Meet Me, Lucille 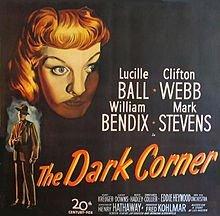 This post is being republished as part of the Loving Lucy Blogathon hosted by True Classics in honor of Lucille Ball's Centennial today, Saturday, August 6th, 2011.

Watch your step—you might trip over a spoiler or two!

At times, 20th Century-Fox’s 1946 thriller The Dark Corner (TDC) plays like a greatest-hits collection of classic 1940s suspense films, but to me, that’s part of its charm. The talents involved include: co-star Clifton Webb, again playing a witty, urbane, snobbish Manhattanite fascinated by a beautiful brunette and her portrait like Laura; The Glass Key’s co-star William Bendix, who’s always fun to watch whether he’s playing a lovable mug or, in this case, a hissable thug; and Laura’s co-screenwriter Jay Dratler, along with Bernard C. Schoenfeld and Leo Rosten of The Joy of Yiddish fame! Indeed, the versatile Rosten wrote TDC’s original 1945 Good Housekeeping serial under the nom de plume Leonard Q. Ross. Ever prolific, Rosten also wrote many other stories, novels, and movie scripts, including two of my favorites, All Through the Night (1941) and Mystery Street (1950). Even the film’s Gershwin-esque opening theme music, a piece by Alfred Newman titled "Manhattan Street Scene," had been used before, in Fox’s first neo-noir thriller I Wake up Screaming (1941). (Fun Fact: Newman's Oscar-winning family of composers includes nephew Randy Newman, another of our household faves!) 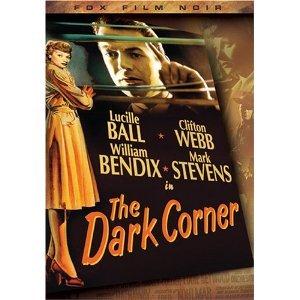 TDC’s engaging cast, sharp dialogue, and compelling plot elements work wonderfully under Henry Hathaway’s direction.Critics and audiences agreed that Lucille Ball shines in this early dramatic role of hers, long before I Love Lucy made her a comedy icon. According to both the TCM Web site and the entertaining DVD commentary by film historians Alain Silver and James Ursini, Hathaway was such a tough taskmaster that Ball had a nervous breakdown during the filming. It doesn’t show onscreen in her assured, appealing portrayal of smart, loyal secretary Kathleen Stewart, originally Kathleen Conley in the Good Housekeeping serial (in fact, the DVD’s package copy mistakenly identifies Kathleen’s last name in the film as Conley, not Stewart). Kathleen's falling in love with her P.I. boss, Bradford Galt (no relation to John Galt), and the feeling is mutual.

As Brad, Mark Stevens makes a fine Dick Powell-like transition from musicals to tough-guy parts. Brad’s starting out fresh in New York City after being framed for manslaughter and nearly killed in California by his corrupt ex-partner, lawyer Tony Jardine. As a favor to his Cali colleagues, local cop Lt. Reeves is keeping tabs on Galt to make sure the “impulsive youth” stays out of trouble. In the role of Reeves, fans of the March of Time newsreels will recognize Reed Hadley’s commanding speaking voice; he’s got great screen presence and a formidable air of authority. Nevertheless, it seems Brad’s past is coming back to haunt him. When Brad catches a big lug (Bendix) on his tail wearing a white suit (who does he think he is, Roy Scheider in Last Embrace?), he’s shocked when the guy claims Tony Jardine hired him. The plot thickens as vulnerable but determined Brad sets out to see if Tony’s aiming to finish what he started out west.

Meanwhile, on the swankier side of the city, art dealer/collector Hardy Cathcart (Clifton Webb) drums up business for his posh art gallery and celebrates his third wedding anniversary at an elegant party for about a hundred of his closest friends and loved ones, including his beautiful young wife, Mari (Cathy Downs, who played the title role in My Darling Clementine and became the future wife of The Amazing Colossal Man). Hardy jokes that as a couple, Mari and Hardy are “the perfect picture of Beauty and the Beast,” though Mari charmingly disagrees. A close friend of the Cathcarts joins the celebration—none other than Tony Jardine himself (Kurt Kreuger, who excelled at playing smooth-talking Nazis and other shady Continental types), who’s apparently moved his law practice to The Big Apple! But Tony himself is still a bad apple, seducing and blackmailing vulnerable women of means.

We also find that Hardy’s burning love for Mari is like his passion for his paintings; he sees her and everything in his lavish home as treasured possessions. “I never want you to grow up,” Hardy coos to Mari as they waltz at the party. “You should remain ageless, like a Madonna, who lives and breathes and smiles, and belongs to me.” How’s that for an unsettling bit of sweet talk? Later, Hardy proudly unveils his newest acquisition, a painting he’s been obsessed with for years: a 19th-century portrait of a woman who bears a striking resemblance to Mari. It’s no coincidence: Hardy admits that when he met Mari after coveting the portrait for so long, “I felt as if I had always known her—and wanted her.” Although Hardy keeps Mari in the lap of luxury, the novelty of this marriage-cum-ownership is wearing off for his restless young wife. She and Hardy even have separate bedrooms (what did she expect with Clifton Webb and the Production Code?). No wonder Mari has the hots for Tony, unaware he’s a blackmailing gigolo. The script and Downs’s portrayal show Mari in a sympathetic light throughout TDC.  At a rendezvous with Tony at his luxe bachelor pad, Mari tells him, “Tony, I tried. I made a bad bargain, and I tried to stick it out with him, but I just keep sitting, listening to his paintings crack with age.” With the conflicting emotions flitting across Tony’s face as Mari gets more insistent that they run away together, we viewers can almost hear him thinking, “What about my career? How will I keep my seduction-and-extortion racket going after she dumps her rich husband to marry me?”  But that’s the least of their problems when these worlds of high society and low crime finally collide, as Hardy uses trickery and White Suit’s strong-arm tactics to fit Brad for a frame and Tony for a pine box.

To complicate matters further, Brad can be his own worst enemy at times, especially since Tony’s near-fatal double-cross shook Brad’s confidence in himself, leaving him prone to drinking and despair. Good thing Kathleen always thinks on her feet when trouble rears its nasty head. She has a knack for dragging Brad out of his periodic pity parties and helping him focus on clearing himself while also rebuilding his shattered confidence. If you ask me, Kathleen is underpaid! The chemistry between Ball and Stevens deliciously blends banter, tenderness, and sexual smolder. Though Kathleen deftly keeps Brad from going all the way because she “plays for keeps,” the lovebirds still get into some pretty hot kissing, especially in a great scene showing the couple reflected in a mirror as they embrace.

﻿
﻿
I like the whole “haves” vs. “have-nots” element running through TDC, with little details like the running gag about Brad scoring nylon stockings for Kathleen, and the crucial clue Brad gets from the slide-whistle-playing urchin (the uncredited Colleen Alpaugh) in White Suit’s building. Keep an eye out for two other uncredited but memorable character actors: Minerva Urecal, best known to Team Bartilucci as Mother in the 1960 season of TV's Peter Gunn and the harridan who gets briefly turned to stone in The Seven Faces of Dr. Lao (1964), playing one of Brad’s clients; and Douglas Spencer of The Thing from Another World as one of several deli customers gawking as Brad almost becomes a hit-and-run victim. In one scene between Hardy and White Suit, there’s this highbrow-to-lowbrow translation that always cracks me up as Hardy instructs White Suit to phone Brad and trick him into a deadly rendezvous:

Getting back to clues, I love that something as prosaic as dry cleaning helps our heroes crack the case!  Another nice bit: Brad is dropping Kathleen off at the movies near his apartment, where he’s going to face off with White Suit. Worried, Kathleen pouts, “I never thought I’d have to beg you to take me up to your apartment.” Brad replies, with a grin, “You’ve been there...” The box office gal (Mary Field from Dark Passage and Ball of Fire, though she's an uncredited scene-stealer here) has the most priceless look on her face as she strains to hear the rest of the conversation!
TDC has plenty of superb writing and acting woven skillfully through the film noir tropes. I particularly liked this wonderful emotional scene between Hardy and Mari a little over an hour into the film, in which the couple talks around their marital situation in that “friend of a friend” way. Hardy reveals that Tony (who’s been murdered by now, unbeknownst to Mari, who’d planned to run off with Tony that very night), has been dallying with rich women, including Lucy Wilding (Molly Lamont from The Awful Truth and Scared to Death), who we (but not Mari) saw Tony blackmailing earlier. Mari doesn’t want to hear it:

Mari (near tears): “It’s not true! He’s always loathed her.”
Hardy: “He loathed her rather intimately, I’m afraid.”
Mari: “But he couldn’t! I mean, she’s too old for him.”

The distraught Mari rushes off to her bed, her figure shown off lusciously yet tastefully by the light shining through her filmy negligee (thanks to ace Director of Photography Joe MacDonald, amping up the moody film noir feel with his beautifully stark use of shadows and light) as she slips under the covers. Hardy’s expression is both cold and wounded. “Love is not the exclusive province of adolescents, my dear,” he says quietly. “It’s a heart ailment that strikes all age groups, like my love for you. My love for you is the only malady I’ve contracted since the usual childhood diseases—and it’s incurable.”

There’s a bracing street feeling to TDC’s periodic outbursts of brutal-for-the-era violence. None of this Marquis of Queensbury rules stuff—the combatants really clobber each other! Even Hardy commits a murder so sudden and shocking that I gasped in spite of myself. White Suit’s ambush in Brad’s apartment even has a touch of (unintentional?) humor; watch William Bendix’s head, and you'll see his toupee come loose, hanging onto his scalp by a thread!

The film was shot in both NYC and L.A., but it all looks convincingly like Manhattan. The NYC second-unit work is especially good, including shots of the Third Avenue El and an exciting car chase. In addition to the nifty commentary track, the DVD’s extras include swell vintage trailers for TDC and other Fox crime flicks. If you love films noir but don't have time to sit down and give all your favorites your undivided attention, watching TDC is the next best thing!