Dark Passage: The Softer Side of Bogart and Bacall 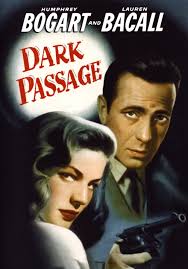 Husband-and-wife stars Humphrey Bogart and Lauren Bacall teamed up again for the 1947 film noir Dark Passage (DP, not to be confused with our favorite noir magazine, The Dark Pages).  I could have sworn that Philadelphia-born author David Goodis had originally titled this novel The Dark Road after Warner Bros. snapped up the movie rights for Bogie and Baby, giving it the more suspenseful title Dark Passage; does anyone here know for sure?  On a recent TCM Friday Night Spotlight on noir authors, film historian Eddie Muller explained that many of these suspense writers had to suffer the slings and arrows of seeing their books “chopped up and channeled as B-movies before they ever got A-list recognition, but Goodis did it backwards with DP, his first crime novel.  It was serialized in The Saturday Evening Post, and then Warner Bros. snapped it up for Bogart and Bacall for the silver screen."  Nice work if you can get it!  Goodis was touted as the new Dashiell Hammett, writing pulps and radio serials in the 1940s.

Goodis was apparently one of those maverick types who had his own ideas about what he wanted to write and how to go about it—imagine that, writers with minds of their own!  Back in the day, filmmakers didn’t always know what to make of quirky types like Goodis, but he was nevertheless prolific with novels such as The Blonde on the Street Corner and Street of No Return (both from 1954); The Moon in the Gutter and The Burglar (both from 1953), and Cassidy’s Girl (1951).  Goodis eventually returned to Philly to take care of his ailing brother, spending the 1950s writing paperback originals with moody, broody plots focusing on troubled protagonists who couldn’t win for losing.  Somehow, I get the feeling Goodis wasn’t exactly the kind of guy who faced each day with a smile on his face and a jaunty tune on his lips—but whether or not that was true, Goodis sure could write.  In fact, nowadays, a first edition of the 1946 hardcover of Dark Passage is now valued at more than $800!

The DVD’s absorbing documentary featurette suggests that Bogart and Bacall’s participation in the star-studded Committee for the First Amendment, which was intended to defend colleagues called before HUAC, might have been among the reasons that DP wasn’t as big a hit as the real/reel-life couple’s earlier screen collaborations.  However, I suspect that audiences past and present may have found DP harder to cozy up to because instead of the cool, wisecracking, insolent-yet-playful Bogart and Bacall of To Have and Have Not and The Big Sleep, this film version of Goodis’ novel presents a more melancholy, vulnerable Bogart and Bacall—which, in my opinion, is not at all a bad thing, just unexpected from this star team at that time!  That Bogart & Bacall chemistry is still there, but it’s sweeter, as if they’d decided to let their collective guard down and allow tenderness to take over.  Instead of the cocksure Bogart character we all know and love, DP protagonist Vincent Parry is wary, fearful, fumbling in his attempts to clear himself of his wife’s murder, escaping the cops like he escapes from prison in the film’s opening scenes.  Vincent has few allies, but the ones he has are at least willing to help.   There’s Irene Jansen (Bacall), whose father had died in prison after being framed for murder.  Irene has been following Vincent’s case during his trial, and she ends up in a position to help hide him while he does his best to prove his innocence.

Then there’s Sam, the cab driver (Tom D’Andrea from Pride of the Marines; Night and Day; Humoresque).  Sam is cynical, yet he’s basically a kind, lonely soul, as are many characters in DP.   Sam suggests that Vincent should go to back-alley plastic surgeon Dr. Walter Coley (Houseley Stevenson from Sorrowful Jones; Crime Doctor; Native Land).  Dr. Coley may have been kicked out of his practice for being ahead of his time, but like others in DP, he too got a bum rap and is also a decent guy.  The proof is in the pudding: Vincent’s operation went so well that he now looks like Humphrey Bogart!  Isn’t 1940s medicine wonderful?  Wasn’t Vincent lucky to get comrades like Irene and Sam and Dr. Coley?  If only they didn’t have to keep their secrets so close to the vest, they could put together a support group; how about Wrongly Accused Protagonists Anonymous?

1947 seemed to be The Year of the Subjective Camera, between DP’s first hour shot from Bogart’s viewpoint, and Robert Montgomery doing the same in Lady in the Lake, using the technique throughout the film.  Unlike Lady…, DP’s  plastic surgery gimmick provides a good plot reason for the audience not to initially see Bogart’s face, though we frequently hear that unmistakable Bogart voice to make up for it.  It may take a while before they actually get Bogart out of his bandages as Vincent Parry, but on the positive side, we also get to see more of the lovely Lauren Bacall as Irene, as well as all those great spellbinding Warner Bros. character actors in lieu of Bogie.  The tenderness between Irene and Vincent is palpable.  There isn’t an uninteresting face or a bad performance in the bunch, with standout performances from Bogart and Bacall and a superb array of character actors.  In addition to D’Andrea and Stevenson, there’s Rory Mallinson (Cry Wolf; Nora Prentiss; Possessed) as Parry’s musician friend; and the ever-dependable Bruce Bennett (The Treasure of the Sierra Madre; Mildred Pierce; Mystery Street).


The man I love to hate most in DP is cheap hood Clifton Young, a former Our Gang star (oh, the irony!).  As the villainous Baker, the adult Young grew up to have an oily grin and a cleft chin that looks like it got lost on the way to Cary Grant’s face by mistake; you might also see Young on TCM, where he was a hoot in the hilarious “So You Want To…” shorts.


And the woman I love to hate in DP?  None other than the wonderful Agnes Moorehead, with a resume ranging from The Mercury Theatre with Orson Welles, to stage and screen, including four Oscar nominations (Hush…Hush, Sweet Charlotte; Johnny Belinda; Mrs. Parkington; The Magnificent Ambersons); and scene-stealer Endora on TV’s Bewitched!  Moorehead steals the film as Madge Rapf, the kind of woman who won’t join any club that would have her as a member.  Madge is some piece of work: she’s a stylish dame who goes out of her way to spread stress and misery wherever she goes.  Sticking her nose into everyone’s business, Madge manages to lure people to her and push them away at the same time, and if she can’t have you, she’ll make damn sure nobody else can have you, even if that means murder!  With her delivery dripping honey one minute and venom the next (especially in her climactic scene with Bogart), the commanding presence of the quicksilver Moorehead and her unconventional yet undeniably striking good looks ensure that you can’t take your eyes off her whenever she’s onscreen.

If you’re looking for a tight mystery plot, this ain’t the place!  While DP has many suspenseful moments, it’s primarily a character study and a mood piece about loneliness, redemption, and starting over, with a strong undercurrent of postwar paranoia, all underscored beautifully by Franz Waxman’s stirring music (with contributions by an uncredited Max Steiner.  I love the use of “Too Marvelous for Words” as Vincent and Irene’s song).  The bus station scene is a touching example of this.  Incidentally, that lady at the bus depot, Aunt Mary, is Mary Field from Ball of Fire (as Miss Totten); The Dark Corner (as the eavesdropping movie ticket-taker); Wonder Man (as the stenographer); and Ministry of Fear (as avant-garde artist Martha Penteel)!  Mary’s so versatile, bless her!

But the reactions of people who meet protagonist Vincent with with his post-op face and new name, “Allan Linnell,” are so suspicious I wondered if writer/director Delmer Daves (who cameos as the photo of Irene’s doomed dad.  His real-life kids have bit parts, too) was indicating that Parry was really projecting his own paranoia onto the people around him.  His new name in particular makes people look at him like he just dropped in from the planet Neptune:  “Linnell?  That’s a very unusual name.”  What’s so freakin’ unusual about it?!  What, it’s not blandly Anglo-Saxon enough?  I wonder if singer/songwriter John Linnell from They Might Be Giants (one of Team B’s favorite bands) ever had to field such absurd questions?   But I digress…

Even when DP drops the subjective camera style so we can see Bogart in all his glory, the visuals are striking thanks to Sid Hickox’s moody black-and-white photography.  That said, I recently saw a colorized still of Moorehead as Madge, and I must admit it looked pretty darn impressive!  With the emphasis on Madge’s love of all things orange, I can imagine a partly-colorized version a la Sin City, with everything black-and-white except Madge’s orange clothes and belongings! The Lodger, perhaps?  Speaking of Hitchcock, DP and Hitch’s 1958 classic Vertigo might make an interesting double feature since they share themes of loss, loneliness, new identities and fresh starts as well as a San Francisco setting.  (That could also work for another San Francisco film I like, Impact, but that’s a blog post for another time!) If you want to see a softer side of Bogart and Bacall, DP is well worth watching.  You may also enjoy the DVD’s fun and interesting extras, like the original theatrical trailer (for me, the hyperbole of movie trailers of that era is part of their charm) and “Slick Hare,” one of the Bugs Bunny cartoons that affectionately lampoon Bogart; it’s been claimed that Bogart liked to pal around with the animators at Warner Bros.’ “Termite Terrace” and he actually did his own voice work for Slick Hare and 8-Ball Bunny!
Nevertheless, Director of Photography Sid Hickox had plenty of  innovative visual techniques in glorious black-and-white.  I particularly liked the use of the glass floor when Vincent discovers a dead body (I won’t say who); a tip of the hat to Alfred Hitchcock’s


According to Wikipedia, the TV series The Fugitive became a hit in 1963—and Goodis took the producers to court, considering the show had many elements in common with Dark Passage.  In 1963, ABC television began airing the television show The Fugitive, the story of Richard Kimble, a doctor wrongfully convicted of murdering his wife. Kimble subsequently escapes and begins a long search for the "one-armed man", the person he believes to be the real killer.  For that matter, the whole case was originally inspired by real-life Dr. Sam Sheppard, who’d been accused of murdering his pregnant wife.  It just goes to show that there’s nothing new under the sun, in fiction or real life!