High Anxiety, You Win…Me Over! My Multimedia Review 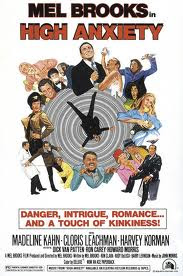 For those of you who’ve asked about my DorianTB avatar photo since this mug of mine began turning up on Facebook and in this blog, the answer is directly related to this week’s blog post about Mel Brooks’ smart, affectionate, deliriously funny 1977 Alfred Hitchcock spoof High Anxiety! You see, during my senior year at Fordham University in 1985, our beloved Theater professor Sister Francesca Thompson, the coolest and most sophisticated nun ever, assigned our class to lip-synch to a recording of our choice; the more inventive the performance, the better. I decided to salute two of my favorites with one stone, so to speak.
I wore a black fedora from my dear mom's vast hat wardrobe, a black tuxedo-style blazer, and black slacks—that is, until I innocently strode up to my pal and classmate Kypro (“Kyp” for short), nonchalantly removed my slacks, and asked him to keep an eye on them during my number. Considering that Kyp looked rather like a young 1980s version of Victor Mature, the look on his face was especially priceless, bless him! I went up to the front of the classroom, looking as much like Judy Garland in Summer Stock as I could. (Luckily, I had a cute figure then, if I do say so myself!) I opened my mouth to lip-synch—and out came the boisterous voice of Mel Brooks singing “High Anxiety” from the soundtrack album! If I do say so myself, I brought down the house, getting an A+, and it was a heck of a lot of fun, as well as a confidence boost for a shy kid like me (don’t let my gregarious writing style fool you!).
High Anxiety (HA — even the initials are funny!) is great fun even if you're not already an Alfred Hitchcock fan — but if you are, you'll love it all the more as you nail specific spoofs of and references to Hitchcock’s classic suspense films. The key is that Brooks’ best movie genre parodies would still be solid genre films if you took out all the jokes and sight gags. That’s why his biggest hits are so good and have been so dearly loved, such as 1974’s Blazing Saddles and Young Frankenstein. HA is a comedy piñata stuffed with outrageous yet affectionate spoofs of Hitchcock’s best films—a far cry from many other genre parodies who try to do what Brooks and his writers do when they’re at their best, except that all too many of the wannabes’ attempts come off as puerile and mean-spirited.

I should explain to those who might be new to Mel Brooks’ work (so many young movie fans to inspire!) that aside from Brooks’ solo screenplays for his 1968 Oscar-winner The Producers, and 1970’s The Twelve Chairs, his best scripts have often been collaborations between himself and other writers, as they did with Your Show of Shows. Of course, there’s wit in Hitchcock’s thrillers, too. The difference is that Hitchcock’s humor was sleek and sly, while Brooks and his co-writers Ron Clark, Rudy DeLuca, and future Oscar-winner Barry Levinson are boisterously cheeky; as Brooks himself might say, “they kid because they love.”
The plot plays delightfully like Hitchcock’s Greatest Hits, or as our friend and fellow blogger Nathanael Hood of Forgotten Classics of Yesteryear said in his own superb in-depth High Anxiety blog post from 2009: “The Master of Comedy takes on The Master of Suspense!...I find that this film is more than just a collection of satirical set pieces. It shows an endearing love of Hitchcock. Not only are his movies parodied; Hitchcock’s camera movements are mimicked, his musical scores quoted, and even the actors’ performances are modeled after prominent characters from his movies. Many of the references are subtle. So subtle that they can be missed, or even outright ignored by audiences.” The story is a delightful blend of every Hitchcock trope as seen through a funhouse mirror. Our hero, Nobel Prize-winner Dr. Richard H. Thorndyke (Brooks), arrives as the new head man of the Psycho-Neurotic Institute for the Very, Very Nervous; it’s like Green Manors in Spellbound (1945). Of course, the P-NIftV,VN is goofier than Green Manors ever was, with patients like Charlie Callas as the man who thinks he’s a cocker spaniel, and who Richard is led to believe is Arthur Brisbane, Industrialist. (The real Brisbane is played by the dapper, gentlemanly F/X expert Albert Whitlock, who worked on several Hitchcock movies.)

Meanwhile, poor Richard is fighting a vertigo-like malady, the titular High Anxiety. “If left unchecked, it can cost you your life!” declares his old friend and mentor Professor Lillolman (Howard Morris)—whereupon Lillolman and Richard are startled by an ominous musical sting, courtesy of the Los Angeles Symphony Orchestra’s touring bus! Soon Richard becomes the man who knew too much as he falls in love with Brisbane’s beautiful, soignee daughter Victoria (Madeline Kahn), or as Richard and others say, “You’re the cocker’s daughter?” Before you can say “Que sera sera,” Richard’s making like Frank Sinatra crooning the title song for Vicki in the hotel’s Art Deco-ish piano bar (for me, that’s HA’s highlight), and getting framed by evil P-NIftV,VN personnel Nurse Diesel (Cloris Leachman) and her love slave Dr. Montague (Harvey Korman) for a murder he didn’t commit, running hither and yon to clear himself through all kinds of picturesque locations while the Hitchcock gags (and even a few that aren’t Hitchcock-centric but are still funny anyway) fly thick and fast and fabulous—and so much more!

While I’ve always thought Brooks’ former co-star and co-writer Gene Wilder would've been perfect casting as acrophobic psychiatrist Dr. Richard H. Thorndyke (click here for the psychiatrist panel and the HA musical number to find out what “H” is short for), Brooks is nevertheless as irresistible as he is irrepressible, with Kahn a fine match for him as the flakiest mysterious blonde this side of Kim Novak. When you’ve seen as many Mel Brooks comedies as Vinnie and I have, you notice the genuine emotions behind the laughter. Sure enough, HA’s approach is as affectionate as it is hilarious. Not to overstate the case, but there’s palpable tenderness in the almost father-son relationship between Richard and Professor Lillolman, as well as the budding romance between Richard and Victoria. Ah, but there’s plenty of funny packed between the tender moments and Hitchcockian suspense! For example...

Now when I love a movie, I go out of my way to learn everything I can about it, including buying novelizations of that film if there is one. High Anxiety was no exception. The author of the High Anxiety paperback was Robert H. Pilpel, who wrote a great many articles for Harper’s Magazine, as well as a number of his own books, including the 1979 historical novel To the Honor of the Fleet; Between Eternities; Churchill in America, and a title that particularly intrigued me, Understanding your Therapist, or Why is This Taking So Long? I wouldn’t be surprised to find out that last title got Pilpel the High Anxiety novelization gig! Pilpel has a real gift for humorous writing with a sting in the tail, blending comedy, suspense, and romance nicely. For example, here’s our height-hating hero’s first-person account of his feelings as his airline prepares to land:


Omigod, we’re losing altitude! No, the ground is gaining altitude! “Ladies and gentlemen, the Captain has turned on the No Smoking sign. Please extinguish all smoking materials. Make sure your seat belts are fastened and your seats in the full upright position for our arrival in Los Angeles.” Omigod! Too fast, too fast! We’re dropping like a stone….Oh, Lord, why does the landing gear coming down always sound like the landing gear breaking off?

And here’s Richard insisting on meeting Arthur Brisbane, and Montague reluctantly phoning Nurse Diesel to set up a meet-and-greet:

He hung up with a little flourish of his wrist, as if Pig Latin were the most natural language for a licensed psychiatrist to use in speaking with a psychiatric nurse.

Richard sees the ultra-modern (for the late 1970s) Hyatt Regency Hotel for the first time:


Convention headquarters in San Francisco was a large modernistic hotel almost twenty stories high, built around a central glass-roofed courtyard. By some fiendish miracle of advanced architecture, the hotel was constructed so that each floor facing the courtyard juts out into thin air a little farther than the floor just below it. As you stand in the lobby, therefore, you are treated to the impression that the whole building is about to cave in on you. If you leave the lobby and venture upward, on the other hand, you are treated to the impression that gravity will soon bring you and the whole impudent pile of overhangs crashing ignominiously to the ground. The net impression you are treated to is that you should get the hell out of there before the building makes you dead, and that impression becomes a certainty when you see the fishbowl elevators whizzing up and down at the junctions of the walls like to many glass-enclosed coffins. It was doing my High Anxiety no good.

A beautiful stranger (who turns out to be Vicki Brisbane) bursts into Richard’s hotel room:

It occurred to me that I was dealing with a beautiful victim of paranoia—a beautiful armed victim—so I went to do as she’d asked.

“Get down!” she said vehemently. “They’ll see you.”

Paranoid. Definitely. I crouched down and closed the drapes.

“Close the other one,” she commanded.

Paranoid and pushy. I obediently started across the room.

“Keep down,” she ordered.

She was so obviously scared and so much more obviously pretty that I really didn’t mind being bossed around by her. Her gun impressed me, too…Suddenly there was the sound of the doorknob turning…. “Quick,” she said. “Make believe you know me.” And with that, she pulled me to her and kissed me as no paranoid had ever kissed me before.

Braces starts strangling Richard in the phone booth as he calls Vicki:


Vicki jumped to the wrong conclusion. “Listen, fella. I don’t go for this kind of thing.”

I managed to get one hand between my throat and the wire, but almost immediately the strangling pressure of the cord trapped it, and I could feel my wrist bone being forced into my Adam’s apple. I gasped and huffed like a man with terminal asthma, which in a way was what I was.

“Who is this?” Victoria asked. “Listen, you’re crazy if you think I’m going to stay on this phone and listen to heavy breathing.”

It wasn’t working. I was making a lot of noise, but no air was coming in. Red spots started dancing in front of my eyes.

“Listen,” Victoria went on, “maybe other girls get turned on with these kinky phone calls, but I couldn’t care less. How did you get my unlisted phone number? Did someone I know give it to you?...Listen, mister, I’m not going to listen to any more of this. I’ve had just about enough!...What are you wearing?”

It was horrible. I was being strangled to death while listening to the girl I loved mistake me for a pervert. It made me wild with terror and despair. It made me want to wail and sob. The only sound I could squeeze out, however, was a squeaky “Jeeeeee…Jeeeeee….” 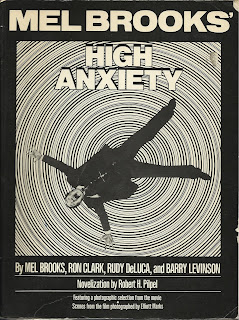 So if you loved the movie, read the book! I’ve seen it available online.

And if you haven't yet read all of Nate Hood's excellent High Anxiety blog post, here's a link: