Happy Third Anniversary to TALES OF THE EASILY DISTRACTED! 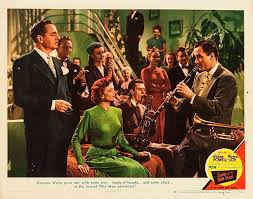 Fred, Wilma, and Pebbles are still fine-tuning the wheel, so we're celebrating with the ever-soignee, sweet, and snappy Nick and Nora Charles!  And what a year this alone has been! Here's the highlights so far:


* I've been elected as Chairwoman of the Board of the CMBA with my fearless co-leaders Page, Marsha, Lara, Patty (I haven't forgotten anyone, have I?  There's a reason my blog is titled Tales of the Easily Distracted, so please forgive me if I've unwittingly left anyone out!)

* My pal and fellow Blogger R.A. Kerr (Ruth to her pals) of Silver Screenings teamed up with me for the Mary Astor Blogathon from May 3rd through May 10th, to resounding success!

* I also contributed a blog post for another of our pals and fellow Bloggers, Jo Gabriel of The Last Drive-In and Goregirl's Dungeon for the William Castle Blogathon.  My post was the hilarious horror-comedy The Spirit is Willing.

Thanks a million  for being wonderful friends, readers, bloggers, and awesome people overall, everyone!