Dangerously They Live - Garfield and Fiends 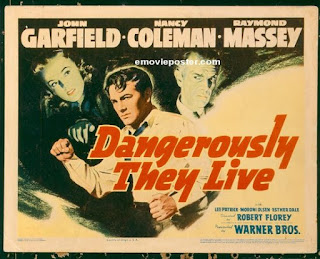 This post is part of the John Garfield Blogathon, hosted by Patti of They Don’t Make ’Em Like They Used To, running from March 1st through March 4th, 2013. Enjoy!

In 1941, John Garfield’s often-turbulent life was in transition—and this was before World War 2 sent the whole world reeling!  Having achieved stage stardom in New York City’s Group Theatre with his performance in Awake and Sing, then moving on to bigger Broadway success as the title character in Clifford Odets’ Golden Boy, and then becoming a movie star with the Lane Sisters in Four Daughters in 1938, Garfield was on a roll—until William Holden got the the Golden Boy role in the 1939 movie version that our man Garfield had created on the Great White Way!  Warner Bros. stepped in with the sweet consolation prize of a long-term contract.  But according to Richard Harland Smith at TCM's Web site, Garfield wasn’t really feeling it with his next projects, such as The Sea Wolf, in which Garfield was billed below co-stars Edward G. Robinson and Ida Lupino.  So Garfield kicked his agents at Lyon & Lyon to the curb, joining forces with super-agent Lew Wassermann and business manager Bob Roberts to help Garfield set up his own production company.

Smith makes an excellent case that Garfield was eventually drawn to Dangerously They Live (DTL) (1941) because the script by writer/producer Marion Parsonnet (Gilda; My Forbidden Past; I’ll Be Seeing You) surely would have appealed to him because he was a member of the Hollywood Anti-Nazi League long before America entered World War 2 in December, 1941.  No doubt Garfield enthusiastically approved of the film’s uncompromising depiction of German agents wreaking havoc in the free world; I sure would!

Directed by Robert Florey (from Murders in the Rue Morgue; The Cocoanuts; Meet Boston Blackie; TV’s Alfred Hitchcock Presents, The Dick Powell Theatre), we meet our heroine, Jane Graystone (Nancy Coleman in her film debut; she also co-starred in Kings Row; Mourning Becomes Electra; The Gay Sisters; and TV’s Ryan’s Hope), a lovely lass with a slight British lilt in her voice.  Jane seems to be checking out the sights and sounds of The Big Apple as she checks in with another British gent. What’s with all the U.K. visitors? Is there a Doctor Who Con in town?  But judging from the men giving Jane the hairy eyeball as she innocently grabs a cab, our heroine will be forced to confront the aforementioned Big Apple's worms lurking in our otherwise fair city!

Before you can say, “Where’s Traveler’s Aid?,” a henchman identified as John (John Ridgely of The Big Sleep; The Man Who Came to Dinner; Air Force) hangs around the the British Export Bureau.  Somehow I don’t think John's there to buy Travelers Cheques. Sure enough, Jane’s cab driver deliberately smashes the car into a wall, with a little help from from the fiendish cabbie.  Pandemonium reigns, and Jane is brought to the hospital as evil John and his cabbie cohort beat a hasty retreat!

Jane: “I’ve got all my arms and legs and everything?”
Mike: “Yes, and believe me, they’re worth keeping.”
As Mike admits Jane to the hospital, our anxious damsel-in-distress can’t remember a thing about herself.  Mike’s examination of his pretty new patient indicates temporary amnesia all right, giving Mike a perfect opportunity to fully examine a temporary amnesia patient, something he’s apparently been wanting to do for ages. How’s that for on-the-job training?

Before long, Mike gets a visit from Jane’s dad, John Goodwin (Moroni Olsen of The Glass Key; Pride of the Marines, also starring Garfield; and Alfred Hitchcock’s Notorious) turns up to aid his darling daughter.  Looks like a real fatherly, pillar-of-the-community type…but Jane doesn’t recognize him, either, and she swears the photos he brought to help kick-start her memory aren’t doing the trick, either.  It’s gradually dawning on our stalwart sawbones that Jane’s scared, and not just because of this alleged amnesia!  She finally gets alone with Mike — no, not because of his bedside manner or his attractive tush:

Jane: “You’re a good doctor, but you weren’t there when I was born, and I was.  That’s not my father.”

Mike (humoring her): “Now take it easy.  Everything will be all right.”

Jane:  “Yes, if you’ll stop humoring me and listen!  I work for British Intelligence, and that man is not my father.  He and his gang are trying to find out what I know.  Would you do me a favor?  Keep your eyes and ears open, and please never be far away from me?”

Mike does so, and during Jane’s hospital stay, she and Mike get to know and become increasingly fond of each other during their otherwise increasingly sinister predicament. But now Jane must keep the amnesia gambit going, or it’ll be curtains for both of them—and we don’t mean the drapes in the Psychotic Game Room! In the meantime, at least Mike and Jane can enjoy the lovely melody “You’re Not So Easy to Forget” in the background.  If fans of MGM’s Thin Man movies listen carefully, they’ll hear that song in the final Thin Man movie, Song of the Thin Man (1947).  It’s a nice touch, considering the film’s amnesia motif! 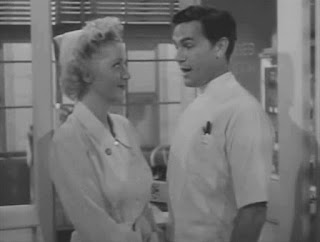 Mike:  “Not bad, Sherlock—but they may be in Chinese.”
Hmm, could it be mere coincidence that Jane’s laundry mysteriously goes AWOL soon afterward?  Are Head Nurse Johnson and/or the other busy little elves at the hospital just being unwittingly overzealous about putting away patients’ clothes, or is there something more sinister afoot?  If this story wasn’t set in 1941, I bet there would be lawsuits galore! 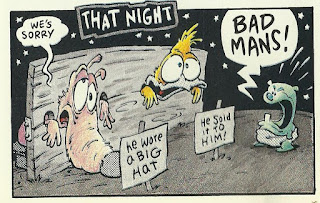 When it comes time for Jane to leave the hospital, it seems she and Mike just might catch a break:  Mike’s older colleague, Dr. Ingersoll (Raymond Massey from Abe Lincoln in Illinois; The Woman in the Window; Arsenic and Old Lace) agrees to let Mike come home with Jane to help her emotional healing—where we find out for sure that Dr. Ingersoll is, to borrow a line from cartoonist Mark Martin of CBG’s 20 Nude Girls 20, a “bad mans!”  Mike and Jane’s lives get more fearful and paranoid every day.  Seems Jane’s faux dad Mr. Goodwin and Dr. Ingersoll are really Nazi scum, and they’re tormenting the poor groundskeeper,  Mr. Steiner (Christian Rub from You Can’t Take It With You; he’s also the voice of Geppetto in Walt Disney’s Pinocchio), who’s under these creeps’ collective thumb.  With the villains packing heat and doing a fine job of keeping our heroes under control and away from anyone who could help them  (their most potent weapon seems to be the aforementioned Hairy Eyeball), the war of nerves alone makes escape harder than getting Alicia Huberman out of Alex Sebastian’s house in Alfred Hitchcock’s Notorious!  Where are Humphrey Bogart and his tough yet lovable Runyunesque pals from All Through the Night when you need them?!