This post is hosted by the Great Villain Blogathon, hosted by Ruth of Silver Screenings; Karen of Shadows and Satin; and Kristina of Speakeasy, from April 20th through April 26th, 2014.  It’s wicked fun! 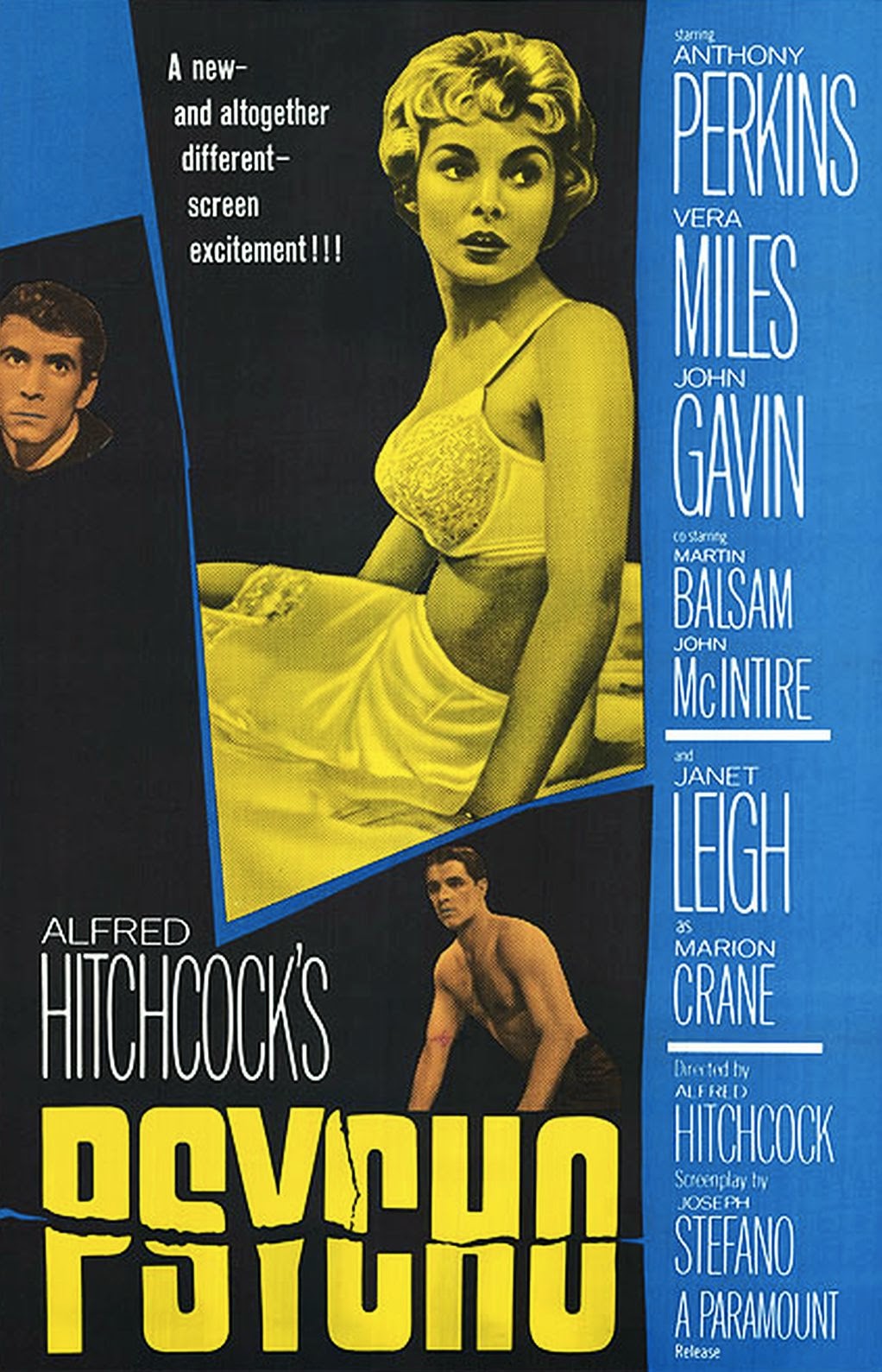 Poor frustrated Marion Crane (Janet Leigh of Touch of Evil; The Manchurian Candidate) is not a happy camper.  She doesn’t ask for much, just love and happiness with her hunky California sweetie Sam Loomis (John Gavin of Midnight Lace; Spartacus).

Much as they love each other, Marion and Sam are both frustrated because Sam’s still slaving away for his ex-wife’s alimony, as Sam says, “I’m tired of sweating for people who aren’t there.  I sweat to pay off my father’s debts, and he’s in his grave.  I sweat to pay my ex-wife alimony and she’s living on the other side of the world somewhere.”  Marion’s dullsville job in a Phoenix real estate company doesn’t inspire her much either, unless you count the hot sex in cheap hotels while she and Sam have steamy sex during their lunch hours.  (Somehow, that doesn’t sound that bad!)  Much as Marion loves Sam and vice-versa, she longs to have a bright future of her own with Sam, with money, romance, and happily-ever-afters, maybe even a big tuneful finale, like that other Marion:  Marian the Librarian from The Music Man! (Hey, if you’re gonna dream, dream big!)  “I’ll lick the stamps,” Marion vows to her sweetie.  Then fate steps in for Marion when Mr. Lowery, Marion’s boss (Vaughn Taylor of The Power; In Cold Blood) comes in with $40,000 from one of their customers, oil lease man Tom Cassidy (Frank Albertson from Fury; Wake Island).  But like Sam, Marion is also tired of toiling for people who aren’t there, so when Mr. Lowery asks Marion to bank Cassidy’s dough over the weekend, Marion loses her mind, er, I mean, makes a bold, sudden move, and scrams with the $40,000.  It’s all in the name of love, right?  Yeah, Marion, keep thinking that way while you make your getaway, getting more paranoid at every turn while cops give you the Hairy Eyeball, fumferring all the way!  Then again, hon, it’s not too late to come to your senses and lick those stamps with Sam…


At last, Marion finds shelter at The Bates Motel. It’s clearly had better days since the main road was washed up, but it you love stuffed birds, you’ll love it!  Just steer clear of that nice young man’s mother, Mrs. Bates.  Word has it that young Norman (played by Anthony Perkins from Friendly Persuasion; Murder on The Orient Express; Pretty Poison ) is rather henpecked.  But maybe we should give the old gal a little slack; after all, Mother isn’t quite herself these days, especially when pretty young strangers drop by….

Stephen Rebello’s Psycho commentary track mentions that some first-time viewers felt that Marion comes across as stupid!  However, I agree with Rebello that we must keep in mind that Marion is an amateur, not at all a practiced thief; indeed, she seems to be in some kind of fugue state, confused  and troubled.  As long as Marion has our sympathy, I say give the girl a break while they still can!  Psycho wasn’t named on AFI’s 100 Thrills List for nothing!
Bernard Herrmann’s compelling score (North by Northwest; the Oscar-winner The Devil and Daniel Webster, a.k.a. All That Money Can Buy; North By Northwest) grabs you from the driving theme to those shrieking violins!  Psycho was written for strings only.  Herrmann called it “his black-and-white music.”  Fun Fact: In Orson Welles’ 1958 thriller Touch of Evil, young Dennis Weaver (Duel; TV’s McCloud) played a nervous, twitchy motel manager!

Vinnie whips off his wig and discusses The Shower Scene

It's possibly the most iconic scene in film, certainly in horror/suspense.  It is perfection.  Two and a half minutes of masterfully crafted shock.  Rife with not even implied violence and nudity, but crafted so that you will infer violence and nudity.  The knife is never seen entering flesh, indeed there are only two moments where the knife is even seen near Marion.   And there's no blood - it's chocolate sauce, as everyone now knows - but it's only seen dripping into the bathwater and down the drain, but we imagine it all over poor Ms. Crane.  But it's shot so fast, and so well, that persistence of vision makes you see them together almost constantly.

The Shower Scene is SO iconic, it's been parodied
in the most amazing of places, from Mel Brooks'
High Anxiety to this episode of Tiny Toon Adventures.

Taken out of context and watched on its own, it's still compelling. So much so that film makers have tried to match it in endless kill scenes in Friday the 13th and endless other horror films.  But to truly understand the impact of the scene, you have to see it in the context of the film.

First off, the scene breaks one of Hitch's rules - if you TELL the audience what's coming, the dread and suspense they feel will make for a far longer and more harrowing experience.  But the scene comes straight outta nowhere; indeed, at this point in the film, you expect to see Marion get back in her car and go back to face the music and AAAAAAHHHHHH!!!!!

Take this one step further - as far as people knew, Janet Leigh was the star of the film.  For her to be removed from the board had never been done before. It left the movie-goers rudderless at sea - they had no idea what was going to happen, where the story was going to go.  It was that sense of being utterly out of their comfort zone that gave the moment its true shock. When Norman comes in and begins to clean up, the audience naturally assumes that he's the new hero of the film, exactly as they were supposed to.

And as if that's not good enough, they do the exact same shock turn again - just as you start to place emotion into Arbogast, even if you think he's the BAD guy in the movie, who's going to make life merry hell for Poor Norman and his wacky mother, in come the violins and the screaming.   There's only two on-screen kills in the film, and they both come out of left field of a stadium in another state.

The film is filled with left turns where you think yo know what it's about, and suddenly it isn't.  You assume Marion's the main character, wrong.  You assume the money is the McGuffin - wrong, it gets tossed into the trunk of the car and is never mentioned again.  You think Norman is the new hero, and...well...