The Picture of Dorian Tenore-Bartilucci, or: Foreword Into The Past (& Present) 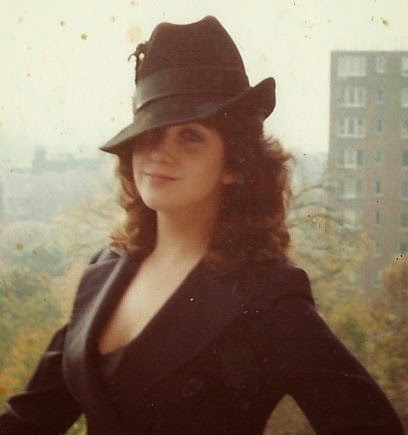 Hi, folks, my name's Dorian Tenore-Bartilucci, though I write fiction and articles as "Dorian Tenore" to give the world’s typesetters a break. :-)  As friends, family, and Twitter/Facebook correspondents can attest, writing is what I enjoy most, but I have a wide variety of interests, as you'll soon see.

I was born in New York City on June 8th, 1963, the daughter of Jacqueline Kehoe (then Tenore, née Cherry), a vivacious model-turned-medical/legal secretary, and Peter James Tenore, a bookie-turned-restaurant manager, both now deceased. My main growing-up was done in the North and West Bronx, with frequent stops in Manhattan, where I lived throughout most of my teen years.

I’ve been married to the love of my life, Vinnie Bartilucci (whom I met in 1985 in appropriately wacky style at an improvisational comedy class, but that’s a story in itself), since July 14th, 1989. Vinnie introduced me to the wonderful world of the Internet, and Amateur Press Associations (APAs) before that. While most APAs have long since transformed into Web sites, I’m still a member of one good old traditional paper APA, the long-running CAPrA, short for Cinematic Amateur Press Association. That said, I'm active in two writers' workshops: LinkOnline, run by my friend Ann Chiappetta (dungarees@optonline.net) and First Draft Online, founded by yours truly, though my friend Avery Cohen took over when life got too busy for me to run it (first_draft@yahoogroups.com; http://www.first-draft.org/).

On October 30th, 1996, Vinnie and I became the proud—and busy! —parents of Siobhan Maggie Bartilucci. As a toddler, she was diagnosed with ADHD and Asperger’s Syndrome, but to our relief and joy, Siobhan has become a smart, funny, high-functioning, high-spirited young lady with an affectionate nature, a love of animation, and excellent grades in her Inclusion classes, in a mainstream school with lots of resources for Aspies and other kids with special needs.

In addition to writing, my other interests include my hometown of NYC (especially Manhattan and the Bronx, where I did most of my growing up), animation, music (especially film scores and music from the 1960s to 1980s) and movies, especially the films of Alfred Hitchcock and Adrien Brody. I also collect goofy postcards and rubber stamps. I’ve dabbled in careers in fields ranging from home video to public relations to low-budget filmmaking to comic book publishing, but all of them allowed me to do some form of writing, with the usual amount of grunt work thrown in. :-)

Writing has been my big love since I was a kid, with articles published in my various school newspapers (including a regular movie review column at my alma mater, Fordham University) and short stories and nonfiction articles published in local and trade publications (including The Hollywood Reporter) and small-press magazines. In fact, my dear Mom had been one of First Draft’s founding members, working on-and-off on a comic novel based on her colorful life with my dad; shades of Jenny Fields and T.S. Garp!

I cut my writing and editing teeth as a contributor and founding member of Fordham University’s literary magazine Alternative Motifs during my years as an undergraduate. Over the years, I've contributed my writing and editing skills to such companies as Crain Communications, Bankers Life, Burson-Marsteller, and A&E. In the early 1990s, I also had the pleasure of working at legendary comic book creator Jim Shooter’s publishing company DEFIANT, where I wrote weekly trade newsletters as well as editing letter columns for DEFIANT Publications and creating character profiles for their dark urban fantasy comic Dark Dominion.

In August 1992, I began working on and off on a labor of love, The Paranoia Club, conceived as a witty, character-driven romantic thriller and novel of manners—in short, the kind of novel I like to read! When Siobhan was born, I promised myself I’d finish PClub (as we call it) before she reached puberty, or at least before I became old enough to be the mother of PClub’s twentysomething protagonists, Sean Wilder and Claire Dennerlaine. Happily, I hunkered down and made my self-imposed deadline, completing an entire draft of the novel in March 2006! After friend and favorite columnist Amy Alkon recommended author/teacher Susan Shapiro's excellent seminar "The Secrets of Selling Your First Book" this past January, to encouraging feedback, I began working with ghost editor Nicole Bokat, who's been helping me trim the fat off my behemoth of a manuscript ever since. I'm also losing weight on Weight Watchers. It'll be interesting to see which slims down quickest, me or my manuscript! :-)

In recent years, I've worked with renowned author and longtime friend David Hajdu as an editorial assistant and researcher on his articles and nonfiction books, particularly on his acclaimed books Positively 4th Street (2001) and The Ten-Cent Plague (2008), both published by Farrar, Straus, and Giroux. Over the years, my own articles and fiction have appeared in Sensations Magazine, The Hollywood Reporter, Video Review, CAPrA, and Shock Cinema, among others.

Three years ago, my cousin Paul Cherry needed a ghostwriter to write articles for his sales training and leadership development firm Performance Based Results (http://www.pbresults.com/). The PBR job has been a perfect fit for me because Paul and I work well together, and my job allows me to work from home and tailor my schedule to Siobhan's school schedule. Besides, any job where I get to write about things that interest me is a good one!

My own tastes in literature and movies tend to run towards humor and suspense, or any writing that combines the two. In addition to my talented writer pals, my favorite authors include Donald Westlake, Peter Stone, Richard Prather, S.J. Perelman, Robert Benchley, Dorothy B. Hughes, Merrill Markoe, Judith Martin, Dorothy Parker, Roald Dahl, Dashiell Hammett, Jim Thompson, Andrew Klavan (in fact, one of my favorite novels is The Scarred Man, a romantic thriller Klavan wrote under his occasional pseudonym, Keith Peterson), and Jon Scieszka. Scieszka (pronounced SHEZ-kah) usually writes books for young people such as The Math Curse, The Stinky Cheese Man, and the Time Warp Trio series, but trust me, his work is witty and sharp enough for adults to enjoy, too. His books are usually illustrated by the equally talented Lane Smith, who designed the look of the characters in the animated movie version of Roald Dahl’s James and the Giant Peach, among other things.

Well, that should be more than you ever wanted or needed to know about me—for now… :-)

Next time: a few words on Alfred Hitchcock's Vertigo.