This post is part of the Sleuthathon,  hosted by Fritzi Kramer of Movies, Silently, from March 16th through March 17th, 2014.  Don your deerstalkers and have a great time! 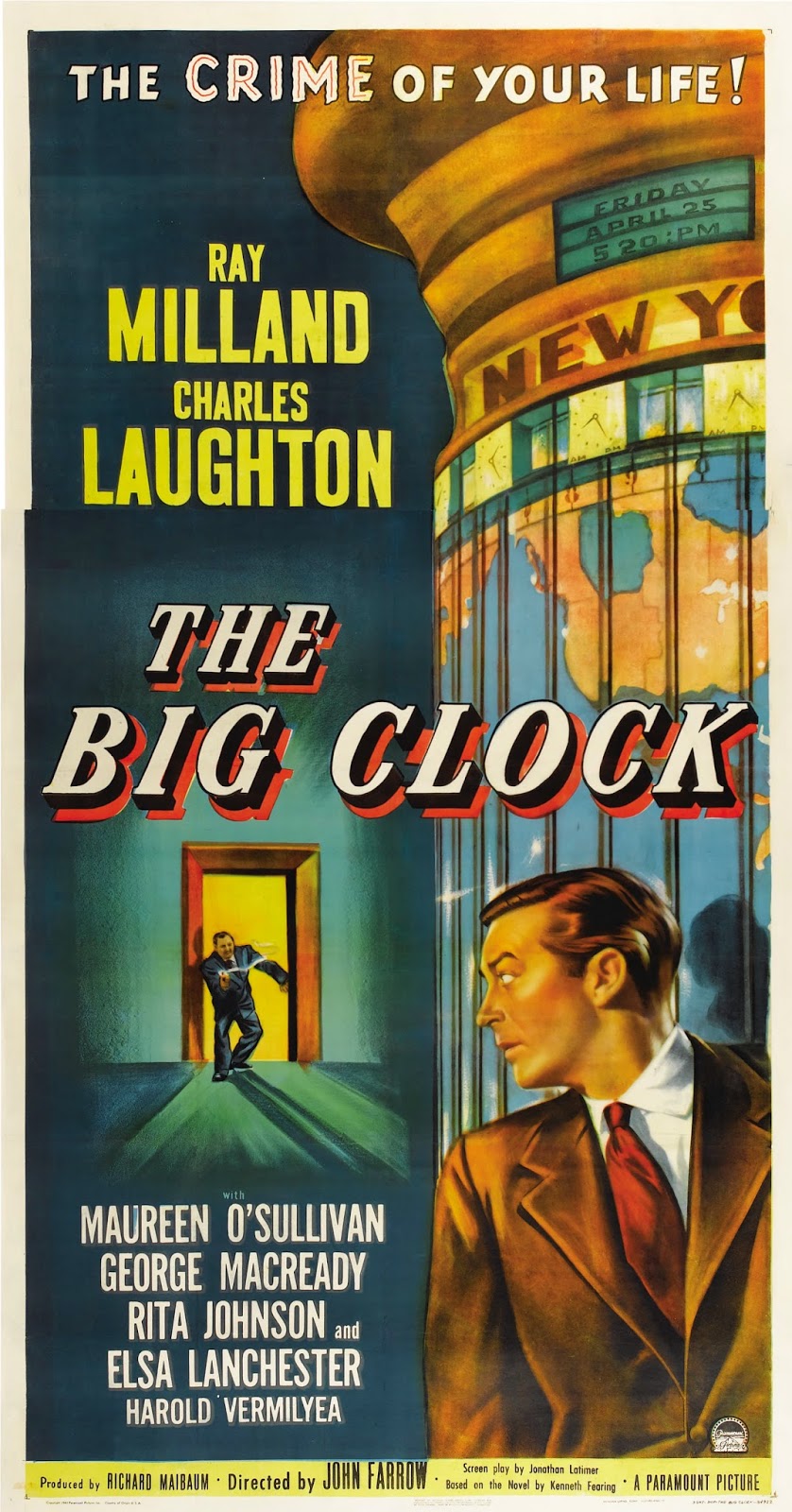 Paramount’s 1948 thriller The Big Clock (TBC), based on poet/novelist Kenneth Fearing’s 1946 suspense novel, is not only a riveting hunted-man story with a fresh twist, but also a cautionary tale about what can happen if you let your job dictate your life:

Time really is money in Earl Janoth’s tight, suffocating world; for instance, this phone conversation between Janoth’s right-hand man Steve Hagen (George Macready from Gilda; Paths of Glory; My Name is Julia Ross): “On the fourth floor, in the broom closet, a bulb has been burning for several days.  Find the man responsible, dock his pay.”  I know we’re all trying to conserve energy (even back in the 1940s), but Janoth doesn’t have to be a tyrant about it!  In this sharp, twisty manhunt thriller, the renowned mystery writer Jonathan Latimer (The Glass Key; They Won’t Believe Me; TV’s Perry Mason) had ably adapted Fearing’s novel for the silver screen, with its blend of suspense, urban cynicism, and smart, snappy dialogue virtually intact.  I also find it intriguing that everything at Janoth Publications seems to be carved in stone, all cold and unyielding.   George does make big money at Janoth Publications,and it’s always cool to work in the big city, but I’ve also known people like George, who have grueling hours and no time to themselves, to the detriment of their family lives, with some co-workers even getting divorces from the pressure.

It’s not all family fun and games when Earl Janoth’s mistress, Pauline York (Rita Johnson of The Major and the Minor; Sleep, My Love; Susan Slept Here) overhears George justifiably bellyaching to Janoth’s right hand man, Steve Hagen (George Macready from Gilda; Paths of Glory; My Name is Julia Ross) about his treatment at Janoth’s hands. At the Van Barth bar, Pauline tries to involve George in a blackmail scheme targeting Janoth, but George isn’t interested, though he does finally stand up to Janoth, getting himself fired and blackballed, and drowns his sorrows at the bar with Pauline, only to realize too late that he missed his train, with his disappointed family already heading to West Virginia without him. It’s The Lost Weekend time as the tipsy George and Pauline go on a bar crawl all over the East Side of Manhattan, hunting for green clocks to spite Janoth on behalf of a colleague who was fired for wanting to use red ink.  Sheesh, Ray Milland’s characters really need to knock off the booze!  Didn’t Ray Milland learn anything from The Lost Weekend?  George and Pauline drop by Burt’s Place (Frank Orth from; Lady in the Lake; Wonder Man, and of course, The Lost Weekend), where you can find anything from a bubble to a sundial, in keeping with the time theme.  The tipsy George and Pauline keep the sundial as a souvenir.  George is also lucky enough to get a painting by George’s favorite artist, Louise Patterson (Lanchester) .  Of course, she’d probably appreciate it more if George hadn’t taken it from her in an impromptu auction, as she huffs, “It’s a pity the wrong people have money!”

In Fearing’s novel, Janoth’s mistress is Pauline Delos.  Janoth and Pauline have a far more heated quarrel in this version, starting with sex between George and Pauline, which they’d apparently been doing for some time!  For people who are always swamped, they always seem to find time to be frisky!  Anyway, one night,  after a visit to Pauline’s pad, Janoth spots George in the shadows; fortunately, he couldn’t  actually see George clearly.   This time, Janoth and Pauline have a far more heated argument in the novel as they each draw first blood.  Compare and contrast each version:

The Movie Version:
Janoth: “At least this time he wears a clean shirt.”

Pauline: “Are you bringing that up again?  Throwing that cab driver in my face?  You never forget him, do you?”
Janoth: “No.  Do you?”
Pauline:  “No, you cheap imitation Napolean!
Janoth:  “And you don’t forget the bellboy or the lifeguard  last summer, or the tout at Saratoga, and who knows how many others?  You don’t forget any of them, including the one to come.”

The desperate but wily Janoth gets a brainwave: he’ll have Steve rig the clues to misdirect suspicion, and he’ll recruit the crack staff of Crimeways to track down the culprit, catching a killer and boosting magazine sales at the same time—and who better to lead the manhunt than our own George Stroud!  George can’t turn Janoth down this time; by leading the investigation, he can help to save himself do with some clever misdirection, buying time for our hero to find the real killer as the tension mounts ; George is actually doing double duty as both cat and mouse!  If George doesn’t deserve a huge bonus if he escapes this nightmare, I don’t know who does!  Fans of TV’s Harry Morgan of  M*A*S*H  fame will get a swell change of pace as a superbly sinister henchman!

On a bittersweet note, Rita Johnson didn’t quite live happily ever after.  In a twist of fate, Rita was seriously injured at a beauty parlor when a 40-pound hood which apparently frequently fell to the floor frequently.  Nowadays, she’d lawyer up and sue those dopes!  There were also rumors that Rita’s then-beau, Broderick Crawford (who went on to win an Oscar for All The King’s Men) had roughed her up, but there was no proof.  Rita managed to get supporting roles, but she was never really the same, and she died at the age of 52.To borrow a line from North by Northwest, it’s so horribly sad, how is it I feel like laughing?