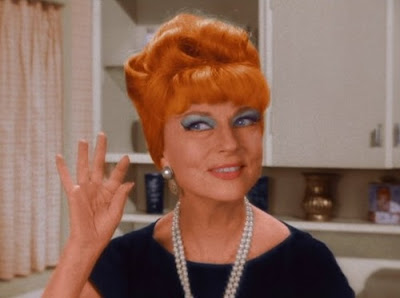 
This is the British Empire Blogathon, hosted by The Stalking Moon and Phantom Empires, from November 14 through November 19, 2014.  Enjoy the other bloggers’ posts, as well, eh what? 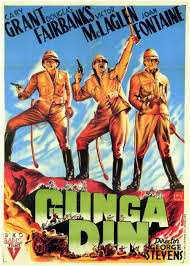 RKO’s 1939 adventure Gunga Din is an adventure of men who know when to have boyish fun, while also knowing when get they must realize when to also be dead serious!  Of course, that doesn’t mean they can’t be pranksters, bless them!

Fun Fact:  Producer Pandro S. Berman had been Lucille Ball’s sweetie at the time Gunga Din was in theaters!

Story by Joel Sayre and Fred Guiol
Story by Ben Hecht & Charles MacArthur, based on Rudyard Kipling’s poem.
Music: Alfred Newman
Produced and directed by George Stevens (Giant; A Place in the Sun)

The Place:  Colonial India, in an encampment of Her Majesty’s Lancers, where there seems to be a shortage of manpower, mostly because soldiers are disappearing – talk about foul play!  No, the luckless men aren’t going AWOL –they’re being murdered by the fearsome Thuggee cult!

Who can get to the bottom of this evil mystery?  Meet our wild and crazy Lancers and best buddies:


*Cutter (Cary Grant from Notorious; North By Northwest.) He’s always wishing, hoping, and praying for riches; get in line, Cutter!  But he’d better be careful what he wishes wish for…

*MacChesney, the most seasoned and brashest of the men, played by Victor McLaglen from The Quiet Man, who also won the Best Actor Oscar in 1935 for John Ford’s drama The Informant.  Our rowdy heroes are a lively bunch, boozing and brawling; men will be boys, bless them!  It’s great rollicking fun, while still being surprisingly moving.


*Last but not least, we meet the more gentlemanly Ballantine (Douglas Fairbanks Jr. from Green Hell); who’s about to marry his sweetie, Emmy (Joan Fontaine, from Alfred Hitchcock’s Rebecca and Suspicion).  As Ballantine’s soon-to-be son-in-law, he’s giving up derring-do to work with Emmy’s dad in the family tea business, and our boys are crestfallen that our three comrades will be leaving!  Will he really be content with a life of Oolong and Earl Grey tea after all the excitement they’ve had together?

Grant, McLaglen, and Fairbanks are truly a dream team, especially the nimble Grant, who was an acrobat in real life.  The gags about Annie the elephant especially crack us up! But it all turns dead serious when our boys’ yen for gold turns into a matter of life or death  when the riches they find turns out to be the Thuggees in the their rumpus room -- YIKES!

Can Din and Cutter and the rest save the day? Sam Jaffe, always a brilliant character actor (The Asphalt Jungle), touches my heart the best; he’s a little fella, but he turns out to have a heart of a lion.  I defy you to watch the end without tears in your eyes, even if you think your're the biggest rough-neck in town!


As The New York Times said in 1939 (a great year for movies in any event) said: “All movies…should be like the five the first-twenty-five and the last thirty minutes…"
I get such a kick out of friendships among Grant, McLaglen, and Fairbanks.  I also enjoyed Robert Coote (Merry Andrew; TV’s The Rogues) as Higgenbotham, a cadet who majors in bumbling.

Want to know for about the Thuggee cult? Watch The Deceivers (1988), starring Pierce Brosnan (1988), one of my dear late Mom's favorite films! (It didn't hurt that Brosnan was and still is a hottie -- but that's a blog post for another time!)

Vinnie plays a few notes -- It's somewhat ironic that Sam Jaffe gets fourth billing in the film, even though he plays the title character. Not to mention that he was forty-seven when he played the role, thought Din was usually described as a "boy." Nonetheless, he unsurprisingly crushes the role.
The film is another example of an "of the time" movie - the Indians were treated as almost sub-human, and no issue was found with that. Heck, I'm amazed the original poem hasn't been the target of a call for erasure from history for its treatment of the people. It's probably saved by the fact that so few people have actually read it.

Likely the main reason Din gets such short shrift is the film takes the tale of the epic poem and demotes it to the "B" plot.  The main story is clearly that of the three Lancers, who are following a Rom-Com plot best seen in The Front Page, summarized as "Friends don't want to see one of their crew get married, and proceed to sabotage the nuptials."  It's so standard a plot it's been getting done for decades -- the most recent example of it I can recall off the top of my head was Saving Silverman, but I'll bet y'all can think of others.


Kali, the goddess of Death and her bully boys the Thuggee have made appearances in a number of films - in addition to The Wife's recommendation of The Deceivers, they also showed up in a slightly more disguised form in Indiana Jones and the Temple of Doom, and in a far funnier form in The Beatles' second filmic sortie Help! Phileas Fogg (David Niven) saved an Indian princess (Shirley MacLaine, a more sore-thumb example of what's now known as "whitewashing" than I can think of) in Around the World in 80 Days, and even Hammer Studios got in on the fun with the -grisly Stranglers of Bombay.

Like Nazis and Republicans, they make a great, easily hateable villain for a story. Even the master criminal Fu Manchu employed Thuggee as assassins.

There's been some controversy as to how much of the news of the Kali worshipers (where the modern word "thug" comes from, dontchaknow) that made it to Europe was real, and how much was a mix of xenophobic hyperbole. The Thuggee certainly existed, and killed many, though there's an argument that the motive was more Earthly that the religious aspect - Thuggee were certainly predominantly thieves, and the robbery was often more a goal than the ritual killing.