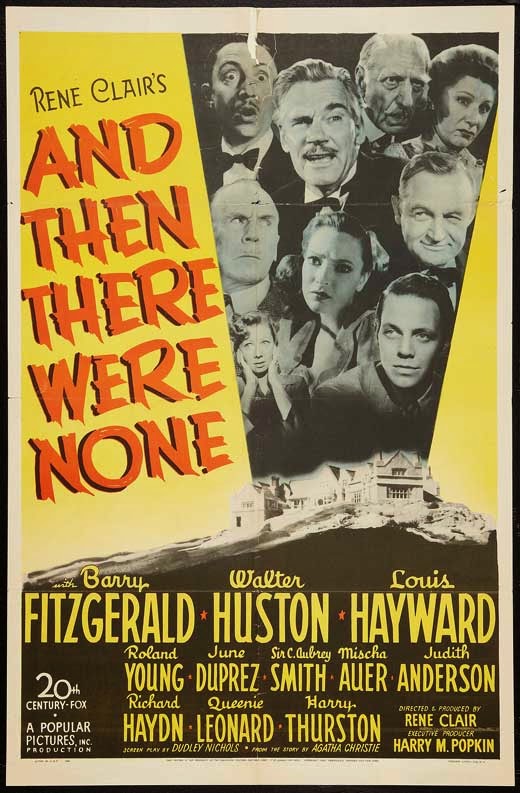 Produced by brothers Leo C. Popkin and Harry H. Popkin, The Popkin Brothers  (Impact; D.O.A.; The Well) produced the film adaptation of Dame Agatha Christie’s 1945 film version of her thriller And Then There Were None, with great success.   And Then There Were None was produced by 20th Century-Fox and directed by the great Rene Clair, and based on Agatha Christie’s best-selling suspense novel, blending chilling suspense and wry humor.  However, Mrs. Christie’s original British version of the novel was originally titled Ten Little Niggers, which didn’t go over well with us Yanks!

As the film begins, the all-star cast slowly thaws the ice as the characters arrive in a boat, most of them being English.

The characters don't talk much, at least at first; they just smile and nod politely, no small feat when many of them are trying not to toss their cookies after that boat ride!  The crashing waves over the opening credits work perfectly; I was tempted to get my snorkel! Let’s meet our travelers, shall we?

And of course, the guests have to eat, don’t they?  That’s where the servants, Mr. and Mrs. Rogers, come in:  Mr. Rogers is played by Richard Haydn from Ball of Fire; The Sound of Music; Disney’s Alice in Wonderland.  Mrs. Rogers is played by  Queenie Leonard (from the original animated Disney version of 101 Dalmations, as well as  the film noir The Narrow Margin; Queenie sure had range!  Of course, we also fell in love with Haydn’s comedic voice for various Looney Tunes, especially Team Bartilucci’s favorite, Super-Rabbit (1943)!

Nikki’s macabre ditty seems about down to the final verse of the “last little Indian" as per the 10 Little Indian rhyme-- but in fact, it’s only the beginning when a male voice accuses them all of various killings!  The deaths involve elderly General Mandrake, who was accused of murdering his rival for the woman he loved, and now seems to have Alzheimer's; Emily Brent’s teenage nephew was put in jail because his heartless Auntie Emily thought he had it coming, resulting in the desperate young man hanging  himself in prison; Nikki’s hit-and-run killed a young couple;  Dr. Armstrong is accused of drunkenness that killed one Mary Cleves; Judge Quincannon is accused of being a “hanging judge” for his own selfish motives; Blore had been hired to watch the guests, though he's not exactly James Bond; Vera is accused of killing her own sister’s fiancee -- jeepers, now that’s sibling rivalry!  What’s more, how can we be sure at least some of the accused might be getting a raw deal?  Curiouser and curiouser!

Will there be a body count in the guests’ futures, if not lawsuits?  Where’s Kayak.com when you really need it? Rogers does what he can as the weekend slowly unravels in terror, what with the guests slowly but surely coming unglued, especially with the body count climbing as each guest is murdered by each new macabre killing, including poor Mrs. Rogers becoming one of the early casualties, supposedly from heart failure. The body count climbs as General Mandrake pushes up daisies; an accidental overdose of his medicine, or something more sinister?  Time to face facts:  the killer is one of the guests!

Emily Brent is the most cold-hearted, if you ask me, not giving a rat’s rectum about her young nephew killing himself; all she cares about is where her next jar of marmalade is coming from!   I think it’s safe to say this inn won’t be giving out any five-star ratings anytime soon from Booking.com, even if the guests do even live that long!  Suspense blends with deft wit.  I especially enjoyed Richard Haydn and his delightful daffy delivery.  Even when the body count rises, there’s plenty of comedy along with the dread and suspense.