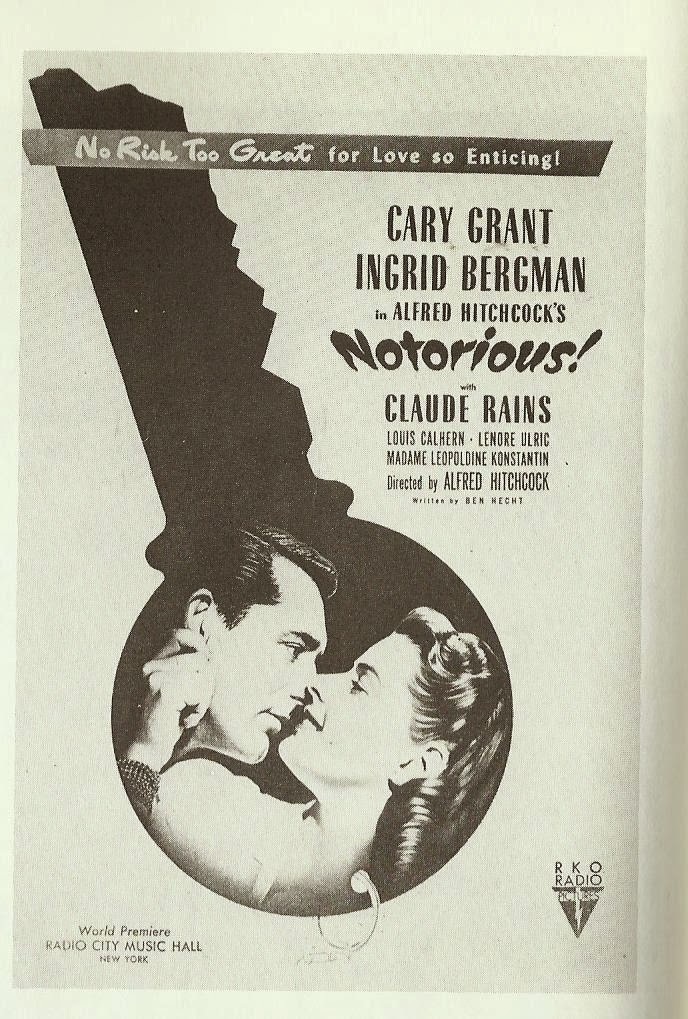 Believe it or not, my first experience with Notorious was when I saw, not Sir Alfred Hitchcock’s intense 1946 romantic thriller, but rather a 1992 made-for-TV retread starring John Shea (Missing) and Jenny Robertson (Bull Durham), because the video rental folks didn’t have the original version at the time!  Really?  Really?!  Please!  I remember my dear late mom and me having a better time fun poking fun at the dull, witless script!  What were they thinking with their silly attempts to “improve” upon it?  It’s like those wackos in H.P. Lovecraft’s supernatural stories about the evil monster Cthulu, whose followers always think the beast will be their best buddy after they summon it, only to be stunned when the monster lays waste to the villains.  It just goes to show that when it comes to classic movies, film fans must accept no substitutes!

Screenwriter Ben Hecht (Spellbound; His Girl Friday) introduces us viewers to the beautiful but troubled Alicia Huberman (Ingrid Bergman from Casablanca; her Oscar-winners Gaslight and Murder on the Orient Express) has been a party girl and a heavy drinker for some time.  In fact, she’s only been along for the ride in life ever since her father was convicted of treason and collaborating with the enemy.  Since then, Alicia broke family ties with her disgraced father, and made booze her constant companion, aside from partying.  After another one of her parties, Alicia chats up a potential conquest, a handsome stranger.  When Alicia speeds way past the speed limit without the cop him giving him a summons,  she realizes the handsome stranger is a Fed, one T.R. Devlin (Cary Grant, who also worked with Hitchcock on  Suspicion and North by Northwest), and boy, is she furious when she discovers he’s a Fed!  Dev doesn’t let Alicia’s wildcat antics bother him—it’s just lights out for Alicia!  The next morning, she wakes up at Dev’s place with a splitting headache, a glass of milk (always popular in Hitchcock movies), and bittersweet news:  Alicia’s father has died by his own hand.  Even Alicia herself is surprised at her own unexpected sorrow for her late father: “I don’t know why I should feel so bad.  When he told me a few years ago what he was, everything went to pot.  I didn’t care what happened to me.  But now I remember how nice he was he once was, how nice we both were, very nice. It’s a very curious feeling, as if something had happened to me and not to him.  You see, I don’t have to hate him anymore, or myself.”

From there, Alicia and Dev work with spymaster Paul Prescott (Louis Calhern of Duck Soup; The Asphalt Jungle) and his Washington colleagues, who send her and Dev to infiltrate the Nazi scum in Rio (by the sea-o)!  Don’t let their suave clothes and good manners fool you—they’re no-goodniks, no matter how sensitive and dashing they look underneath it all!  With Alicia sobering up, both she and Dev succumb to each other’s magnetism and they can’t help falling in love with each other, in spite of the fact that they both have more issues than a Hudson’s News stand!   Dev can be a prickly pear in any case, considering his serious trust issues where women are concerned.  In fact, sometimes Notorious feels like a version of The Lost Weekend with sexier stars!  But when Alicia and Dev do let their hair down, those scenes are among the hottest, most romantic scenes on film; I’m surprised the film stock didn’t simply burst into flames!  Notice how cold Dev acts when Prescott mentions how their main target, Alexander Sebastian (Oscar nominee Claude Rains from The Invisible Man; Casablanca) acts toward Dev when Prescott mentions Alicia’s long-ago “hunger” for Alicia when he was in love with her.  Tsk, tsk, Devlin sure isn’t being very business-like!   What would James Bond say?

Alicia makes contact with Alex, thanks to the old runaway horse trick, and suave Alex and Alicia pick up where they left off, while Dev acts like a jealous lover instead of the cool spy-type guy he needs to be on this assignment.   It’s amazing any work gets done at all with these two, especially when jealous Alex takes the next big step: marrying Alicia!   Prescott thinks it’s a swell idea; now it’ll be even easier for the new Mrs. Sebastian to keep her eyes and ears on the Nazi scum, to Prescott’s delight and Devlin’s passive-aggressive frustration!   Frankly, Devlin is especially in danger of shooting himself in the foot, perhaps literally!  Someone needs to give those crazy kids a time out, or maybe just a smack in the head!  No doubt it must annoy Dev no end that Alex is so suave and attentive to his lovely new wife.  Too bad Alex is both a Nazi and an insecure older man trying to keep his new bride happy.  Sheesh, where’s Ingrid Bergman in another romantic Hitchcock thriller when you need her:  Dr. Constance Petersen from Spellbound!

Instead of a honeymoon, our sexy spies throw a party to celebrate the newlyweds, with their old pal Dev keeping their eyes and ears open.  They hit pay dirt when Dev accidentally knocks over a wine bottle that’s actually “vintage sand!”  In fact, it's actually metal ore; that’s one way to perk up a honeymoon, as well as giving Dev and Alicia an opportunity for some romance, by George!  But  jealous Mama Sebastian (the regal, superb Leopoldine Konstantin) has Alicia’s number, and it’s gonna come up snake-eyes unless Dev stops acting like a jealous dolt and saves Alicia so that, as Grant said in North By Northwest: “You and I are going to do a lot of apologizing in private!”

Ingrid Bergman gives one of her very best performances as Alicia, juggling danger and romance in a relationship that’s complicated, to say the least!  Dev can be glacial or sizzlingly romantic at the blink of an eye.  The “Good Guys” essentially force Alicia to prostitute herself by marrying her off to suave Alex.   The hell of it is that Alex, an old friend of her father’s, is far more loving and romantic than Dev, despite his insecurity about his beautiful young wife, especially with Alex’s Mother-in-Law From Hell.  In any case, this sure tosses a monkey wrench into Alicia’s sizzling yet stormy romance with Dev!  It’s one of the most adult movies Hitchcock ever made; despite Bergman and Rains seemingly sleeping in separate beds, this film was quite adult for its era.  It’s not only a crackerjack espionage thriller, but also a moving, disturbing look into the dark recesses of the human heart.

In Robert A. Harris & Michael S. Lasky’s book The Films of Alfred Hitchcock (Citadel Press, 1976), Hitchcock realized he and co-author Ben Hecht  (Spellbound; His Girl Friday), had turned out to be ahead of their time when they decided to make uranium metal ore Hitchcock’s MacGuffin, a.k.a the item that makes our heroes hot and bothered, suspense-wise!  Indeed, Hitchcock used the uranium gambit even before it was used at Hiroshima!  Nobody was supposed to know about its powers, or that it would be used in an atom bomb for the movie.  In fact, producer David O. Selznick thought it was such a preposterous idea that instead of producing Notorious himself, Selznick sold the package to RKO (including Duel in the Sun).  Apparently even having the term “uranium” in the script was scaring the producers!  I was amazed by the visuals of Director of Photography Ted Tetzlaff (My Man Godfrey; The More the Merrier), especially that long shot at the party that ends on the key in Alicia’s hand—wow!

Hitchcock’s talented daughter Patricia Hitchcock O’Connell was a triple threat herself, having co-starred in her father’s films;  Stage Fright was her debut); then Strangers on a Train; (for which she deserved an Oscar nomination, if you ask me); Psycho; and many appearances on TV's Alfred Hitchcock Presents as she eventually became a producer.  I was lucky enough to interview Pat (if I may be so bold) in 1990 for Video Review, and she explained:  “My father was really able to do all the things he enjoyed doing artistically and technically.   He also used brilliant actors down to the smallest parts, like the Germans—especially Leopoldine Konstantin as Alex Sebastion’s mother…The only problem was that because of the politically sensitive plot about making a bomb out of uranium, my family was followed by the FBI for months.”  How’s that for cinematic realism?

The whole cast is absolutely stellar, including the always-suave Rains, terrific in a complex role that requires him to be believable not only as a suave lover and villain, but also a doting yet jealous and insecure husband of a lovely young wife, as well as being a villain, and having to put up with a domineering mother to boot;  to quote North by Northwest, I'm beginning to think Rains was underpaid!  I think his Best Supporting Actor Oscar nomination was richly deserved.   (I understand Rains was quite the romantic lover in real life!)   At times, I almost felt sorry for Alex, knowing Alicia was just stringing him along and coping—and even worse, he has to put up with The Mother From Hell, too, always a staple in Hitchcock’s wicked little arsenal!   With a forbidding matron of a mom like Mme. Leopoldine Konstantin as Alex’s mother, it’s no wonder Alex is still under Mama’s thumb despite his suave manners.  I must admit that the first time I watched the climactic love/rescue scene with Alicia and Dev’s “pillow talk,” in which Dev rescues Alicia from an agonizing death from slow poison had seemed a little corny at first.  But when I watched it again after all this time, now with a fresh outlook, I found it touching my heart!  Roy Webb’s swoony score is excellent, yet sometimes I wish I could somehow build a time machine or Way-Back Machine or the like, so that Hitchcock could have met and worked with Bernard Herrmann earlier in his career!

Claude Rains was only 5' 6" tall, a good three inches shorter than Bergman.  They were able to hide the difference when everyone was moving about, and in scenes where they stood next to each other, he just stood on a small platform.  But when he was moving and Ingrid stood still, they had to rely on strategically-placed ramps he'd walk up as he approached.  Watch how much taller he gets as he walks towards the camera here!

Steve Martin used footage from Notorious in his comedy Dead Men Don't Wear Plaid.  Here's how two scenes from very different parts of the film were stitched into one very differently-toned one!
23 comments: