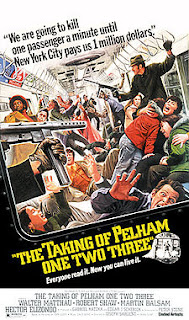 Pelham 123 was nominated in 1976 for The BAFTA Awards, the British version of the Oscars.  Balsom was nominated for Best Supporting Actor for his performance, and Shire was nominated for his musical score. Stone was nominated for the Writers Guild of America Award for “Best Drama Adapted from Another Medium.”  Thrills, chills, suspense, snappy dialogue—not bad for a 35-cent subway ride!
19 comments: