I WAKE UP SCREAMING: Obsession, You are My Obsession…. 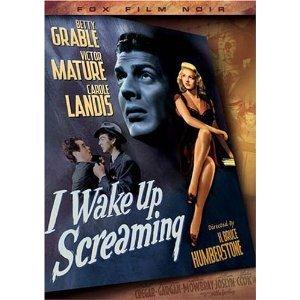 Victor Mature, Betty Grable, and Carole Landis had all been in movies together in various combinations (mostly musicals) but the suspenseful 1941 murder mystery I Wake up Screaming (IWuS) was the first film noir all three of them starred in. Indeed, on the DVD’s commentary track, film historian Eddie Muller dubbed it “proto-noir,” since it was in fact 20th Century-Fox’s first film noir. Maybe that’s why IWuS still feels fresh today; everyone in it and everything about it brims with verve and brio, as if all concerned were eager to start filming.

The great Steve Fisher’s original 1941 novel was set in Hollywood, but Darryl F. Zanuck had apparently put the kibosh on Hollywood exposés, so screenwriter Dwight Taylor transplanted this “wrong man” tale of love, murder, and obsession to New York City. I must admit that as a native New Yorker, I loved the idea of relocating the story to Manhattan and environs, with the glamour of Broadway, supper clubs and Big Apple-style brassiness. I just think of IWuS as the East Coast version of the story, while Fisher’s version is the West Coast version.  Fair warning to those who haven’t read the novel but want to: go out of your way to find the original version, because Fisher’s updated 1960 edition feels unstuck in time, and not in a good way. Fisher (or perhaps his publisher?) tried to shoehorn in then-modern references, with mixed results.

IWuS’s plot starts more like Pygmalion (or My Fair Lady if you prefer musicals) than Fisher’s pulse-pounding crime fiction.  It starts in a Manhattan police station, with “the bulls” sweating our beleaguered yet determined hero, promoter Frankie Christopher (Team Bartilucci fave Victor Mature!). In flashbacks, we learn how Frankie and his friends, Robin Ray (Alan Mowbray), a veteran actor, and Larry Evans (Allyn Joslyn), a newspaper columnist (ah, the newspaper column, the granddaddy of the blog! But I digress...), grabbed a bite at a Times Square eatery one night and ended up betting they could transform their tart-tongued but beautiful waitress, Vicky Lynn (the incandescent Landis), from a hash-slinger to a headliner by putting her name in ads, newspapers, and magazines, and plastering her lovely kisser all over town. Vicky’s more practical sister Jill (Betty Grable) is skeptical, but supportive nevertheless.

The starmaking scheme works all too well:  dazzled by her own success, Vicky snares a Hollywood screen test and contract right under her shocked benefactors’ noses, only to be murdered on the eve of her Tinseltown departure.  Jill finds Frankie standing over Vicky’s body, swearing he didn’t kill her, he just found her that way. Hotshot Police Inspector Ed Cornell (Laird Cregar) insists that Frankie’s lying.  Fifteen-year veteran Cornell has never been wrong, and he’s obsessed with making an example out of hapless Frankie.  But does justice alone explain Cornell’s unwavering, obsessive zeal, or does he have a hidden agenda?

The cat and mouse game is afoot between Frankie, hell-bent on proving his innocence, and Cornell,
a smoothly sinister behemoth of a man who’s ready, willing, and able to go to any lengths to railroad Frankie. Undeterred by the lack of a search warrant, Cornell even manages to sneak into Frankie’s bedroom to watch him while he sleeps (“Someday you’re gonna talk in your sleep, and when that day comes, I wanna be around.”), doing his damndest to wear Frankie down with smilingly delivered threats and manipulation. With wily Cornell’s festering resentment of Frankie, you can’t tell what he’ll pull next. Always a formidable, menacing presence, Cregar rocks in the role.  His silky voice and charming smile somehow make him even scarier; no wonder IWuS helped to make him a sought-after character actor of stage and screen. Victor Mature’s Frankie is a great match for Cregar’s Cornell, with his outer charm and inner toughness. Always an appealing presence, Mature was a better actor than he got credit for; people often underestimate his talent and screen presence because he always makes it look so easy. Mature was a hottie, too; no wonder Cornell sneeringly calls Frankie “Handsome Harry!” Elisha Cook Jr. is fine as Harry Williams, the oddball switchboard operator and original suspect.  Fun Fact on film historian Eddie Muller’s commentary track: Cook filmed his role as Wilmer in The Maltese Falcon for John Huston at the same time he was filming IWuS for (H.) Bruce Humberstone. It’s a shame that both Landis and Cregar died so young, though: suicide for Landis and crash-diet-induced heart failure for Cregar. But their performances in IWuS are unforgettable.

Getting back to our plot, things heat up as Jill and Frankie acknowledge what sharp Vicky had already realized:  they’ve fallen in love, and they’re eager to protect each other. When the plucky Grable’s wholesome sexiness meets Mature’s playful yet virile allure, it’s Chemistry City! It’s so cute and typical of the era to see Jill get all starry-eyed when Frankie admits he wants to marry her.  It’s even cuter when Frankie
reveals his original surname as Jill dreamily sighs, “Mrs. Botticelli.”  Still, Vicky’s whirlwind trajectory from waitress to glamour girl to murder victim plunges Jill into a world of murder, terror, and obsession, propelling her to flee with the man she loves, dogged by Cornell at every turn. Taylor’s screenplay tightens Fisher’s sprawling novel almost to the point of claustrophobia (this time, it is in a good way!), with sharp, witty dialogue and comedy relief balancing the nerve-racking tension. The dialogue is snappy, suspenseful, and poignant in all the right places.  Loved that “key” exchange scene early on!  Edward Cronjager’s lush, expressionistic black-and-white photography is a thing of shadowy beauty, used especially well in Cregar’s early scenes as combinations of heavy shadows and bright interrogation lights hide him from view.

Even with studio sets, IWuS evokes early 1940s NYC right up to the rooftops. When Frankie shows Jill his old East Side neighborhood, it’s fun as both a getting-to-know-you sequence and a mini-travelogue of the non-touristy places where native New Yorkers go. This continues when the lovers become fugitives and Frankie shows Jill where to hide in the big city, including the library and a 24-hour grindhouse. Even the swimming pool scene has that spirit; sure, it’s there primarily to show off sex symbols Mature and Grable in their swimsuits (with today’s athletic types being so buff and ripped that you could cut yourself if you touched them, it’s interesting and refreshing to see what kind of physiques were considered hot back in the 1940s), but it reminded me of the city’s neighborhood pools at their best. One bit that’s ironic in retrospect, considering IWuS came out before the U.S. entered World War 2:  when Larry spots Frankie and Jill dancing at a nightclub soon after Vicky’s murder, he angrily calls in a blind item about them for his column, snapping, “Scrap the stuff about the Japanese spy with the Kodak and run this!” 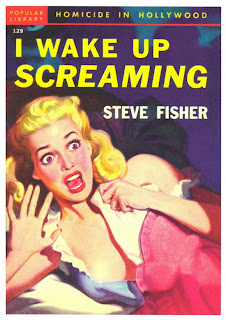 I like the quirky use of music here, too; you might never listen to “Over the Rainbow” quite the same way ever again.  Fans of vintage movie music will notice that the opening credits music, an Alfred Newman piece known as “Manhattan Street Scene,” is the same theme used in a few years later in the 1946 thriller The Dark Corner (which I must blog about sometime, as it’s one of my faves; but again, I digress...).  When Jill brings Frankie home to show him an incriminating letter, listen carefully: in the background, “Over the Rainbow” and “Manhattan Street Scene” cross-pollinate into a sinister new theme, courtesy of music arranger Cyril Mockridge.

Ironically, although Mature and Joslyn each have scenes where they awaken with a start, nobody in I Wake up Screaming ever actually wakes up screaming!  How can you wake up to find a huge, imposing cop like Cregar’s Cornell staring at you and not scream?  And hey, if you’re a completist like I am, you might want to check out the 1953 remake, Vicki, though it struck me as a pale imitation. Here’s a link to my IMDb review, if you’re interested:
http://www.imdb.com/title/tt0046515/usercomments-13