CMBA Movies of 1939 Blogathon - IT'S A WONDERFUL WORLD: The Original Colbert Report! 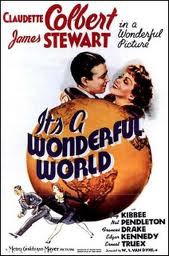 Don't rack your brain trying to remember Edwina's lovely poem from your English class; you'll find her verses in the Hollywood school of poetry. This charming if somewhat ditzy and eccentric poetess (that’s what they call her, a poetess, not a poet. It’s a 1939 thing) is played by that luminous, long-running Oscar-winner Claudette Colbert in It’s a Wonderful World (IaWW). With that title alone, you’d have every right to expect IaWW to be a wonderful screwball comedy-mystery. It’s got a heck of a pedigree. For starters, the director is none other than Oscar-nominee W.S. Van Dyke, who brought us San Francisco (1936) as well as The Thin Man (1934) and several of its sequels. The script was a collaboration between talented, versatile screenwriters Ben Hecht and Herman J. Mankiewicz (the latter being part of the Mankiewicz filmmaking family, including his grandson Ben Mankiewicz of TCM fame), whose combined resumes included such classics as Nothing Sacred, Twentieth Century, Dinner at Eight, Citizen Kane, The Front Page and its distaff remake His Girl Friday, and several of Alfred Hitchcock’s best films. Now team up Claudette Colbert with a pre-Oscar James Stewart (note that Colbert’s name appears onscreen in a larger font than Stewart’s, since she was the bigger star at the time). It didn’t hurt that the film’s title brought to mind the stars’ beloved films It Happened One Night and It’s a Wonderful Life (even if …Life took audiences quite a while to get into film fans’ hearts. I won’t lie to you, folks: we of Team Bartilucci have always found It’s a Wonderful Life infuriating for myriad reasons. But I digress….). The action is set in both New York City and upstate New York, which is a plus for a native New Yorker like me. On top of that, keep in mind that the year was 1939, a banner year for great movies! With all that going for IaWW, the resulting collaboration should be a real crowd-pleaser, right?

Well…almost. IaWW wasn’t bad, but for much of its 86-minute running time, I found it amiable at best, as opposed to actually wonderful, laugh-out-loud funny, or nail-bitingly suspenseful. Make no mistake, the film has its moments, but as a whole, it didn’t truly grab my undivided attention until about the last 40 minutes or so, when there was shooting, tension, and clever scheming to unmask the villains. But I’m getting ahead of myself! Stewart plays a NYC private eye with the manly-man name of Guy Johnson. Showing his range just as he did in After the Thin Man (1936), Stewart’s Guy is no folksy charmer here, but a cynical tough guy who thinks dames are dopes, and isn’t afraid to cuff ’em one if they start squawking. (If Guy tried that today, he’d be in for a lawsuit!) Come to think of it, the role of Guy was probably good practice for the darker, more emotionally complicated roles Stewart played under the direction of Hitchcock and Anthony Mann in the 1950s.

Guy works with his older, more seasoned partner “Cap” Streeter (Guy Kibbee) for a private investigation firm called, appropriately enough, Private Inquiries. Their biggest client is the much-married souse and tobacco heir Willie Heyward, a.k.a. “Willie the Pooh” (played by Ernest Truex, great as put-upon milquetoast types in His Girl Friday, Whistling in the Dark, and Alfred Hitchcock Presents, among others). Having previously worked “demonstrating electric belts in drugstore windows,” Guy’s determined to hang onto his meal ticket: “Willie the Pooh’s my dream man, and I’m gonna keep fishing him out of manholes just as long as he keeps paying off.” Too bad Willie gets himself framed for the murder of Dolores Gonzales (Cecilia Callejo), a “Broadway nymph” and bubble dancer a la Sally Rand who was all set to sue Willie for allegedly jilting her. The only clue to her killer is a dime mysteriously cut in half. Our perplexed P.I. finds himself framed by Vivian Tarbel, a.k.a. the newly-minted Mrs. Heyward (Frances Drake of Mad Love and the 1935 version of Les Miserables) and her honey, Al Mallon (Sidney Blackmer, the great character actor who’s graced everything from Charlie Chan in Monte Carlo to Rosemary’s Baby). Before you can say “Nick Charles,” Guy is charged with conspiracy and sentenced to a year in Sing Sing.

On the train to prison, Guy is handcuffed to Sergeant Koretz (Nat Pendleton, Thin Man alumnus and one of Team Bartilucci’s favorite wrestlers-turned-actors), accompanied by Lieutenant Miller (Edgar Kennedy, Mr. Slow Burn himself) as they pass the time playing poker. Guy notices a personal ad in a nearby newspaper: “Why don’t you come to Saugerties Theater Wednesday evening, and see your long-lost husband? HALF-A-DIME.” (For you readers unfamiliar with upstate New York, yes, Saugerties is a real town.) Guy tricks Koretz into leaving their compartment for a smoke, and *SPLASH!* Guy manages a watery escape under cover of night. But our perky poetess Edwina happens to see the whole thing. Before you can say “I swear by my eyes,” (Edwina says that through the whole picture, not unlike Little John in the 1949 Bugs Bunny cartoon Rabbit Hood), Guy takes Edwina hostage, and wacky hijinks ensue, including Guy's hilarious attempt to pass himself off as a scoutmaster. Elsewhere, in one of my favorite bits, Koretz tries to convince the local police that he was jumped by a mob instead of Guy tricking him and knocking him out singlehandedly. I must say, Guy could be so obnoxious sometimes, I wouldn’t have minded if someone had punched his lights out!

﻿
﻿ Bit by bit, the comedy starts to percolate as Guy and Edwina find themselves obliged to join forces out in the wilds of upstate New York, with Edwina alternately helping and unwittingly hindering Guy as he tries to prove his innocence and save Willie from the electric chair. As I said, the first two-thirds of IaWW were watchable if not exactly full-tilt hilarious—but then a miracle happens, as described by my husband Vinnie: “Suddenly Claudette Colbert shifted the plot into reverse psychology!” Quick thinking, comedy and suspense suddenly blend together beautifully during the climax at the Saugerties County Theatre’s production of the Maxwell Anderson/Laurence Stallings play What Price Glory? Slowly but surely, Guy warms up to Edwina, who’s already falling in love with him despite the bickering you'd expect in such a situation (just ask Robert Donat and Madeleine Carroll of The 39 Steps, among others). They infiltrate the theater when scene-stealing grand dame theater director Cecil Cunningham hires Guy as the play’s new Southern-accented actor “Cyril Hemingway.”

Cap comes to help Guy, only to become a human Whack-A-Mole as Edwina’s well-meant attempts to help both men keep backfiring. (I was starting to worry that poor Cap would be brain-damaged before this dizzy tale was over!) Vivian’s long-lost actor hubby turns up, unaware he’s got a target on his back, the poor slob! The stage cast within the movie cast includes Team Bartilucci faves Hans Conried, George Chandler (nervous bartender Louis Ord in Dead Reckoning) and Grady Sutton (who I always remember from the Odd Couple TV series episode “The Flying Felix” with Tony Randall’s attempt at lip-reading: “I…sense…much… trouble…in…the…fuselage…Frederick!” I know, I know, I’m digressing again! J)  There’s genuine suspense in the urgently-whispered conversation between Cap and Guy as we’re reminded that Willie’s life is at stake. There’s even a nifty little catfight between Edwina and Vivian at the end! 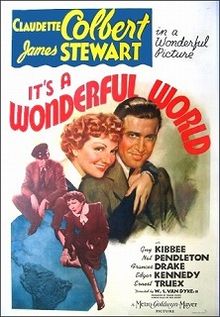 As Frank Miller explains in his article on the TCM Web site, Claudette Colbert had looked forward to getting MGM’s legendary glamour treatment. However, her hopes “were dashed when director W.S. Van Dyke was assigned to the picture. Although he had helped create the screwball genre as director of The Thin Man in 1934, he was popular with studio head Louis B. Mayer mainly because he worked quickly, earning the nickname ‘One-Take Woody.’ His female star was appalled at how quickly he threw the film together, being used to the more leisurely pace at her home studio, Paramount, where great care was always taken to showcase her beauty.” Anyway, Colbert got more opportunities for glamour roles at MGM in films like The Secret Heart (1946)