I haven’t seen House of Cards (HoC) in years, mostly because I haven’t been able to find it on DVD or any other format that I can afford that would work with my good old American DVD player.  I can’t even find a trailer for it, although I've found plenty for the 1993 drama by the same name starring Kathleen Turner as a mother trying to help her apparently autistic child. However, thanks to the many times I saw HoC on TBS and other local channels in my youth, I remember it like I saw it yesterday!

During the 1960s, Universal Pictures made a mini-genre out of the Lighthearted International Technicolor Romantic Suspense Thriller, with such rollicking adventures as Charade; Arabesque; Mirage; Blindfold, and A Man Could Get Killed. Before making HoC, director John Guillerman had directed leading man George Peppard in the 1966 World War 1 thriller The Blue Max and the 1968 private eye drama P.J. (Note to Vinnie, all George Peppard fans, and all fans of Disney’s animated school comedy series Recess: Yes, P.J.’s last name is in fact Detweiler! But I digress....) I’ve always felt that HoC was one of the loopiest of the lot from its opening sequence: tracking shots of Paris from a corpse's-eye-view! There it is, floating in the River Seine practically unnoticed by the populace. Having grown up in a big city (NYC, for those who came in late), I know city dwellers tend to be blasé about things no matter what city they live in, but come on!

Peppard plays Reno Davis, a sort of hip 1960s Hemingway type who drifts from one country to another, either writing his novel or getting into boxing matches. Indeed, when we first meet Reno, he’s getting the hell beaten out of him in a Paris boxing ring. One night, someone shoots at him—and discovers the triggerman is a frightened child, Paul de Villemont (played memorably by the haunted-eyed Barnaby Shaw). Reno drags the little sharpshooter home to his surprised widowed mom, Anne, played by the luminous Inger Stevens with a vulnerable sophistication reminiscent of Eva Marie Saint in North by Northwest. To quote New York Times movie critic A.H. Weiler, “Miss Stevens is...pretty enough to turn any adventurer's head,” and Reno and Anne almost lose their own heads in more ways than one. You see, it turns out the glamorous but troubled Anne is the American widow of a French general; she and Paul are virtual prisoners of her sinister in-laws and their cohorts, including British actor Keith Michell (TV’s The Merry Wives of Windsor and Henry VIII and His Six Wives, among others) as the secretive psychiatrist Dr. Morillon. Anne and Paul take a shine to Reno, and the feeling is more or less mutual. No surprise, really; at the very least, Reno’s iconoclastic loner routine is surely a welcome change of pace from the Daphne DuMaurier types slinking around the family chateau. Anne hires Reno as Paul’s tutor/companion. The DuMaurier types don’t exactly welcome Reno with open arms, which may also explain why men in Anne’s orbit don’t seem to live too long whenever they try to help her and Paul, including that poor slob we saw floating lifeless in the Seine earlier, one Sidney Scott (who doesn’t even get a credit in the film for his trouble, poor guy).

Soon we viewers are catapulted from DuMaurier Land to Robert Ludlum Lite as the chateau’s occupants turn out to be not just any old Eurotrash stuffed shirts, but actually part of a Fascist group led by the powerful Leschenhaut, played by Orson Welles at his haughty and sinister best. Seems that Papa wanted his little man to be brought up as a Hitler youth! Before you can say “Alfred Hitchcock sent me,” Paul is kidnapped, Reno is framed for murder, and he and Anne (who’s not overjoyed about bodyguard Reno dropping the ball with her child; as a mother myself, I’m on Anne’s side!) are chasing and being chased all over Paris and Rome trying to save Paul and the world from these dastardly so-and-so’s.  House of Cards was adapted from renowned mystery author Stanley Ellin’s 1967 novel, and set in opulent locations including the Colosseum and all manner of manors all over France. True, some of the plot twists in James P. Bonner’s screenplay (actually a nom de plume for the screenwriting team of Irving Ravetch and Harriet Frank Jr., who brought us Hud, Hombre, The Cowboys, and Norma Rae, among others) stretch credibility to the breaking point (especially Dr. Morillon’s true identity). Also, some of the more attention-grabbing stuff is never explained, although I’m willing to blame some of that on TBS editing the version I saw on TV (besides, sponsors have to squeeze in commercials; they have to eat, too, I guess). Despite these quibbles, HoC still manages to be entertaining. When I first saw it on TV in my younger days, I found Francis Lai’s score to be a little syrupy for my taste, but it’s grown on me over the years. George Peppard, in his prime, was well-cast as a cynical rogue, with his all-American good looks, hard-boiled flippancy, and breezy charm. He cracked me up whenever he improvised outlandish excuses to authority figures, like in the Fountain of Trevi scene and this sexy sequence with leading lady Inger Stevens:

Inger Stevens had been a favorite of mine since I first saw her on the TV series version of The Farmer’s Daughter. I always sensed something unconventional about her. Indeed, Stevens did have difficulties in life, and left us far too soon, but once you saw her, you couldn’t forget her. I thought Stevens was an excellent match for Peppard both physically and personality-wise, with screen presence aplenty. It wasn’t just Stevens’ striking blonde beauty and honeyed alto voice that made her stand out; she also had a warmth that belied her Nordic Ice Maiden looks, and a knack for being at once worldly and wholesome. This quality is reflected in Stevens’ fab Edith Head costumes, too. 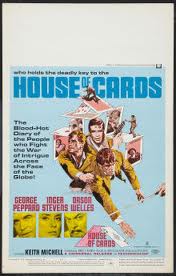 This wildly complex thriller probably shouldn’t be watched by anyone with a migraine or a short attention span—but if you're in the mood for a well-cast conspiracy yarn that doesn't take itself too seriously, keep an eye out for HoC in your TV movie listings. Better yet, bug the folks at Universal and urge them to at least put out a House of Cards print-on-demand DVD!

A smorgasbord of George Peppard scenes (with and without Inger Stevens) for your viewing pleasure!