On How Crime Does Not Pay - Even in the Movies 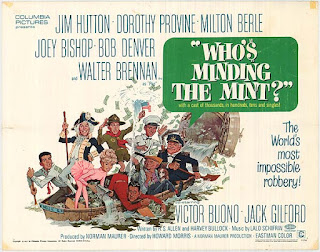 Team Bartilucci's hubby half, Vinnie Bartilucci, is in the spotlight this time, with one of our favorite genres, Heist movies!  Take it away, Vinnie!
Heist movies have been around as long as movies.  The Great Train Robbery was one of the first films, made in 1903, a staggering twelve minutes long.  And for almost all of that time, until the Seventies at least, the rule was that the criminals could not get away with their gains. They'd be caught, shot, betrayed, done under by their own greed, or some combination of the above. The idea was all based around what we now call "Imitable Action," what they analyze children's TV shows for. The idea is if something looks cool, people will try to do it. We claim that's a lot of flummery, but about 47% of YouTube videos put the lie to that.

Even Alfred Hitchcock, on his classic TV show Alfred Hitchcock Presents, was forced to add codas to his stories that revealed that no matter how perfect the murders or crimes were, the miscreants were found out after the cameras stopped rolling.   Sometimes they were witty epilogues, like the one in the classic Lamb to the Slaughter, but more often than not they were almost throwaway, half mumbled, "Of course they were eventually found out and convicted for their crimes" that almost ended with a wink. That rule about The Guilty Must Suffer was all but inviolate.

Heck, even in The Treasure of the Sierra Madre, they couldn't get the money, and they didn't even STEAL it. All they did is get greedy, and it was only ONE of them. One almost gets the impression that the message trying to be hammered home wasn't "Don't steal," but "Don't try to better yourself, stay in your place."  But of course, that would be excessively paranoid, wouldn't it?

Come the Sixties, we started to see a subtle shift to the Caper Movie; the planning was much grander, and the payoffs larger than ever. Instead of a mere carefully-planned bank robbery or some such, we'd see a meticulously organized break-in, or perhaps a complicated con job. Plans so outlandish and daring that you want them to get away with it out of sheer respect.   But still that rule had to go and piss on the fish. They came up with a new twist, though; the caper-planners might be able to avoid incarceration, but they could still never get away with the money. So in the original Ocean's Eleven, the money gets burned up as carcinogenic co-conspirator Tony Bergdorf  (Richard Conte) gets unexpectedly cremated. Michael Caine and the gang from The Italian Job get placed in a deadly balancing act with the escape bus teetering on the brink, with the lovely lolly at the far end over the cliff. Every time they try to creep forward to grab it, the bus CREEEEKS precariously forward. I always thought this ending was what was being tributed at the end of Guy Ritchie's Lock, Stock and Two Smoking Barrels. Even my beloved Fitzwilly couldn't get away with the money, no matter how benevolent his reasons.

The Wife analyzed Topkapi a few months back, another example of a cast that you really want to see get away with it, but simply can't. We admire and  appreciate the work of the mastermind of a fine caper, and enjoy watching the exploits of such films come together, as much as we hate watching them fall apart at the end.

The more outlandish the capers got, the more you wanted them to get away with it. They tried everything - they made the miscreants likable, even noble. 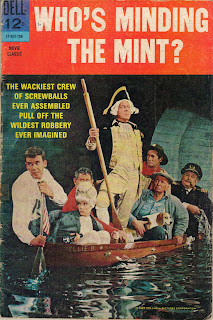 Two films with somewhat similar capers were also forced to slap on the ironic punishment.  1967's Who's Minding the Mint? (available from the Warner Archive) put Jim Hutton (TV's Ellery Queen) in a position where he's forced to break into the mint to print off legal tender to make up for an accidental destruction of fifty thousand dollars to avoid incarceration.   Long story short, it balloons into printing millions of dollars, and results in a goddamn brilliant madcap comedy. But again, they can't possibly be allowed to get away with the money, so it accidentally gets picked up as trash, leading to a mad chase across town to catch up with the garbage truck before the money is dumped on a barge and lost. This being one of the cases where the crime was for a good reason, enough is salvaged to save Jim's bacon, but no more. At least in this case, they added a coda to suggest they might yet succeed, as over the closing credits, the cast is in scuba gear, heading down to try to retrieve their surreptitious spondulix.  Another house favorite, Gambit, has a similar "Maybe it's not too sad an ending," where while Michael Caine won't benefit from his crime, another cast member might.

A year later, Seven Times Seven was released in Italy with the same crime - break into the Mint and print a bunch of cash. This one was a bit more complex - the plotters were in prison, so they would have to break OUT of prison, INTO the Mint, then back INTO prison, wait out their sentences, and pick up the cash when they're released. The big soccer final gives them a perfect opportunity, as the guards' eyes will all be glued to the TV, and only occasionally to the security monitors. So a film loop of the convicts milling around the common area will suffice for their cover. It goes pretty smoothly, even with a last-minute reprieve at the end, and they make it back in time.   But of course, The Guilty Must Suffer, so when they go for the money after they're all released, it turns out they used the wrong ink in the printing, and it's faded, rendering the bills worthless. Now one could ask why they had fading ink in the Mint, but that would just confuse things, wouldn't it? It also had a damn fine theme tune.


It wasn't for some time that the film industry decided there were some cases where it was okay to see the caperists get away with it. Maybe they're really doing it as part of a larger benevolent action like The In-Laws, or they're stealing from a bad guy like in The Sting, or in the case of the remake of Ocean's 11, someone whom we've been educated is just Not Nice. The rise of the antihero helped this along, where we're supposed to like the bad guy, so theoretically that helped. One could argue that the desire to see the bad guy win had been there for years - John Dillinger and Bonnie & Clyde were folk-heroes at the time they were in action, on and off the screen. But on the whole, people just like to see people get away with it, especially if, as mentioned, they're stealing from a person or organization that is deemed "bad". Brett Ratner's recent Tower Heist was better than the attention it got, and is worth a look on cable. And while I didn't get a chance to see Robot and Frank, everything I've heard suggests I should.

I've mentioned before how much I look forward to the return of the Gentleman Bandit genre. George Clooney's version of Danny Ocean is very close to that; I've often said I think Will Smith could do a great Raffles. Combined with an outlandish Caper Plot, a new Raffles film could burn up the box office.