This post is part of the CMBA’s Fabulous Films of the 1940s Blogathon, running from February 17th through February 22nd, 2013. Enjoy!

After The Maltese Falcon became a hit in 1941, Warner Bros. wasted no time in following up with Across the Pacific (AtP) in 1942, reuniting its powerhouse stars Humphrey Bogart, Mary Astor, Sydney Greenstreet, composer Adolph Deutsch,  and of course, director John Huston, this time working from a script by Richard Macaulay (They Drive By Night; The Roaring Twenties; Born to Kill), based on the serial Aloha Means Goodbye.  (Macauley was later known for testifying as a “friendly witness” before HUAC during the McCarthy era, but that’s a story for another time.)

AtP has plenty of suspense, romance, and flag-waving, what with the U.S. poised to enter World War 2 any minute.  The result was an entertaining adventure with that cheeky Huston feel, at once suspenseful and playful, while never forgetting that war is on the horizon and you can never be sure who to trust.  Only Peter Lorre was missing among the AtP cast—but he turned up just long enough to horse around, according to TCM’s Bret Wood: “Without informing his cast, Huston had Lorre enter the background as a waiter, clumsily disrupting the scene until announcing his presence with a wet kiss on the back of Astor’s neck.”  Oh, those impish Warner scamps!

Would you believe I first saw AtP in colorized form?  Yes, that was back in the bad old days when Ted Turner thought people would turn up their pert little noses at black-and-white movies.  Instead, the colors looked muddy and just plain awful. Lovely Mary Astor’s lips looked gray—blecch!  Give me glorious black-and-white anytime!

Our story is set in 1941, where our hero Rick Leland (Bogart) is in the very un-heroic position of being dishonorably discharged from the U.S. Army, with woman trouble indicated.  So our antihero Rick comes aboard the Genoa Maru, a ship heading toward Panama; after all, there’s always something a freelance adventurer can do to earn a few bucks!  Rick meets Dr. Lorenz (Greenstreet), an American who seems to be a lot more sympathetic to the Japanese than most of us Yanks would’ve been during that era, being on the brink of war and all.  Another passenger, Joe Totsuiko (Victor Sen Yung, a.k.a. Sen Yung of The Letter; Number Two Son Jimmy Chan in the Charlie Chan movies; and Hop Sing on TV’s Bonanza, among others), is a sharp young Japanese-American who grew up in the U.S., and has almost the same hepcat lingo as Kookie from TV’s 77 Sunset Strip (*snap snap*).  But don’t underestimate his boyish charm and thick glasses; Joe’s jujitsu moves will knock you on your butt!

War or no war, there’s always time for romance, by George!  Rick romances passenger Alberta Marlow (Astor, for whom I’ve always had a soft spot, as she reminds me of my late Auntie Joy), who’s pretty gosh-darn glamorous for an unassuming little lady supposedly from a town called Medicine Hat.  (By the way, there really is a town called Medicine Hat in Alberta, Canada!)  But hey, aren’t cruises supposed to be exciting and romantic?  While I don’t always agree with venerable New York Times film reviewer Bosley Crowther, I do agree with his comment about our leading lady: “Miss Astor is so beautiful a creature that you naturally know you must reserve your trust.”

TCM’s Bret Wood goes on to say: “Once war was declared, it was difficult for the crew to hold onto their Japanese-American actors, who were suddenly considered a threat to security.  According to Astor, ‘a little indignation and some wire-pulling held them at least until the picture was finished.’ The Japanese actors were forced to endure a fair amount of racial stereotyping in the wartime film. Most speak pidgin English, while Victor Sen Yung was required to wear grotesque magnifying spectacles. In spite of this thinly disguised racism, Across the Pacific is in many ways respectful of Asian culture and in several instances attempts a serious understanding of the Japanese character and the philosophy of Judo.”

Our travelers sure do get their share of adventure and intrigue, eventually foiling a dastardly Japanese plot against the Panama Canal (keep in mind this was wartime in the 1940s, well before WW2 ended and the U.S. and Japan became chummy so everyone could make money on electronics and such.)  Happily, we discover Rick really is on the side of the angels; he’s working for amiable spymaster A.V. Smith (Charles Halton of To Be or Not To Be; The Best Years of our Lives; Alfred Hitchcock’s Foreign Correspondent), who’s basically Rick’s spymaster for this mission. (He was gonna be reinstated once his mission was over, wasn’t he? I assume nothing!)  I enjoyed the swell repartee between Rick and Alberta. The dialogue is witty, fast, and peppery. For example:

Alberta: “I can do without money.”
Rick: “Stick with me and you’ll get plenty of practice.”

Rick notices Alberta’s comparatively skimpy cruise garb:
Rick: “I never saw anybody like you. You never have any clothes on.”
Alberta: “Well if anyone heard you complaining about it, they would put you in a psychopathic ward.”  (Note: Alberta’s so-called skimpy sea togs just looked like nice bathrobes and skirts to me, but this was 1942, so Astor’s fashions may well have seemed racy at the time!)

According to the TCM Web site, John Huston and many other Hollywood actors and filmmakers accepted commissions to become a lieutenant in the U.S. Army Signal Corps after the attack on Pearl Harbor.  Huston was called into service just before AtP wrapped.  Vincent Sherman (Mr. Skeffington; The Young Philadelphians; and one of my favorites, All Through the Night) took over.


Huston and his cast work together as beautifully as they did in their previous hit. Astor has always been deft at drama (The Great Lie, for which she won her 1942 Best Supporting Actress Oscar), but she’s also always had a flair for comedy, too (The Palm Beach Story being a delightful example).  Astor and Bogart are an engaging onscreen couple, whether they’re playful or serious.  In one running gag (literally), Astor’s Alberta Marlow makes a prim, hilarious victim of seasickness: “Even if I live, I’ll never be the same again.”  And don’t get her started on the ship’s bread pudding!  The action goes from sea to land, from New York City (where Alberta insists on Rick buying a new suit. Guess she never heard that line from The Spanish Prisoner: “Beware of all enterprises which require new clothes.”), and finally, from Cristobal to Panama where the action gets red hot.  No wonder Crowther had more to say about AtP: “It’s like having a knife to your ribs for an hour and a half.”  That’s in a good way, I assure you! 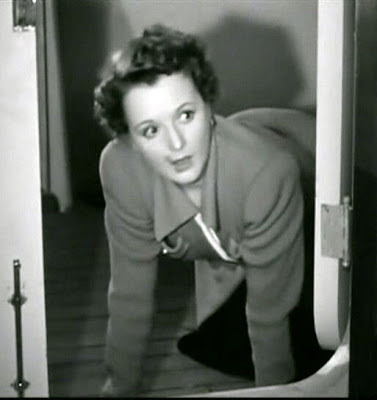 Anyone got a compact?  My lips are delightfully schmeared after all this gunplay! 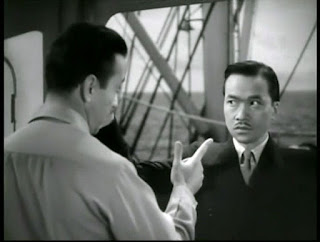