To Have and Have Not: When Bogie Met Baby

It’s funny to think the movie version of To Have and Have Not (TH&HN) came about as a wager between producer/director Howard Hawks and author Ernest Hemingway!   According to TCM’s John Miller, Hawks was trying to persuade his Nobel Prize-winning author pal Hemingway to try screenwriting.  Hemingway balked, saying most of his writing was unfilmable.  Hawks wouldn’t give up that easily, boasting that he could make a good film out of what he considered Hemingway’s worst novel: “That bunch of junk To Have and Have Not.”  From what I’ve heard about “Papa” Hemingway, I would’ve expected those fellas to duke it out at that point, but Hemingway was up to the challenge.  Jules Furthman banged out a screenplay, turning “that bunch of junk” into an exciting, sexy, totally irresistible adventure with what turned out to be one of the best romantic teams in movie history, onscreen and off-screen!

We’ve said this here at TotED before, but we’ll gladly say it again: For our money, there seemed to be no genre that Hawks couldn’t tackle with the greatest of ease, and there’s never been a more perfect romantic team than Humphrey Bogart and Lauren Bacall, the latter becoming Mrs. Bogart in 1945, and staying happy together until Bogart’s death in 1957.  (Damn cancer!)   Admittedly, the kind of perfection I’m talking about has nothing to do with such trifles as linear, crystal-clear plotting.  (Clarity? We don’t need no stinkin’ clarity!)  The elements that made Hawks’ best films so entertaining and unforgettable included charismatic actors in memorable roles, whether they were big stars or character actors; zesty direction; rapid-fire delivery, which inspired the late Robert Altman’s directorial style; and those sleek, smart, bewitching Hawks women, almost all of whom try to seduce the hero to one degree or another.  I know I’ve said this elsewhere, too, and I still mean it: I want to be a Howard Hawks kind of woman when I grow up!

Screenwriter Jules Furthman (from the 1935 version of Mutiny on the Bounty; Nightmare Alley; Rio Bravo) and novelist/screenwriter William Faulkner (The Big Sleep; The Long Hot Summer; Intruder in the Dust) were no slouches in the excitement department when it came to crafting entertaining movies!  Our story starts in: “Martinique in the summer of 1940, shortly after the fall of France.”  Meet Harry Morgan (not to be confused with the co-star of the TV version of M*A*S*H), a rugged fisherman for hire (the ever-awesome Humphrey Bogart of The Big Sleep; Across the Pacific; All Through the Night).  World War 2 is on, and Martinique is Vichy-controlled, so it’s not exactly the most carefree place in the world.  War is Hell indeed!  Harry and his first mate, Horatio (Sir Lancelot), charter fishing boats for tourists.  Harry’s current client, Mr. Johnson (Walter Sande of Don Winslow of the Navy; The Blue Dahlia; Detective Mathews in the Boston Blackie movies), is a handful.

Johnson is an inept fisherman who blames others for his careless and expensive mistakes, as well as being a cheapskate and a whiner.  Right now, he’s complaining about Harry’s longtime friend Eddie (three-time Oscar-winner Walter Brennan from Come and Get It; Kentucky; The Westerner; and the hit 1957 TV series The Real McCoys).  Apparently Eddie’s cheerful blathering is getting on Johnson’s nerves—aw, poor baby, our hearts bleed for you!  Hey, if Harry and Horatio can shrug off Johnson’s whiny personality—not to mention losing the rod and reel due to his ineptitude—he should be able to put up with Eddie’s gabbiness and occasional mistakes (which our hero matter-of-factly sets right).  Eddie can’t help it, though, with his alcoholism:

So since then, Harry has taken Eddie under his wing, looking after Eddie as if he was an addled but endearing old dad.  Harry’s kindness to Eddie endeared me to him right away.  Note that even with Eddie’s issues, he’s still more capable on the boat than bumbling "Blame Game" Johnson, who comes mighty close to getting tossed overboard when Johnson tries to get tough with Eddie (“Are you a good swimmer, Mr. Johnson?”)!  TH&HN has terrific atmosphere, thanks to Charles Novi’s Art Direction, Casey Roberts’ Set Decoration, and Sid Hickcox’ cinematography.

I like the AMC Website’s response to Eddie's recurring Dada-esque question:
“Was you ever bit by a dead bee...a honey bee?”  It’s a perfect Rorschach-style personality character test for every character that crosses Eddie’s path.  Harry, of course, understands Eddie, so they’ve long since passed the “Dead Bee” test with flying colors.  If Eddie’s question triggers confusion, impatience, and/or anger from others, we know these people are, if not full-tilt villains, then at the very least, they’re not Harry’s kind of people (or ours)! “Frenchy” Gerard (Marcel Dalio from Grand Illusion; Sabrina; Gentlemen Prefer Blondes), a member of the French Resistance, offers Harry big bucks to smuggle a good-guy member of the French Resistance out of the country.  Being no fool, Harry sticks his head out for no one.  But then along comes a woman who’s just checked in at Frenchy’s hotel:  the sulky and sultry Marie Browning, played by native New Yorker and model-turned-actress Lauren Bacall in a film debut that puts the “WOW!” in the “Wow Factor”!


Although Marie seems cool, calm, and insolent, she’s actually living by her wits, starting with cozying up to the unsuspecting  Johnson in the café and picking the big boob’s pocket.  Granted, Johnson is getting a little too hands-on with Marie, but Harry isn’t letting her get away with it:  “You ought to pick on someone to steal from who doesn’t owe me money.”  Lucky for Harry, our gal Marie gains Harry’s trust when Johnson gets tripped up by his own lies about being penniless until the next day, when in fact Johnson was all set to hop a plane at dawn!   But no sooner does Johnson begin to sheepishly sign his Traveler's Cheques than gunfire rings out in the café, leaving the joint in a mess and Johnson dead in the crossfire.  As Harry says, “He couldn’t write any faster than he could duck.  Another minute and his cheques would have been good.”  Thanks to that vile Vichy gunfire, both Harry and Marie are in the soup, and we don’t just mean vichyssoise!   Now the slimy Vichy Captain Reynard (Dan Seymour from Key Largo; Johnny Belinda; The Way We Were) and Lt. Coyo (Sheldon Leonard, who went from supporting roles like Another Thin  Man in the movies to becoming a wildly successful TV producer) have Harry and Marie over a barrel.

Harry can tell that Marie’s life hasn’t been a bed of roses, unless you count the thorns; during Reynard’s grilling, Marie takes a slap in the face without batting an eye.  She admits she’s trying to get home to the States: “I’d walk, if it wasn’t for all that water.”  In the great Hawks tradition, Harry and Marie get closer, including cool pet names: “Steve” for Harry, and “Slim” for Marie—which were actually Mrs. and  Mrs. Howard Hawks’ pet names for each other in real life!  The mating dance between “Steve” and “Slim” is tantalizing, yet still yields Harry’s better instincts as he agrees to help Marie get back home in exchange for smuggling Frenchy’s refugee friends. Well, they say that adversity brings people together in hard times, so our heroes have no choice but to help Frenchy and his Resistance allies, and help Marie in the bargain.

French Resistance Fighter Paul deBursac (Walter Szurovy, a.k.a. Walter Molnar) boards Harry’s boat, with a new last-minute passenger:  his wife, Hellene (Dolores Moran from The Ghost Breakers; Old Acquaintance; The Horn Blows at Midnight).  Staying calm and paying attention doesn’t seem to be the deBursacs’ strong suit:  despite Harry’s warnings to just get flat on the deck and stay there, that peacenik Paul shouts out, “Don’t shoot!”  All he gets for his trouble is a bullet in the shoulder, though Harry gets them to land and safety.  When they get back, Harry discovers our gal “Slim” has found a sweet gig as a chanteuse at the café, just goes to show you can’t keep a great gal down!  And not a moment too soon; turns out Frenchy snuck the injured Paul in the cellar so jack-of-all-trades Harry could operate on our little Freedom Fighter in peace—especially when well-meaning but overprotective Mme. deBursac accidentally knocks herself out with the chloroform she was supposed to use to operate on Paul.  Well, at least now we can get Paul healed in peace and quiet!  Boy, Harry can’t seem to get a moment to himself!  He’s tangling with bad guys, beautiful women, French resistance fighters, lovable (albeit needy) alcoholic sidekicks—sheesh, the man can’t seem to get a moment to himself!  He needs a “Do Not Disturb” sign!


It’s been said that Hawks got his nose out of joint for a time because Hawks wanted Bacall all to himself, to no avail.  *Tsk tsk!* No point being greedy, Hawks, especially since he already had a charming and lovely wife at home!  But beautiful Dolores Moran could surely have been a fine runner-up as Mme. deBursac, even if her character  was often more of a hindrance than a help in her well-meaning but overbearing way.  In real life, Dolores Moran had a reputation for going around with well-known married Hollywood heavyweights, as well as supporting parts in The Ghost Breakers; Old Acquaintance; and The Horn Blows at Midnight. 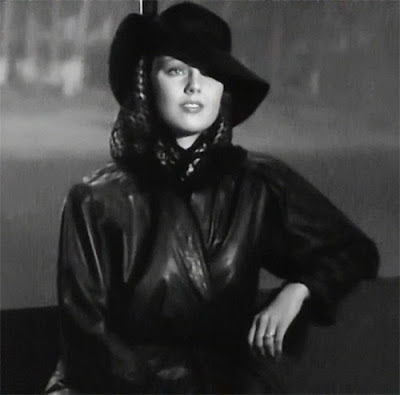 Will the lovely and well-meaning but maddeningly
overprotective Hellene deBursac turn out to be Hell on wheels? 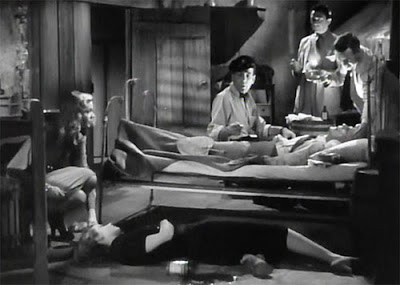 Mme. de Bursac goofs and ends up knocking herself out with Harry’s chloroform.  Thank goodness, we thought that dame would never shut up! 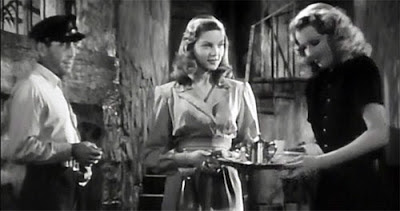 Here’s the complimentary breakfast we give Freedom Fighters in our charming café.  Now scram, toots, and let “Steve” and me catch up on our nookie!

Bacall wasn’t the only one making a film debut in TH&HN; so was Oscar-winning singer/songwriter Hoagy Carmichael (for Here Comes the Groom; Starlight; Gentlemen Prefer Blondes),  playing piano man Cricket at the café.  In fact, the catchy background music at the café makes me wonder if anyone considered making this a Broadway musical.  I’d see it if I had the dough!

Whether Bogart and Bacall are being playful or serious onscreen (or offscreen, for that matter), the sparks between them are hotter than July 4th fireworks—and nobody even had to get naked, at least onscreen!