There is Nothing Like a Dame!  We mean Dame Agatha Christie, of course!  Here in our latest series of blog posts saluting the talented and prolific films based on the novels of  Mrs. Christie, this time we’re watching one of our favorites, Ten Little Indians, the 1965 version (1966 in some posts). Our favorite brother act, The Popkin Brothers,  (Impact; D.O.A.) again produced the film, along with co-producer Harry Alan Towers (who deserves an article or even a book, but that, too, is another story). We’ve watched and enjoyed the 1945 version, And Then There Were None, but this time, Mrs. Christie’s chilling tale gets even more exciting, thanks to screenwriters Peter Yeldham and Towers himself, under the nom de plume “Peter Welbeck”; talk about a man of many faces!

This version has it all:  violence, fisticuffs, hot hunks, and beautiful babes; you’ve got Team Bartilucci’s attention, all right!  This time, the beleaguered house party guests with targets on their backs are jet-setters in the Swiss Alps (played by Ireland; give our regards to Barry Fitzgerald!).  Each guest was lured by invitations, ranging from old friends (O’Brian), movie stars networking, like film star Ilona Bergen (Lavi) and such, invitations supposedly sent from old friends, or promises of hobnobbing  with the promise of more movie and/or TV/film roles roles, like film star Ilona Bergen here to hobnob (Lavi); popular but obnoxious rock singer  Mike Raven (Fabian);  and other devilish ruses to keep our party guests around in hope for more roles and such.  It’s the ultimate house-party gone lethally wrong!  Malcolm Lockyer’s gorgeously brassy musical score heats things up, which will come in handy when the lovely Shirley Eaton and the ruggedly handsome Hugh O’Brian have a super-hot love scene!  (I love that this scene is truly sexy and genuinely loving!)

With all the Currier & Ives-style winter wonderland atmosphere, it’s beginning to look a lot like Christmas — except that nobody knows each other, not even hired secretary Ann Clyde (Eaton).  Leave it to a movie star to break the ice, namely renowned actress Ilona Bergen (Lavi):

“How utterly marvelous!  You all came to a house party without knowing your host!”
Hugh: “Well, what about you, Miss Bergen?”
Ilona: “Darling, it happens to me all the time!” (Oh, those jaded jet-setters!


Our absent host U.N. Owen takes his sweet time showing up; what would Miss Manners say?  Luckily,  Judge Cannon (Hyde-White) has a toast for the occasion:  “To absent friends, the ten little Indians, and of course, our host.”   Keep an eye on your guests, you guys and gals; they might not stay very long, and not just because they’re jet-setters!  Soon a chilling, unknown voice breaks the ice with a series of accusations about the guests and the murders in their pasts.  The unknown "U.N. Owen (gotta hand it to the fiend, he (or she?) sure has a great sense of gallows humor!

Fun Fact:  The mysterious U.N. Owen’s sinister voice was played by the one and only Christopher Lee!

Our stranded guests finally let their fair down and admit their crimes:  General Mandrake sent five men to their deaths to in what turned out to be a tragic blunder, but was decorated anyway; the Grohmanns were accused of a mercy killing by their elderly charges.  Ilona had been a British Army Officer’s wife, bored but sticking with him until she finally got a chance to get a screen test,  then blowing that Popcicle stand and propelling herself to stardom—and when she dumped her sad hubby, he killed himself in despair, the poor guy.  She does seem to have some remorse, though my cynical side has me thinking she was more sorry for herself than anything else.  Mandrake knew all about her because Ilona’s husband had been Mandrake’s superior!  News travels fast in a snowbound Château!   Judge Cannon  had convicted a truly evil man, one Edward Seton, including other wicked things he’d done to save time; there’s multitasking for you!  And then there was Dr. Armstrong, living (but not for long) while he was literally drinking and driving while drunk, resulting in a killing a young couple. And the body count begins...

Ah, but Owen is far from infallible, at least when it comes to our budding lovers Hugh and Ann!   You see, Ann’s disturbed sister had killed her fiancée, and has lived in a mental home ever since.  Hugh had come to the Château because his friend, one Charles Moreley (note the initials “C.S”), had been had killed himself after in remorse after being responsible for a young woman’s botched abortion.  Oy!  How will Hugh and Ann get out of this fix? 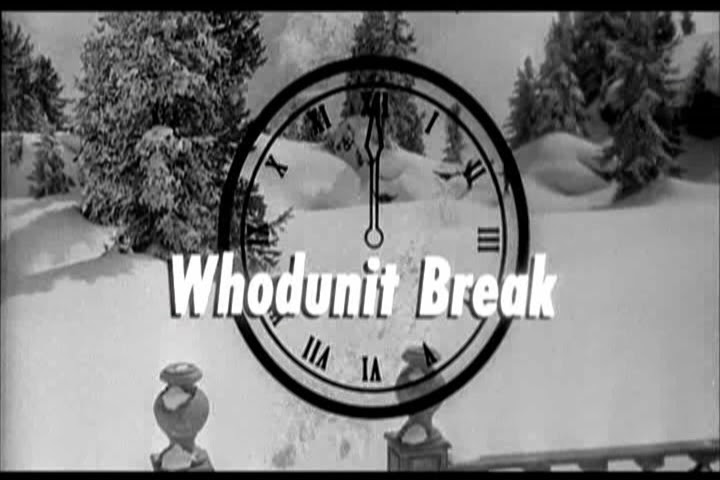 I especially got a kick out of the Whodunit Break to give us viewers one minute to see who the killer is: “The Whodunit Break: “…A First in Motion Pictures!   Just before the gripping climax of the film, you’ll be given sixty seconds to decide to guess the who the murderer is…WE DARE YOU TO GUESS!”

Personally, I’d like to think the great William Castle is watching this in Heaven and grinning from ear to ear!