This post is for the Madeleine Carroll Blogathon, hosted by Tales of the Easily Distracted and Silver Screenings, from February 26th through 27th! Enjoy! 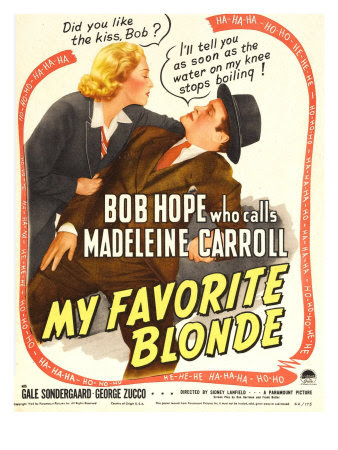 I get a kick out of Bob Hope’s comedy-mysteries from the 1930s and 1940s, including the “Old Dark House” spoof The Cat and the Canary (1939); The Ghost Breakers (1940); and the swell detective spoof My Favorite Brunette (1947). But now I’ve got another favorite for Bob and the girls: My Favorite Blonde (1942), thanks to our great friend and fellow blogger R.A. Kerr (Ruth to us gals on the go!)!

By now, you’ve surely heard of the aristocratic beauty in the Alfred Hitchcock suspense films The 39 Steps (1935); and The Secret Agent (1936) with our gal Maddie (that’s how she was affectionately called by friends and loved ones, so I’m told) as well as the Coming Attractions for her films, as well as on the great Alfred Hitchcock bringing them together when he chose Madeleine as his leading lady in The 39 Steps, as well as Secret Agent (1936), co-starring John Gielgud, this time with Peter Lorre, Lili Palmer, and Robert Young. If you ask me, My Favorite Blonde is a delightful spoof that even our Mr.Hitchcock would get a kick out of!

Lovely Maddie’s next triumph brought her to the U.S, the home of Radio – talk about great word of mouth! To no surprise, Bob Hope found himself smitten by Maddie, and she was flattered at his devotion. Audiences loved it, eating out of fans’ hands. Like any red-blooded American fella in the 1940s, Bob thought Maddie was the bees’ knees’ knees, and with a war on, Maddie was happy to help the war effort. Bob was dazzled by her wit, charm, and beauty. Bob’s crush on Maddie was a big hit with their repartee on the show. Just one little problem: Maddie thought of Bob as just a an admirer and a colleague, while Bob was truly crushing on our gal Maddie. Bob’s long-time wife Dolores was apparently a good sport, but her fiancé, tough-guy Sterling Hayden (Johnny Guitar; The Asphalt Jungle), made no bones about it according to author Lawrence Quirk: “Hayden wanted to show up on the set and rearrange the famed ski-nose!” (Who can blame him?)  Just as well, Bob, you had a swell wife, that’s enough, buster!  (My dear late mom would have agreed, as she was a big Sterling Hayden fan!)!

At the beginning of My Favorite Blonde, we meet our heroine, Karen Bentley (Madeleine Carroll, of course!), a clearly a sophisticated lady indeed, downing a Pousse Café, so cool she can actually show the bartender how to prepare each ring – what a gal! But Karen barely gets time to polish off her off her drink when she sees a seriously wounded man on deck! Turns out she's a spy that would give Peggy Carter a run for her money, and the poor guy turns out to be one of Karen’s good-guy spy colleagues!  He comes to with only enough time to get the "spy info" into her hands - a small scorpion-shaped pin, engraved with coded information for flight plans for a new fleet of warplanes.  Karen has to make tracks before the baddies can catch up to her too!  And believe us, Karen’s foes are no cream-puffs: they’re the evil Madame Stephanie Runick (Oscar-winner Gale Sondergaard; The Letter); and Dr. Streger (George Zucco of After The Thin Man; The Cat and the Canary).

Karen ditches the baddies with a deft swap in a cab, and ducks into the stage door of a vaudeville theater, claiming to want to talk to the members of the first act she sees on the board, "Haines and Percy".  But even though Larry Haines (Bob Hope) has first billing, he's second banana to his partner, a trained roller-skating penguin! He's heading for The Coast that night for what he claims is a big movie deal (in fact it's Percy who has the offer), but as soon as Karen hears about his plans, she demands to hitch a ride with him, demanding he ask no questions.  She's so cute he can't say no, so when they start on their journey, he's got no idea why she starts jumping into mad characters and accents when she spies (sorry) one of Gayle's Goons lurking nearby.  Grabbing him for an attention diverting kiss one moment and pushing him away the next, Larry exasperatedly asks, “Say, what do operate on, alternating current?”

Larry spends a good portion of the film dazed and confused -- it's not till they reach what's supposed the end of their mission in Chicago does he learn what's really going on, just in time to get properly terrified!  The agent they were supposed to drop the McGuffin off with has been gotten to first - he's got a knife in his back, and the place is surrounded.

Karen: “They have access to the building. You’ll never get out of this building alive!”
Larry: Lady, if I'm not out of that door in 2 seconds flat, my name's not Larry Haines!
(Villain throws knife, missing Larry by a hair.) Larry turns back: “Meet John Doe!”

Larry goes for a classic gag to get a police escort to safety -- they stage a "domestic dispute" that would put the Bickersons to shame, and as soon as they're out of danger, they start "making up" in the back of the police car so cloyingly that the cops boot them out.  Of course, by that time they've found the dead spy in the apartment, and they're blamed for the murder, which only makes the trip to California all the more harrowing! Our heroes also get some swell noir-style imagery in a dark chase scene, but there’s still plenty of cameos in the Teamster picnic, where Karen and Larry face it: they’re addicted to love! But that doesn’t mean there’s still lots of hilarity – not when Carl Switzer, a.k.a Alfalfa, brings pandemonium to a women’s conference, spitting with wild abandon!

There's a couple of references to Carroll's The 39 Steps as well - Bob has to give an impromptu speech as they hide from the Nazis, and earlier on, he talks about a mysterious man with "only two fingers on one hand" (and he don't mean Harold Lloyd!)

Also keep an eyes peeled as they try to get lost in a Chicago crowd; that’s Bing Crosby in a cameo in a hilarious scene where Karen and Larry find themselves at a Teamsters picnic, where Irish eyes are both laughing and fighting! Call me a softy, but I was touched by the blend of zany comedy and tenderness, especially in the love scene in the box car. Might as well face it, you crazy kids, you’re added to love!   And watch for the mortuary scene – you might die laughing!