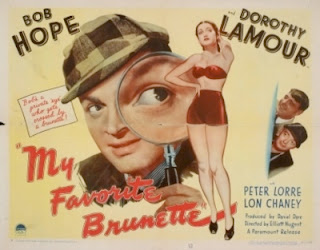 Somewhere along the way, MFB slipped out of Paramount Pictures’ hands and wound up in Public Domain Hell!  The Madacy DVD currently available doesn't have the most pristine print; it’s got more scratches than a nudist who stumbled into poison ivy. Nevertheless, my scratchy copy of MFB is still a far better copy than the one that Turner Classic Movies periodically runs!  Heck, the TCM print is actually missing a few minutes in the scene taking place just after the rained-upon Ronnie and Carlotta return to McCloud’s office. I noticed the Columbia Pictures Television logo at the end of TCM’s recent MFB broadcast. Right now the best copy available is part of a three disc set, The Bob Hope Collection, which also features two of the Road pictures (Rio and Bali), and The Lemon Drop Kid.