Sir Alfred Hitchcock was truly one of a kind, a director/producer/ showman. When you sat down to enjoy Hitchcock’s movies and his TV anthology series Alfred Hitchcock Presents, you knew what delights lay in store:
And boy, did fellow filmmakers do their darndest to hop on the Hitchcock bandwagon! How many times have you watched a movie that was clearly saluting the man known as “The Master of Suspense”? Filmmakers from Brian DePalma to D.J. Caruso and so many more have aimed for a Hitchcockian feel in their thrillers—and goshdarnit, some of them actually did an amazingly good job of bowing to The Master! So this summer, from July 7th through July 12th, we’re celebrating filmmakers who love Hitchcock and more specifically, the upcoming 84th birthday of one of our favorite character actress/producers, Patricia Hitchcock, who graced her dad’s films in Stage Fright, Strangers on a Train, and Psycho, as well as many episodes of TV’s Alfred Hitchcock Presents.

And so a new Blogathon is born: 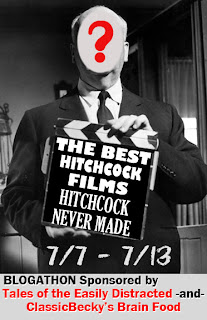 The Best Hitchcock Movies (That Hitchcock Never Made)
July 7th to July 13th, 2012

This wouldn’t be strictly a CMBA blogathon, but simply a fun, casual blogathon open to all who love Hitchcockian (as opposed to just Hitchcock) movies, and wish to participate.
Again, the idea is to not review Alfred's own films, but those that have a Hitchcockian feeling and Hitchcockian elements in them.  For example, North by Northwest shares a lot of themes with The Prize (1963), Psycho surely inspired DePalma's Dressed to Kill (1980) not to mention more than a couple more. A film doesn't have to be based on or inspired by any particular AH film, either: Charade (1963) and Arabesque (1966) certainly have the freewheeling terror that a great Hitchcock film does.

Well, you get the idea! And that’s where we come in as your genial hostesses and pals:
Dorian Tenore-Bartilucci, a.k.a. DorianTB of Tales of the Easily Distracted
Rebecca Barnes, a.k.a. Becky of ClassicBecky’s Brain Food

While we won't keep people from doing the same films, we will let everyone know what films have been "taken" on this page, so you can keep track.

If you have any questions of suggestions, we’re all ears! Looking forward to enjoying The Best Hitchcock Movies (That Hitchcock Never Made) in this fun-filled, sun-filled summer!