Part 2 of 2 - Movies That Need Remaking: How STILL OF THE NIGHT Could Have Been a Quality Hitchcock Pastiche 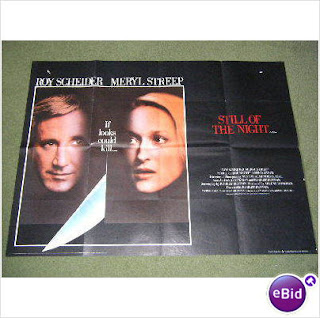 The maddening thing about Still of the Night (SotN) is that there were so many things director/co-writer Robert Benton and company could have done to make SotN a truly exceptional thriller as well as an affectionate salute to Alfred Hitchcock. If by some bizarre twist of fate, some producer gave me unlimited money and resources to remake SotN as the sleek, suspenseful thriller it could have been, here are the changes I’d make:

1.)    More emotion, please! What SotN desperately needs is more warmth, urgency, wit, passion—in short, more emotion! The cast tries hard, but the combination of aloof direction and a script with more emphasis on set pieces than characterization leaves them (and the audience) cold as a corpse in the Antarctic. Even the Spartan art direction, with its muted color scheme of blues and the occasional earth tone, adds a distinct chill to the emotional climate; more about that shortly.

2.)    Fill in those plot holes! For instance, I know Con Edison bills are high in NYC, but doesn’t anyone in this movie ever turn on their lights? How did Gail Phillips (Sara Botsford) get from to so darn fast? (Was North by Northwest’s Roger Thornhill driving?) Speaking of , would a fiercely private person like the enigmatic, easily spooked Brooke Reynolds (Meryl Streep) really have a big sign outside her house with her last name on it for all to see? For that matter, would she allow her name to be listed in the Manhattan White Pages, where Sam finds out her address? Which brings us to….

3.)    Fewer “idiot plot” devices, please! Most of SotN’s “idiot plot” devices (as coined by Roger Ebert and Gene Siskel back in the day) involve our love-struck hero Dr. Sam Rice. Since Sam was played by Roy Scheider—who I’d always liked because he came across as tough, suave, sensitive and sensible all at once—the actions the script required of him seemed that much sillier. The things Sam must do simply because it’s in the script include sitting alone in a dim, creepy basement laundry room when a killer’s on the loose (with the lights going out to boot); sneaking into Brooke’s office during the auction (“This is dumb,” Sam mutters to himself. No argument from me!); and after dark, following a woman across the street who he thinks might be Brooke, never mind that the distance and her scarf render her unrecognizable. But Sam has to follow this mystery woman despite his better judgment so he can tail her to , so his coat can be stolen, so the mugger can wear it, so the killer can kill the mugger thinking he’s Sam…c’mon, that’s just lazy writing! And many of these idiot plot devices wouldn’t have been necessary if the script had…. 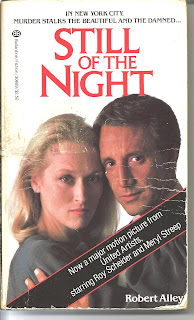 4.)    More scenes with Sam and Brooke together, deepening their emotional bond and adding some much-needed romantic sizzle. Whenever Hitchcock made a romantic thriller in which one of the lovers seemed to be up to no good, among them The Lodger, Spellbound, Suspicion, Notorious, and North by Northwest, he made sure he threw the lovers together at every opportunity, leaving audiences titillated and terrified at the same time. Until SotN’s denouement, the so-called romantic leads are in surprisingly few scenes together, only kissing two or three times, tops.

For crying out loud, Sam and Brooke don’t even have a real date over the course of the film. The auction doesn’t count, as Brooke is working and thus separated from Sam. A friend scored me the novelization of SotN, and there was actually more romance and sex between Sam and Brooke in the book than in the movie; they should have filmed that! If I was in charge of a remake, I’d give the lovebirds more “getting to know you” time. For example, we find out Sam once wanted to be a Major League baseball player. How about a scene with him taking Brooke to a ball game? Let’s have fun with this; maybe Sam and his therapist pals play ball every weekend in . It’d be a great opportunity for humor (Brooke had a privileged upbringing; maybe she could call on her polo skills) and revealing banter as our protagonists get more comfortable with each other. Another opportunity for suspense: someone (Gail?) could follow Sam and Brooke after the game. Maybe Brooke panics when she sees something that reminds her of being nearly murdered by her dad, such as . A little heartfelt yet tastefully-rendered sex couldn’t hurt, and I don’t mean Sam’s comfy psychiatrist couch. One evening, Sam could sub for Brooke’s masseur, one thing can lead to another….

5.)    Better foreshadowing! If Benton and Newman had their hearts set on Gail being the killer, they should have given her more scenes and therefore more foreshadowing. Make Gail a three-dimensional character, not just a plot convenience. Drop more hints about Gail’s relationship with that cad Bynum, since it turns out that philandering Bynum had dumped Gail for Brooke, setting jealous Gail off on her murder spree. Why don’t male filmmakers think women can handle broken romances without turning violent? Anyway, Gail and Brooke could be out on their lunch break on payday and run into Sam, who’d accompany Brooke to the bank while “Greenbacks” declines; psychiatrist Sam could offer to cure her bank phobia. Gail could even run into our happy couple on the street and chat, maybe after following them in the park: “Oh, I was just on my way from lunch at the Boathouse, and I couldn’t help noticing your exciting ball game…” 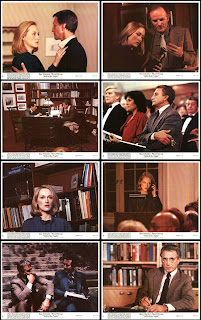 6.)    Hell yes, we want Jess! Benton and company should have given the indomitable Jessica Tandy more screen time. SotN’s coldness thaws beautifully every time Tandy is onscreen. I would have loved to see Tandy and Streep share a scene or two; think of the give-and-take in Spellbound with loving but worried psychiatrist heroine Ingrid Bergman, her kindly old mentor Michael Chekhov, and tormented amnesiac hottie Gregory Peck.

7.)    A little less conversation, a few more visuals! Remember that long monologue wherein we learn Brooke’s shattering secret? Meryl Streep’s intense emoting was superb as always, but since film is a visual medium, this scene still cried out for more visual interest. (Granted, the sight of the luminous young Streep might be enough visual interest for fans.) In the film, it’s just Streep standing against the starless night sky, smoking, crying, and occasionally gesturing. If Streep’s monologue was indeed the result of a new last-minute ending as mentioned in Part 1, that would explain it. If I could remake SotN, I’d opt for a new scene, maybe even a suspenseful flashback or prologue, that would show—not just tell—what happened in . Brooke’s big speech might even be kept in the scene as a voiceover.  More foreshadowing throughout the film would give this part of the plot more momentum and impact. For instance, let’s see those pictures of young Brooke (a.k.a. the little girl in Bynum’s dream) and her family at various points in SotN. Maybe Sam could see them during a little tête-à-tête at Brooke’s place in one of those hot new romantic scenes from Suggestion #4.

8.)    Color SotN’s world! Speaking of visual interest, the usually capable Mel Bourne could have dressed up his sets a bit. No one in SotN seems to have heard of primary or pastel colors. Okay, Streep wore a dark blue dress toward the end of the movie, but that’s about it. Even the occasional bloodstains are invariably seen in dim light, so they could have used chocolate sauce a la Psycho for all I know. Were these dark colors intended to show off Streep’s shiny Hitchcock blonde tresses? Benton and company used similarly stark art direction in Kramer Vs. Kramer (except for the pastel sky in young Justin Henry’s bedroom), which helped dry out some of that sentimental tale’s overly soap-opera-ish elements. But if you’re aiming to emulate Hitchcock, you’ve got to go for his visual sense as well, and he usually provided plenty of eye appeal with handsome and colorful sets, costumes, and locations, except in his glorious black-and-white films, of course.

9.)  Lighten up, Meryl! To be fair, it’s hard to tell how much of leading lady Meryl Streep’s jumpiness could be attributed to her character Brooke Reynolds, Streep’s acting style, or Robert Benton’s direction. I wouldn’t be surprised if the most likely culprit was Benton and Newman’s script; Bynum has a line about how *ahem* “tense” Brooke is, and Sam wonders about it himself. Or maybe it is all those cigarettes. But seriously, the end result is that Brooke comes across as so afraid of her own shadow that she not only gets on one’s nerves, but any mystery buff worth his/her hemlock knows she can’t possibly be the killer; she’s just too obvious a suspect. It’s a relief when she finally smiles!
Yes, I know I should probably be using all this time, space, and ink to write more of my own stories instead of going into all this detail about a 28-year-old movie (I’m editing my first novel now). It’s just that I hate to see a project with such potential turn out so disappointingly. Even as is, SotN has enough glimmers of gold (hard to see through all those dark colors and dim lighting, but they’re there) to put a little ache in my thriller-loving heart. Well, who knows, maybe there really is some parallel universe where The Beatles filmed Joe Orton’s Up Against It, Winona Ryder played Mary Corleone in The Godfather: Part III…and Still of the Night turned out to be a crackerjack romantic suspenser after all. Anyone got a time machine they’re not using? I’ll bring it back in one piece, I promise!

For the record, if a SotN remake was green-lit today and I was in charge, I’d cast Adrien Brody as Sam, Nicole Kidman as Brooke, and as a tip of the hat, Meryl Streep as Grace. Any fun dream-casting choices you’d like to share? Don’t be shy!