The article I’d promised about remaking bad movies into good ones will be ready soon. But first, I’m eager to recommend director Daniel Raim's new film, Something's Gonna Live, a superb documentary which anyone who loves movies from Hollywood’s golden age must see, including the fans of a certain Mr. Hitchcock.

However, before we discuss Something’s Gonna Live, we should start at the beginning with The Man on Lincoln's Nose (TMoLN), Raim's 2000 Oscar-nominated Documentary, Short Subject. You know someone is special when the “worst” thing anybody can say about him is that “He has no ego.” That’s what veteran storyboard artist Harold Michelson affectionately says about his friend and colleague, veteran production designer Robert F. Boyle. This 40-minute documentary is as fond and upbeat as it is riveting. Boyle and his comrades share their stories and techniques for building onscreen intrigue, including characterization and “the penultimate moment” versus the endless series of exhausting rock ’em-sock ’em action climaxes that too many films depend on nowadays. We meet Japanese-American art director Albert Nozaki, who was forced into the Manzanar internment camp for six months by the U.S. Government after the attack on Pearl Harbor, in one of the most shameful chapters of U.S. history. On a more positive note, Boyle and his friends also treat us movie mavens to sketches, collages, and footage of their decades of work, among them the original Thomas Crown Affair, Fiddler on the Roof, and of course, classic Alfred Hitchcock films such as Saboteur and my own all-time favorite, North by Northwest. Raim and company cleverly use storyboards and pictures to bring production designers’ work to life for us viewers. 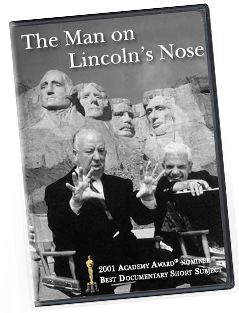 Raim could have stopped with that superb short subject, but happily, he didn’t. The creative geniuses in TMoLN had more to say, and Raim’s moving, exhilarating new documentary Something’s Gonna Live (SGL) gives them the showcase they deserve. Ten years in the making, SGL is well worth the time that Raim and company put into it. SGL sets its tone perfectly with this opening line from Haskell Wexler, one of SGL’s many legendary Oscar-winners and nominees behind countless classic movies:

If you’re gonna spend your time doing the best you can doing shit, then why do it? If you were to spend your time giving to future generations some of the benefits of your knowledge, maybe that’s a way of having a legacy. That’s a way of having a kind of morality so that Bob Boyle’s never gonna die, and I’m not gonna die, and something’s gonna live, and I think that’s a pretty valuable thing.

With the emphasis so many modern filmmakers place on dazzling moviegoers with CGI and pyrotechnics, it’s easy to forget the talented people who’ve always worked behind the scenes, creating movie magic with techniques predating our current digital age. The film is bursting with absorbing, entertaining anecdotes about the golden age of filmmaking, including appearances by Wexler, Michelson, and director of photography Conrad L. Hall. As if the presence of these greats didn’t already guarantee that SGL is a must-see for film lovers, Raim focuses most keenly on three longtime friends and colleagues at the twilight of their lives: Bob Boyle, Al Nozaki, and art director Henry Bumstead, a.k.a. “Bummy.” Of the three, I’d say Al had the most crosses to bear; as if his unfair incarceration at Manzanar wasn’t bad enough, he also had to contend with retinitis pigmentosa slowly stealing his eyesight. I found myself in awe of Al’s incredible grace and fortitude under the circumstances.


“I think everybody’s here by accident. At any moment, anybody could get cancelled. Then there are all those things that we do to ourselves. In my case, I overindulged in almost everything. I smoked too much, I drank too much, I lived too long.”

Nevertheless, onscreen, the trio’s increasing physical frailty doesn’t slow down their sharp minds. These men are just as witty, smart, and on the ball as any young hotshots. I especially liked Bummy’s quips about film sets that don’t look lived-in enough. No doubt their love of their professions kept them young in mind and spirit over the years—proof of the importance of spending your life doing what you truly love, if you’re lucky!

I must say the gents were pretty darn dashing, too, wearing suits and ties on the sets of The Birds and North by Northwest. There’s a particularly nice photo of Bob, Harold, and visual effects whiz Albert Whitlock, no slouch in the dashing department either. As a Hitchcock fan, I especially enjoyed these particular anecdotes, including Bob’s theory that if Hitchcock was alive and making movies today, he’d happily use the current digital technology as long as it truly served the story’s purposes. Bob and Harold’s return to Bodega Bay after 37 years was one of the film’s highlights. Bob, Bummy, and Al joke about being “three old farts,” three old bastards” and “three tottering people,” but Bob got it right when he described them all as “three old soldiers.”

Raim caught the friends on film just in time; sadly, 91-year-old Bummy died in 2006; Al died at the same age in 2003; and Bob died this past August at the milestone age of 100. Still, I felt like I’d had a chance to be part of their outfit for 80 minutes; it was a pleasure and a privilege to get a look at these men’s exciting, meaningful lives being truly lived to the fullest.

SGL is like a fond, wistful, yet buoyant time machine voyage, deserving a place on the must-see list of anyone who loves movies inside and out. It’s a thoroughly entertaining yet heartfelt documentary with much to say about the art, heart, and soul of filmmaking, as well as the duration of friendships, the passage of time, the team effort required in such endeavors, and the legacies that all talented people inevitably leave to enrich generations of creative artists to come. I, for one, am pulling for SGL to achieve the widespread success it deserves!

Both Something's Gonna Live and The Man on Lincoln's Nose are now available on DVD through Adama Films, so if you love filmmaking, you owe it to yourself to add it to your film collection! (http://www.lincolnsnose.com/) (http://somethingsgonnalive.com/ )