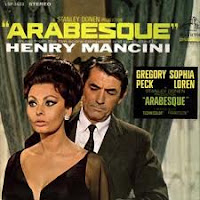 This post has been revised and republished  as part of the My Love of Old Hollywood Horseathon, hosted by Page, from May 25 through May 28, 2012. Saddle up, y'all!


After Stanley Donen’s Hitchcockian romantic comedy-thriller Charade (1963) became a smash hit, Donen had a decision to make: play it safe and make another film just like it (this was in the days before filmmakers sequel-ed popular films to death, lazily giving them titles like Hit Movie Part 2), or boldly go where he hadn’t gone before? Donen opted for a little of both with Arabesque (1966). Arabesque has just about everything a moviegoer could want in a fun escapist movie: spine-tingling suspense; international intrigue; delightful onscreen romantic chemistry between Oscar-winners Gregory Peck and Sophia Loren (though the Oscars they won weren't for Arabesque; Peck won his Best Actor Oscar for To Kill a Mockingbird in 1962, while Loren had won her Best Actress Oscar the previous year for Two Women); witty dialogue and sight gags; eye-catching English locations; jazzy Henry Mancini music with autoharps and mandolas providing exotic Middle Eastern-sounding motifs; inventive visuals with a pop art vibe; and the beguiling Sophia in fabulous Christian Dior frocks and footwear, courtesy of  the scene-stealing villain played by renowned character actor Alan Badel (Day of the Jackal; This Sporting Life; Children of the Damned) as our heroine's foot-fetishist sugar daddy! What’s not to love?

If the delightful Charade was Alfred Hitchcock Lite, then Arabesque is Hitchcock Lite after taking a few classes in James Bond 101, including an opening title sequence by Maurice Binder, who also did the honors for Charade as well as for most of the Bond movies. Gregory Peck plays David Pollack, a hieroglyphics expert and Yank professor at Oxford who finds himself embroiled in Middle Eastern intrigue while decoding the MacGuffin, a cipher (which also happens to be the title of the Gordon Cotler novel which inspired the film, adapted for the silver screen by Julian Mitchell, Stanley Price and Pierre Marton. More about Marton shortly).

Our hero finds himself up against four Arabs who want to know what’s on that cipher:
* Prime Minister Jena (pronounced “Yay-na” and played by Carl Duering), who’s in England on a hush-hush mission;
*Nejim Beshraavi (Badel), the shipping magnate whose ships may be laid up for good if Jena signs a treaty promising to use English and American tankers;
*Yussef Kasim (Kieron Moore of Crack in the World fame, among others), whose penchant for then-hip lingo a la Edd “Kookie” Byrnes on 77 Sunset Strip belies his ruthlessness;
*And last but far from least, Beshraavi’s
beautiful, unpredictable lover Yasmin Azir, played by the dazzling, hazel-eyed Loren. She’s sharp, witty, and alluring as all get out in her fabulous Dior wardrobe, including a beaded golden burnoose!

John Merivale, the character actor who put the "Adrian Messenger" in The List of Adrian Messenger is memorable as Sloane, Beshraavi’s put-upon henchman, who gets a memorably tense opening scene in a doctor’s office with hapless Dr. Ragheed (George Coulouris of Citizen Kane; Murder on the Orient Express; Papillon) and is treated as a combination lackey and punching bag for the rest of the film. I almost—only almost—felt sorry for the guy. Anyway, some of David’s new associates have no qualms about stooping to murder, and soon the chase is on, with suspenseful scenes at the Hyde Park Zoo, Ascot, and a construction site. Our man David is subjected to truth serum and knockouts, and I don’t just mean the lovely Loren: “Everytime I listen to you, someone either hits me over the head or tries to vaccinate me.” Poor David doesn’t know where to turn, especially since he can never be sure whether he can trust the mercurial Yasmin.

The usual ever-so-slightly wooden note in Gregory Peck’s delivery is oddly effective as he tries to loosen up and deliver witticisms in the breezy style of Cary Grant, Donen’s business partner and original choice to play David Pollack. (Rumor has it Grant and Loren were romantically linked once upon a time; wonder if that’s why Grant didn’t take the role?) It helps that those witticisms were written by none other than
Charade alumnus Peter Stone under the nom de plume Pierre Marton. Peck may not be Mr. Glib, but he’s so inherently likable (he won his Oscar for playing Atticus Finch, after all. Ask Vinnie, my husband, to do his Gregory-Peck-Impersonating-Cary-Grant impersonation sometime!) and seems so delighted to get an opportunity to deliver bon mots after all his serious roles that he’s downright endearing, like a child trying out new words for the first time. Besides, the bewitching Loren can make any guy look suave and sexy. Badel, looking like a swarthy, polished Peter Sellers wearing cool shades, virtually steals his scenes as the suave-bordering-on-unctuous villain with a foot fetish. Shoe lovers will swoon over the scene with Badel outfitting Loren with a roomful of fancy footwear and a comically/suggestively long shoehorn.

Speaking of things of beauty, Christopher Challis’s dazzling, inventive cinematography won him a BAFTA award (the British equivalent of the Oscars), and Christian Dior got a BAFTA nomination for Loren’s elegant costumes. The only thing that disappoints me about Arabesque is that director/producer Donen didn’t seem to like this sparkling, twist-filled adventure as much as our family and so many other movie lovers do. Specifically, he felt the script needed work. In Stephen M. Silverman’s book about Donen’s films, Dancing on the Ceiling, Donen is quoted as saying about Arabesque, “We have to make it so interesting visually that no one will think about it.” Boy, did they ever! In an article about Arabesque on the TCM Web site, Stone had said that Donen “shot it better than he ever shot any picture. Everything was shot as though it were a reflection in a Rolls-Royce headlamp.” I don’t think Donen gave himself or the movie enough credit, though. If you ask me, Arabesque is a perfect example of one of Alfred Hitchcock’s best-known quotes: “Some films are slices of life; mine are slices of cake.” Now that Arabesque is finally available on DVD (my own copy is part of Universal’s Gregory Peck Film Collection, a seven-disc DVD set that Vin bought me for Christmas 2011), I wish someone would get Donen and Loren together to do the kind of entertaining, informative commentary Donen did with the late Stone for Criterion’s special-edition Charade DVD, while they’re both still alive and well enough to swap stories, or perhaps even put out a whole new deluxe edition of the film!