WITNESS FOR THE PROSECUTION: Jury of the Peerless 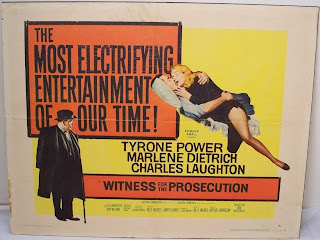 Talk about powerhouse stars! Charles Laughton plays Sir Wilfrid Robarts, a.k.a. “Wilfrid the Fox,” a brilliant veteran barrister who won’t let his cardiac health issues stand in the way of helping a client beat a murder rap riddled with circumstantial evidence. This adds extra suspense during the trial as the audience nervously wonders if Sir Wilfrid will keel over with a heart attack from the strain of it all! Laughton’s real-life wife Elsa Lanchester is a delightful foil for him as his chipper but no-nonsense nurse Miss Plimsoll. Laughton and Lanchester shine in the most engaging performances of their careers, garnering well-deserved Oscar nominations. (WftP also earned nominations for Best Picture, Billy Wilder's direction, Daniel Mandell's editing, and Gordon Sawyer's sound recording, but it was The Bridge on the River Kwai's year.) The comic sparring chemistry between Sir Wilfrid and Miss Plimsoll, and the playful warmth and understanding that's grown between them by movie's end (like the nice little bit at the very end with Sir Wilfrid actually smiling and putting his arm around Miss Plimsoll), had my husband Vinnie opining that if another movie was made featuring these characters, Miss Plimsoll would probably end up as Mrs. Robarts before it was over. What a delightful series that could have been, kind of like a British Thin Man (okay, so Laughton was chubby; it makes him cuddly!) except that Sir Wilfrid would be the eager crime-stopper while Miss Plimsoll would make a show of tut-tutting until she finally went along with Wilfrid the Fox’s schemes, smiling!

Tyrone Power is the client in question, Leonard Vole (look up “Vole” in the dictionary, and you’ll see how devilishly clever the name really is). An unemployed but likable inventor, Leonard’s a real lady-killer, it seems: he’s accused of murdering rich, lonely, aging widow Emily French for her money. Mrs. French is played by one of my favorite character actresses, Norma Varden (of Hitchcock’s Strangers on a Train, among others); Varden and Power work together beautifully in their scenes, portraying Mrs. French’s sweet-natured longing as funny and poignant at the same time.Speaking of beautiful, Marlene Dietrich is absolutely mesmerizing in both looks and acting talent as Leonard’s German war bride Christine, she of the duplicitous tactics, malleable marriage contract, and unshakable alibi against the gobsmacked Leonard!  Is Christine truly the ultimate bitch, or is there more to her agenda? The entertaining flashbacks that Wilder and company deftly weave throughout the film to give it more verve and movement work beautifully, especially in Christine and Leonard’s sexy meet-cute/fall-in-love/dig-those-legs scenes. Dietrich and Power are dynamic in their scenes, whether it’s love or hate or payback time!  It's a shame Dietrich’s brilliant, multifaceted performance wasn't nominated for an Oscar as well, on account of the producers not wanting to spoil a certain crucial surprise twist. Tyrone Power's usual ever-so-slightly wooden delivery actually serves him well as defendant Leonard Vole; somehow it adds to his air of feckless innocence. Veteran character actors Henry Daniell, John Williams, Ian Wolfe, and Torin Thatcher provide able support, too, with original Broadway cast member Una O'Connor stealing her scenes as Mrs. French's loyal Scottish housekeeper Janet MacKenzie, who’s suspicious and “antag’nistic” to the beleaguered Leonard. Sadly, WftP was the last film for both O’Connor and Power before they died within a year of each other, but what a memorable swansong they had.


Maybe it’s a British thing, but I was struck by how people took Sir Wilfrid’s cantankerous side in stride.  It’s a refreshing change from what Vinnie calls “gas-permeable people” whose overly-fragile feelings are crushed by any response that’s less than 100% sweet and sensitive. I love how nobody takes Sir Wilfrid’s cranky pronouncements to heart, including Miss Plimsoll, who gives as good as she gets, like when she reveals she knows all about the cigars hidden in his cane (not to mention the brandy he’s squirreled away).

I promised Vinnie I’d carry on the great tradition of not revealing the stunning surprise ending of WftP.  While you’re at it, don’t blab to your friends, either! I’ll only say I'd have paid good money to see the sequel that the ending implies. The film’s suspenseful surprises were so zealously guarded that when WftP was shown in for a Royal Command Performance, even the Royal Family had to promise beforehand not to reveal the surprise ending to anyone else! Here's the heads-up:


“Notice! To preserve the secret of the surprise ending, patrons are advised NOT to take their seats during the last few minutes of Witness for the Prosecution.” 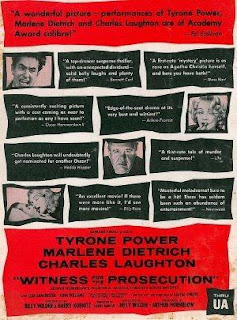 Hear Sir Charles Laughton and Elsa Lanchester in their romantic duet, "Baby, It's Cold Outside"!
Here's the YouTube link:  http://youtu.be/CJ5UIuAa0eM