ALL ABOUT EVE: How Do You Like Those Apples, Eve? 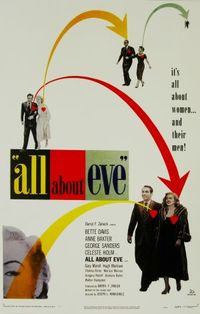 The Antoinette Perry Awards, a.k.a. the Tony Awards, are taking place this coming Sunday, June 12th, 2011 (easy for me to remember, since the Tonys are always awarded sometime around my birthday :-))! What better film to write about this week than All About Eve (AAE)? Writer/director Joseph L. Mankiewicz’s wickedly witty, silkily cynical, sumptuously sophisticated comedy-drama, based on Mary Orr’s story and radio play “The Wisdom of Eve,” is one of the juiciest, most entertaining films about show business ever made. The movie begins with a close-up on an award trophy, described in voice-over by theater critic Addison DeWitt (George Sanders, the King of Suave himself, at his droll, unflappable best in the role he was born to play) as the “highest honor our theater knows: the Sarah Siddons Award for Distinguished Achievement.” By the way, although Sarah Siddons was indeed a much-admired Welsh stage actress, Mankiewicz in fact created the award itself specifically for AAE. Life imitated art in 1952 when a group of eminent Chicago theater-goers began giving notable Chicago actors an award modeled on and named after the one in the film. Need I say that AAE stars Bette Davis and Celeste Holm were eventually among the Sarah Siddons recipients? I wonder why they didn't use the Tony for Eve’s triumph, though? After all, it had been around since 1947. Rights issues, maybe? But I digress….

In flashbacks, we see how well-meaning Karen Richards (Celeste Holm), the wife of Broadway playwright Lloyd Richards (Hugh Marlowe), found young Eve Harrington (Anne Baxter, who’d won a Best Supporting Actress Oscar for 1946’s The Razor's Edge), a down-on-her-luck fan and hopeful ingénue, waiting outside the stage door night after night for a glimpse of her idol, Broadway diva Margo Channing (the one and only Bette Davis). Once Karen brings Eve inside Margo's dressing room after a performance of her current hit play, Aged in Wood, Eve is encouraged to relate her poignant story to them: she was an only child who loved acting and make-believe. She grew up to be a secretary in a Milwaukee brewery who fell in love and married a radio technician named Eddie, only to lose him as a casualty of World War 2. Since then, Eve’s only joy has been going from city to city to watch Margo’s plays from the cheap seats. In today’s stalker-centric age, many folks might find that kinda creepy, but in the innocent early 1950s, who could resist a sweet, lonely, self-deprecating waif who loves the theater so? Almost everyone in the room is moved to tears by Eve’s life story except Margo’s tart-tongued dresser Birdie (Thelma Ritter, one of Team Bartilucci’s faves from Alfred Hitchcock’s Rear Window and so many others), whose assessment comes off as a tad cynical: “What a story! Everything but the bloodhounds snappin’ at her rear end.” But even the jaded Margo is touched by Eve’s poignant tale, taking “the kid” under her wing and into her home as her assistant. Ah, but who’s really being taken in? 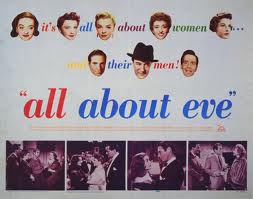 Margo and her Broadway pals shouldn’t have been so quick to scold Birdie. As AAE continues on its merrily jaundiced way, it becomes increasingly clear that fresh-faced ingénue is Eve is more like that tempting snake in the Garden of Eden. As New York Times film critic Bosley Crowther said in his 1950 review, “the self-seeking, ruthless Eve (makes) a black-widow spider look like a lady bug.” Baxter’s subtle transformation from seemingly selfless sweetheart to ruthless predator is magnificent, with that throb in her smoky voice and that figurative stiletto in her dainty hand.

Superb though Baxter is, I must admit I was particularly touched by Davis’s performance as Margo, whose imperiousness and diva demeanor mask her heartbreaking insecurity. Margo’s constantly worried that her lover, director Bill Sampson (played with no-nonsense charm and sympathy by Gary Merrill, who became Davis’s real-life husband for the next ten years), who happens to be eight years Margo’s junior, will leave her for a younger woman. Of course, Eve would be only too happy to fill Margo’s shoes in every aspect of her life! You want to smack Margo one minute for having temper tantrums and making cutting remarks that only make it easier for Eve to slither in with her soothing pseudo-sympathy and forward passes, yet you can’t help wanting to hug and comfort Margo once you remember all the cracks beneath her armor (shown here in a lovely scene where Margo lets her hair down). Davis has her signature delivery and gestures, yet her portrayal of Margo never turns into caricature. By turns, she’s poignant, powerful, and self-deprecatingly witty. Davis had always claimed she based her portrayal on the great Tallulah Bankhead, but I strongly suspect there’s plenty of Davis herself in there, too, and it works beautifully. Oh, and that actress playing stage hopeful Miss Caswell from “The Copacabana School of Dramatic Arts” who was reluctant to call the party waiter “butler…somebody’s name might be ‘Butler’” was quite the scene-stealer, too. Maybe you’ve heard of her—a cute blonde starlet named Marilyn Monroe? According to the IMDb, audiences got a taste of budding star Monroe in several films that year: AAE, The Asphalt Jungle, A Ticket to Tomahawk, Right Cross, and The Fireball—busy gal, and rightly so! 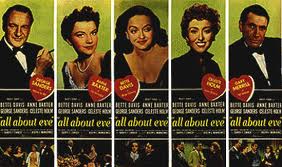 Watching AAE multiple times is just as fun as watching the film for the first time, if not more so! Once you’re onto Eve, AAE is like watching one of Alfred Hitchcock’s wittier thrillers, with a soupcon of Barbet Schroeder’s 1992 suspenser Single White Female. We see the calculated scheming hiding behind Eve’s gimlet eyes while those poor jaded theater folk are lulled into trusting this alleged innocent. Once we viewers realize the truth about Eve, we want to yell warnings to Margo: “Run, Margo! The little bitch is trying to kill your career, not to mention your happiness!” Wow, Hitchcock’s Stage Fright should have been like this!

Every character in this scintillating Broadway satire gets a chance to shine and a kick in the ego to one degree or another. Each line of dialogue sparkles, including Davis’s immortal “Fasten your seat belts, it’s going to be a bumpy night!” In fact, it’s another one of those great movies in which writing down all of the stars’ best lines would result in me transcribing pretty much the whole damn script! AAE won six out of its record-setting 14 Oscar nominations, including Best Picture, Best Costume Design for the ever-awesome Edith Head (black-and-white division), Best Director and Best Screenplay for Mankiewicz, Best Sound, and last but far from least, Best Supporting Actor for George Sanders. (Fun Fact: The all-time Best Picture Oscar-nominee runners-up to date are 1939’s Gone with the Wind and 1953’s From Here to Eternity with 13 nominations each.)

I only wish everyone else nominated for acting awards in the film could have won, too, even if it would’ve meant ties for Best Actress nominees Davis and Baxter as well as Best Supporting Actress nominees Thelma Ritter and Celeste Holm. The Academy ought to institute some kind of Best Ensemble Cast Oscar, like they have at the Screen Actors Guild awards. To be fair, I can’t complain about the wonderful actors who did win: Best Actress Judy Holliday for Born Yesterday, and Best Supporting Actress Josephine Hull for Harvey. Tough choices that year, with other worthy Oscar nominees including Sunset Blvd., The Third Man, Adam’s Rib, Father of the Bride, and King Solomon’s Mines; we need more Oscar years like that! 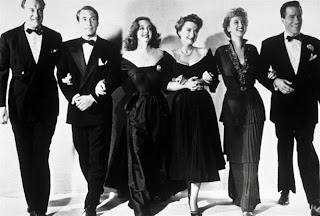