There’s Something About LAURA


Welcome to the House of Spoilers! Enter at your own risk!


Private investigator Sam Marlow: “Dana Andrews was swell in Laura, but what if Bogart had played Lt. McPherson? Yeah, Bogart... smoking a cigarette and looking up at that portrait, thinking Laura was dead, but still in love with her. What a love scene. And neither of them naked!”
The Man with Bogart’s Face by Andrew J. Fenady 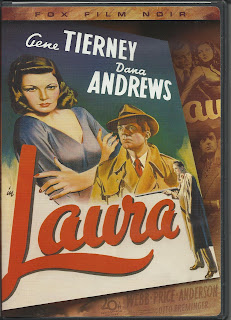 When Vera Caspary’s romantic suspense tale Ring Twice for Laura proved to be a popular serial in Colliers in 1942, Houghton Mifflin published the serial as a best-selling novel, now simply titled Laura.  In 1944, the movie version of Laura hit the silver screen, fated to be movie bait against all odds (more about that in a moment)!  The film and David Raksin's haunting theme song were so popular, they were affectionately parodied with much gusto in many ways, including a spoof by no less than Spike Jones and his City Slickers, an honor akin to Weird Al Yankovic's song parodies (much beloved here at Team Bartilucci H.Q.).

The film starts off on an appropriately ominous note with the voiceover, “I shall never forget the weekend Laura died.” These are the words of Waldo Lydecker, a waspish New York columnist (blogs hadn't been invented yet :-)), played by scene-stealing former silent film actor/ballroom dancer/stage actor Clifton Webb in the role that made him a full-fledged movie star and Oscar nominee. In case you had any silly notions that Waldo was the shy retiring type, he allows Detective Lt. Mark McPherson (Dana Andrews) of the NYPD to grill him as he sits in the bathtub of his opulent bathroom. (Perhaps Waldo hoped Mark might want to take a dip in the tub himself, the old slyboots!) Waldo multitasks, typing one of his devastatingly sharp columns on a tray in his bathtub while answering Mark’s questions about lovely, smart advertising executive-turned-murder victim Laura Hunt (Gene Tierney), found violently killed with a double-barreled shotgun blast at close range
.

But by all accounts, to know Laura was to love her, and why not? Even her maid Bessie (the uncredited but memorable Dorothy Adams) adored Laura, not only “on account of the thousand sweet things she done for me; it was because she was so sweet herself!” Laura was as winsome as she was beautiful; sophisticated, yet hard-working and down-to-earth.  Who’d want to kill her? Someone who loved her too much, perhaps? Maybe Waldo, her longtime mentor and friend? Or could it be Shelby Carpenter (Vincent Price, then best known as a stage actor; his great horror films came later), Laura’s fiancé and colleague at the advertising firm Bullitt & Company (how eerily appropriate, considering how she died), who Waldo sneeringly characterizes (not unfairly) as “a male beauty in distress”? Mark’s investigation brings him into Laura’s glamorous world, and quickly discovers it’s also a world of ambition and danger, obsession and desire. In spite of himself, tough detective Mark realizes he’s getting so deep into the case that he’s falling in love with Laura—her portrait, anyway, all that’s left of her. Or is it? When Mark falls asleep while on stakeout in Laura’s apartment, he’s awakened by Laura herself! But if the shocked, bewildered Laura isn’t dead, then who is? (Fun Fact: The famous portrait of Laura was originally painted by the wife of Rouben Mamoulian, who’d been chosen to direct before producer Otto Preminger opted to direct as well. The portrait was touched up to make it look more like an actual painting of Tierney.)

It turns out the murder victim was Bullitt & Company model Diane Redfern, who dropped by Laura’s apartment for a heart-to-heart with Shelby while our heroine was away in the country trying to thaw out the cold feet she’s developing about marrying him. I don’t blame her, considering Shelby was apparently two-timing Laura (in his Southern-gentleman way, the rake!), as well as the ever-awesome Dame Judith Anderson as Laura’s aunt, Ann Treadwell (Susan Treadwell in the novel). Ann may or may not have an agenda of her own, considering she’s only too happy to “lend” Shelby large sums of money at the drop of her stylish hat, and she can obviously afford him. I guess that’s what happens when you know too many good-looking layabouts with too much time on their hands—get a job, you moochers! But now that Laura’s not dead after all, the police consider her a suspect in Diane’s murder!  Can Mark get the real culprit, as Waldo would say, “trundled off to the hoosegow” before it’s too late? Come to think of it, why is Waldo so eager to get his grandfather clock back ASAP? Funny how it’s just the right size to hide a double-barreled shotgun….

It amazes me that nobody wanted to make this witty, suave, suspenseful adaptation of Caspary’s classic mystery novel! Even when it got the green light, it was initially slated to be a throwaway “B” picture for 20th Century-Fox. I’m also flabbergasted to hear that the bewitching Gene Tierney, who had the amazing ability to be at once approachable and exotic, wasn’t the first choice to play the title role; Jennifer Jones and Hedy Lamarr both turned it down. Their loss! It just goes to show what the right polish and the right talent can do, with Tierney and tough-yet-tender Andrews up against that fabulous cast. Like Witness for the Prosecution and other favorite films of mine, discovering who really dunnit doesn’t spoil the fun of watching Laura again and again, especially with those beautiful clothes, the Oscar-nominated set design/decoration, and of course, listening to composer David Raksin’s rapturous music (which also deserved an Oscar nod, if you ask me)! Indeed, if you pay closer attention to real killer Waldo on a second viewing, you’ll catch more of the clues to his true nature that you were having too much fun to notice the first time around. For example, during Waldo’s flashback-laden dinner conversation with Mark about Laura, you suddenly realize how truly obsessed and self-centered Waldo really is. Note that everything he says about Laura really ends up being more about him than about her: “She deferred to my tastes...the way she listened (to me) was more eloquent than speech….”
As Waldo, acid-tongued Webb’s bon mots are so delightful you want to commit them to memory. He steals the show with his viciously witty lines—and just as important, the angry heartache underlying them. (He does this to superb effect in The Dark Corner, too.) If I start quoting Webb’s best lines, I’ll be transcribing almost every word out of his mouth! Still, the great nest-of-vipers cast hits all the right notes in Preminger’s spellbinding adaptation of Caspary’s novel. The book told the tale from the respective perspectives of Waldo, Shelby, Mark, and eventually Laura herself. In the movie, like in all the best book-to-film adaptations, Laura stays faithful to the novel while keeping it tight to fit the movie’s sleek 87-minute running time—89 minutes in the restored version on DVD, with Waldo narrating over a montage of Laura being made over into a society glamor girl. Supposedly, that footage stayed out of the film for years because the studio was afraid the sequence’s allegedly “decadent” focus on luxury wouldn’t sit well with 1944’s wartime audiences, who were doing without many things they’d once taken for granted. (Suddenly I’m imagining Laura and Waldo double-dating with Vertigo’s Scottie Ferguson and Judy Barton after Judy gets Madeleine Elster’ed!) Webb, Price, and Anderson make wonderful wolves-in-chic-clothing among Laura’s circle of friends and hangers-on. Andrews and Tierney’s chemistry sends sparks flying even before they actually share the screen after the Act 2 twist. Tierney is quite convincing as a sophisticated yet soft-hearted young woman whose kindness almost does her in; as Andrews aptly points out, “For a charming, intelligent girl, you’ve certainly surrounded yourself with a remarkable collection of dopes.”  Amen to that! On a related note, this might sound odd, but I’ve often felt that Laura is almost a dark precursor to the 1998 modern comedy classic There’s Something About Mary! Think about it: both films are about magnetic women who don’t realize how much their looks and charm drive men mad, sometimes literally.

Laura was nominated for five Academy Awards, including Best Director for Preminger; Best Supporting Actor for Webb; Best Adapted Screenplay by Jay Dratler, Samuel Hoffenstein, and Betty Reinhardt, with an uncredited assist by Ring Lardner Jr.; and Best Interior Decoration.  But it was Director of Photography Joseph LaShelle who went home with an Oscar for his atmospheric black-and-white camerawork. Incidentally, Tierney and Webb were reunited in The Razor’s Edge (1946), for which Webb earned another Best Supporting Actor Oscar nomination. Webb didn’t win, but co-star Anne Baxter snared a Best Supporting Actress Oscar, four years before her Best Actress Oscar nomination for All About Eve.  No nomination for Tierney, alas; she got her only Best Actress nomination earlier for the psychological thriller Leave Her to Heaven (1945).

I must admit there’s only one thing about this otherwise perfect romantic suspense film that makes me think, “Oh, what could have been!” When Rouben Mamoulian was going to direct the film, he wanted Laird Cregar to play Waldo Lydecker! (I can hear my fellow Cregar fans sighing and squealing longingly even now!) Much as I adore Clifton Webb’s performance, I must admit Cregar would have been fabulous, too, with his silky voice and imposing bulk; the nattily-dressed fat man (yes, Waldo was indeed described as fat in the novel, unlike whippet-thin Webb in the movie) hiding his resentment and heartache under a veneer of venom-tipped quips. Alas, Zanuck ultimately decided that since Cregar was already best known as a smooth-talking yet physically imposing villain, casting him as Waldo might have tipped off the audience to his true evil too soon. Yeah, I see their point, but still….  In any case, Webb and Laura’s screenwriters re-teamed in 1946 for The Dark Corner, which had enough elements in common with Laura to be considered as sort of a Laura 2—and I mean that as a compliment!

By the way, Carly Simon does a gorgeous live rendition of David Raksin's Laura theme:
http://youtu.be/Baj5Q7H5q6s