"Can’t a fellow look beyond a tennis net without being out for something?" Farley Granger in Strangers on a Train (1951)
This week's TotED post salutes Dial M for Murder, both seriously (Alfred Hitchcock's classic film version) and funny-side-up (Scott Fivelson's one-act play Dial L for Latch-Key)! (Mind the spoilers!) 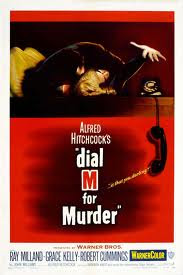 
To answer Granger's question: not in an Alfred Hitchcock movie! Former tennis champ Tony Wendice (Ray Milland) comes off all smooth and debonair, but unlike Farley Granger as Guy Haines, Tony’s not a nice Guy! In Frederick Knott’s smashing, diabolical 1952 stage thriller, Dial M for Murder (DMfM). Tony makes caring, husbandly noises around his beautiful, wealthy wife Margot (Grace Kelly), but in the wordless opening sequence, it becomes clear that she’s really just a meal ticket to Tony. No wonder she and her former boyfriend, American TV writer Mark Halliday (Robert Cummings, a Hitchcock alumnus as the hero of 1942's Saboteur) are picking up where they left off.  To be fair, Margot and Mark seem to feel a little guilty, wanting to do the right thing, but those crazy kids are stuck on each other. Tony feels stuck as well, clearly realizing his days of sponging off Margot are numbered. To borrow a line from Anthony Shaffer’s Sleuth, Tony is finding murder less burdensome than alimony. So Tony hatches a cunning plan, involving blackmailing a fellow blackguard from his college days, one Captain Lesgate…or is it C.A. Swann? (Either way, he's played by Anthony Dawson from Dr. No, among others.) Like Cary Grant’s character in Charade (1963), Swann seems to have aliases aplenty, not to mention a trail of debts and at least one dead body: “Poor Miss Wallace....” So Swann falls in with the plan, which involves keys under a staircase carpet and the split-second timing of a fatal phone call. But you know what they say about the best-laid plans….

A smash hit on London’s West End and Broadway in 1952, it didn’t take long for Hollywood to come a’knockin’. Warner Bros. was keen to get Alfred Hitchcock to direct the 1954 film adaptation, and Hitch signed on, although his heart wasn’t quite in it. In Adam Philips’ excellent review of DMfM in his blog Hitchcock and Me, he also pointed out that John Williams’ character, Chief Inspector Hubbard, “may have rubbed Hitchcock the wrong way, as competent police officers in Hitchcock’s pictures are few and far between.” But once Hitchcock met his new leading lady, Grace Kelly, an actress-director dream team was born! Hitchcock and Kelly collaborated on three movies before she traded Hollywood royalty for Monaco royalty, the other two films being Rear Window (1954) and To Catch a Thief (1955). But the team-up with Kelly wasn’t the only “first” here for Hitchcock: it was also the first—and only—time Hitchcock used the original 3-D format. With that particular 3-D process being a big fad at the time, producers attempted to woo TV audiences back into theaters, complete with the original 3-D glasses, annoying though they were. Warner Bros. insisted that Hitchcock capitalize on the 3-D fad. The stereoscopic technique was a clunky, cumbersome nuisance, but Hitchcock agreed to use it, only to have DMfM released in a “flat” version anyway! Vinnie and I actually got to see the 3-D version several years ago in my hometown, at New York City’s Film Forum. Despite the glasses’ shortcomings, we thought it was pretty darn cool, especially the scene where our gal Grace manages to grab the scissors and kill Swann in self-defense! Admittedly, sometimes it also had us snorting with laughter for the wrong reasons, like when the liquor bottles on the Wendices’ wet bar seemed to be jumping out at us moviegoers. It got me wondering what a 3-D version of The Lost Weekend starring DMfM star Ray Milland might have been like!

Considering DMfM was filmed in color (WarnerColor, no less! Technicolor, Schmechnicolor!), it makes great use of shadows and angles, especially when the camera slowly maneuvers upward. It’s almost as if God Himself is sternly looking down on Tony and Swann plotting Margot’s murder, thinking, “You two are gonna get it! Taste my wrath, you evil jaspers!” I love the look on Swann’s face as Tony shares his juicy story of stealing Margot’s love letter and blackmailing her. They’re almost like yentas gossiping over coffee and cake—or, considering this is set in England, tea and scones. And all the while, Tony is matter-of-factly wiping down incriminating fingerprints, the shifty old slyboots!

Vinnie Can’t Resist Chiming In: There was a Hallmark Hall of Fame version of Dial M... done back in 1958 – the only returning cast member was the wonderful John Williams. He too is a recurring figure in Hitchcock’s work. In addition to Dial M... and To Catch a Thief, Williams appeared on Alfred Hitchcock Presents eight times, playing functionally the same police inspector character three times, one being the epic three-part "I Killed The Count." John Williams had a heck of a career before he started telling us about the themes from “A Stranger In Paradise’ we first found in The Polovtsian Dance No. 2 by Borodin.


As Tony Wendice, Ray Milland gives one of his most compelling performances; indeed, I’d go so far as to name Tony among my Top Five Hitchcock Villains. Look at the way he manipulates Margot into staying home doing his “boring clippings” instead of going to a movie as she’d originally planned. After Tony gets home to discover that would-be victim Margot fought back and ended up killing Swann in self-defense, you can almost see the calculating in Tony’s eyes as he figures out how to make this “ghastly accident” work in his favor, the meticulous son of a bitch! (I still wince every time I see Swann fall on his back, plunging the scissors in deeper!) Grace Kelly won my sympathy as she proved to be perhaps the quintessential Hitchcock Blonde. (It didn’t hurt that her entrance is accompanied by Dimitri Tiomkin’s lushly romantic music.) Having said that, for me, North by Northwest’s Eva Marie Saint was a darn close second! In any case, John Williams steals the show as Chief Inspector Hubbard. He’s almost like a more dapper Columbo in that he can seem slightly absentminded, but when things get serious, he turns out to be a sly fox after all. When he does, you find yourself glad to be on his side!

Robert Cummings always seems to be written off as a lightweight, but I nevertheless found myself liking him as Mark Halliday. (Wonder if his character was named after crime author Brett Halliday?) Maybe it’s because I’m predisposed to like affable mystery writers, having known a few. Also, it seemed to me that Mark truly loved Margot, and vice-versa. I’ve always liked that bit in the apartment where Mark looks at Margot while talking about how it’s hard to write a perfect murder because “things don’t always work out”— and we know darn well he’s not talking about crime stories. C’mon, cut the guy some slack! He did save his sweetie, albeit with a little help from Hubbard. I thought Tony would soil himself when Mark unwittingly suggests a way to save Margot that sounds an awful lot like Tony’s murder plot. I always feel like cheering when Hubbard turns out to be truly on our heroes’ team: “They talk about flat-footed policemen. May the saints preserve us from the gifted amateur!” And such a British ending: cocktails in the face of adversity! 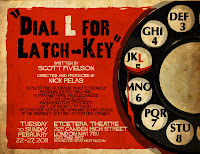 When fellow blogger Adam Philips of Hitchcock and Me reviewed Scott Fivelson’s 2010 comedy Dial L for Latch-Key (DLfLK) this past April, I thought it sounded hilarious, and I would have loved to see the much-praised live stage production if it had been within a reasonable distance of my Pennsylvania home. Alas, it was only playing at the New End Theatre in London, England, and the airfare alone was too rich for my blood. But in June, I got the next best thing: an invitation from Rick Tannenbaum of Hen House Press (http://loveandpublishing.com) , inviting me to read and review the paperback edition of Fivelson’s one-act play.

I’m pleased to say DLfLK was great fun to read, and chock full of affectionate madcap spoofing of not only DMfM and Alfred Hitchcock’s favorite tropes, but also Hitchcock-inspired thrillers ranging from The Manchurian Candidate to Charade. I could see the play’s zany absurdist shenanigans in my mind as I read it. The plot starts off in a Dial M for Murder vein, then veers cheerfully off in the wildest directions. Even the props—like the trunk festooned with such travel decals as “Tower of London” and “Alcatraz”— are a hoot. So are the stage directions. For example:

(Enter G and BOB…G is grace personified. Her golden blonde hair and radiant bearing doing all they can to raise her above her current circumstances, mink coat only partially concealing the old-movie-style striped prison uniform worn beneath it.)

(At her side, Bob, American, a handsome cipher. HIS overcoat draped over one arm. Bob is at all times reining in a boundless, featureless energy, happy to be anywhere he is. Because HE’S there. In a word, American.)

You could make a drinking game out of the references to Hitchcock-style elements! (I’m a teetotaler, so I’ll be the designated driver.) DLfLK is grand smart-alecky fun, with a broad, affectionate wink to the thrillers we grew up loving, whether we first saw them in actual theaters or on TV. Hen House Press is also producing a radio play of Dial L for Latch-Key for an NPR affiliate in New York, so keep your eyes and ears open for further developments. For more information on Dial L for Latch-Key, contact Rick Tannenbaum at Hen House Press via Twitter (@eHenHouse) or e-mail (oppknx@yahoo.com).