THE GAZEBO: Home Sweet Homicide with a Hidden Hitch 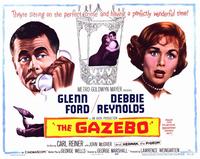 In the mid-1980s, Ted Turner was colorizing every black-and-white movie he could get his mitts on. George Marshall’s MGM comedy The Gazebo (1959) was no exception. Frankly, when I first watched the colorized version on TBS years ago (the colorization looked strangely washed-out to me), I was surprised it wasn't filmed in color to begin with. Thanks to Warner Archive, The Gazebo is now available on DVD, and thanks to TCM, this wicked little comedy will be on tonight at 8:00 p.m. EST as part of Summer Under The Stars’ Debbie Reynolds Day!

Despite the gallows humor of its storyline, The Gazebo is one of those frenetic farces that 1950s Hollywood usually filmed in bright postcard colors. Who was more bright, colorful, and energetic, then and now, than Debbie Reynolds, The Gazebo’s unsinkable leading lady? Nevertheless, the film was made in black-and-white, with Helen Rose nominated for an Oscar for Best Costume Design, Black-and-White, for Reynolds’ smart, perky costumes (which tastefully yet alluringly showed Debbie’s darling derriere to delicious advantage, if I may say so!).

George Wells adapted a script by Alec Coppel, who’d also worked with Alfred Hitchcock on Vertigo, Alfred Hitchcock Presents, and uncredited contributions to To Catch a Thief. Fittingly, The Gazebo’s hapless hero Elliot Nash (Glenn Ford), is a TV writer who’s currently working on a Hitchcock script. He’s happily married to Broadway musical star Nell Nash (Reynolds), but said happiness is jeopardized by blackmailer Dan Shelby (we never see his face, but character actor Stanley Adams provides his voice. Fans of the TV version of The Odd Couple will remember Adams as chain-smoking pool-player Sure-Shot Wilson in the “Hustler” episode; but I digress….). Shelby has been shaking Elliot down, threatening to publish risqué photos of Nell when she was a hungry young artists’ model before she became a star, unless Elliot comes up with hush money. Does anybody really get blackmailed that way anymore, considering so many celebrities out there seem almost eager to air their dirty laundry every chance they get, as long as their names are spelled right? In any case, the blackmail threats result in a murder plot, a dead body and a panicky Elliot making like a mole to hide the corpse in the new gazebo that Nell bought for the Nashes’ Connecticut home (Nell’s one of those gals who never met a garden tchotchke she didn’t like, bless her heart).

The Gazebo's origins were British, but it was Americanized for Hollywood. I think it probably would have worked best with a British cast, but the American cast takes to black-comedy slapstick like a New York pigeon takes to bread crumbs, namely the scene-stealing Herman, who becomes a member of the Nash household after being mildly injured in Broadway traffic. Heck, Herman even gets a screen credit! Indeed, there are enough bird gags in The Gazebo (my favorite being Elliot’s power to make Herman and the neighborhood birds shut up on command. Too bad he couldn’t do that to the blackmailer so easily!) to make me wonder how long Hitchcock had been developing his 1963 film adaptation of The Birds. 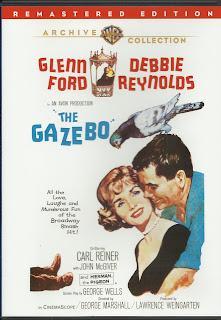 Glenn Ford is amiable enough as our highly anxiety-stricken hero, but I can’t help feeling that Danny Kaye or Jack Lemmon would have been better choices to play the increasingly manic Elliot. Well, maybe they were busy, or maybe they simply weren’t under contract to MGM. Fortunately, Ford and Reynolds had previously co-starred in another Marshall comedy, It Started with a Kiss (1959), and their chemistry went a long way. (Click here for more about Ford and Reynolds’ relationship on and off the set.) Carl Reiner (with hair) makes a fine pesky friend as Harlow Edison, the Nashes’ friend, who also happens to be the District Attorney. The ever-jolly Harlow makes no bones about his unabashed crush on Nell, up to and including driving miles out of his way just to drop by for friendly nightcaps.

Still, I found The Gazebo’s perky American stars to be quite engaging. I’m accustomed to seeing Ford playing stolid heroic types, but here he acquitted himself nicely as a man who’s determined not to let his frayed nerves keep him from protecting his beloved wife. Despite not being Danny Kaye or Jack Lemmon, Glenn Ford was a pleasant surprise as our frantic hero Elliot. As the initial blackmail target (more on that momentarily), Debbie Reynolds is as pert and winsome as ever. Since she plays a musical comedy star, she’s given an energetic Bob Fosse-style song-and-dance number, “Something Called Love.” One quibble: charming though “Something Called Love” is, was it really necessary to have Reynolds hum it throughout the movie? Well, maybe the producers figured it had a crack at a Best Original Song Oscar nomination.

Perhaps it’s because they were under contract to MGM, but the great supporting cast is practically a North by Northwest reunion. Martin Landau, in his pre-Oscar days, played a heavily Noo Yawk accented thug, The Duke. Until then, I’d only seen Landau on TV’s Space 1999, in which his performance was rather wooden, so I was pleasantly surprised by his range and flair for comedy in The Gazebo. From that day forward, I was a full-tilt Landau fan! Then there was Landau’s fellow North by Northwest henchman Robert Ellenstein as Elliot’s peripatetic agent (no, not a secret agent!).

Since Elliot writes TV mysteries, is it any surprise that he keeps referring to Alfred Hitchcock? To wit:

* “I gotta finish that script I’m writing for Hitchcock….”

* “What would Hitchcock do at a time like this?” Luckily, at this point, Hitchcock calls Elliot to check on the progress of their screenplay, giving our hapless hero an opportunity to work out a solution with Hitch under the pretext of working out their script. We don’t hear Hitchcock’s voice, of course; use your imagination! :-)

* “To England and Connecticut and Alfred Hitchcock!” This comes after Elliot toasts the new gazebo with the corpse nestled snugly in the foundation. Of course, at this point our hero hasn’t confided in Nell about the body under the gazebo, so she and Harlow just give Elliot funny looks and chalk it up to too much champagne too early in the day.

The Gazebo definitely has all the earmarks of British stage farces: slamming doors, falling-apart contraptions, wacky misunderstandings, and matter-of-factly cuckoo dialogue. For instance, when the Nashes find themselves up against it, Nell laments, “I wish this had happened in Los Angeles…They’re always finding bodies out there; they don’t think anything of it!” There’s also a funny running gag about running water—that is, the Nashes’ plumbing, which Elliot keeps trying to sabotage in hopes of making Nell eager to sell the house so Elliot can give the proceeds to the blackmailer (this is before Elliot resorts to murder).

In addition to Landau and Ellenstein, other Gazebo scene-stealers include the hilarious Doro Merande as Matilda, the housekeeper who yells every word at the top of her lungs because she’s used to communicating with her hard-of-hearing mother (you might also remember Merande from The Snake Pit and Clifton Webb’s The Remarkable Mr. Pennypacker and Mr. Belvedere Rings the Bell); John McGiver (Fitzwilly, Mame, and Midnight Cowboy, among others) as Mr. Thorpe, the Nashes’ phlegmatic handyman who keeps calling the gazebo a “gaze-bo”; and Mabel Albertson as determined real estate agent Mrs. Chandler, best known and loved by Team Bartilucci as Darren’s mother on Bewitched and wealthy Mrs. Van Hoskins in Peter Bogdanovich’s 1972 screwball comedy What’s Up, Doc?

My favorite Gazebo scene answers the musical question, “How do you solve a problem like a blackmailer?” No, the answer isn’t “Keep paying the creep until you’re bankrupt.” It’s “Just say no!” Here’s the scene, all transcribed nice and pretty for your reading pleasure:

Elliot (understandably shocked, but trying to hide it): “He did?”

Nell: “Mmm-hmm. He came to the theater about two months ago, and he brought the pictures, and he threatened to publish them unless I gave him ten thousand dollars in cash.”

Nell: “Well, I laughed in his face! Wouldn’t you?”

Elliot: “Oh yes, I…I…” (He trails off into incoherent fumferring.)

Harlow: “Still, it would’ve been quite a story for the scandal sheets.”

Nell: “Oh yes, it would have, but you know what would have happened then? You couldn’t buy standing-room-only for the next five years! I dared him to do it.”