TO CATCH A THIEF: Cary On Stealing 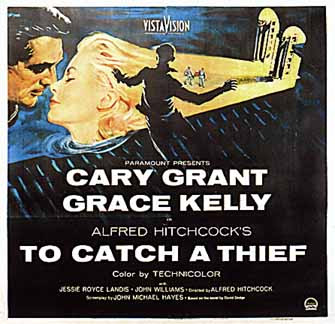 Admit it, you need a vacation like nobody’s business;  don’t we all? Wouldn’t you love to spoil yourself with a fab vacation in France, on the beach in Cannes with baubles and beauties (of both genders)? Well, Alfred Hitchcock’s To Catch a Thief (TCaT) is the next best thing! Just look at those lovely travel posters in the opening credits…listen to Lyn Murray’s score, the music sparkling like the clear blue ocean, automatically putting you in the mood for a swanky weekend on the Riviera…hear that bloodcurdling cry shattering the air as another wealthy woman finds out the hard way that she’s been robbed of her precious jewels. It’s enough to make a gal wail, “Ohhh! We can’t have nice things!”
The jewel robbery epidemic in the South of France has all the earmarks of the notorious jewel thief John Robie (Cary Grant), better known as “The Cat,” being a cat burglar and all. This is news to John, as he’d long since given up thieving after becoming a hero of the French Resistance Army during World War 2. This whole copycat-burglar thing is cramping John’s style, not to mention his retirement and freedom: everyone and his Aunt Lillian is sure that The Cat’s come back, and the gendarmes would be only too happy to see him caught red-handed. There’s even an item in renowned columnist Art Buchwald’s column spreading rumors about the notorious John Robie’s return! (Can John sue Buchwald for libel, I wonder?) 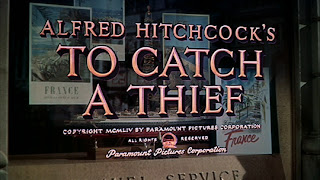 Are the French Riviera’s jewelry and their wearers safe—or do they need safes? On top of that, John’s old Resistance comrades all resent him for living on the proceeds of his past capers while they have to work at Bertani’s Restaurant (Bertani is played by Charles Vanel from Henri-Georges Clouzot’s The Wages of Fear and Diabolique, among others). Only young Danielle Foussard (the piquant Brigitte Auber), isn’t angry at him—because she’s trying to blackmail, er, persuade John to run off with her and get married despite her youth. It’s always something! Anyway, John’s not taking these accusations lying down, even on those lovely Riviera beaches. As he points out, “For what it’s worth, I never stole from anybody who would go hungry.”

John enlists the help of H.H. Hughson (Hitchcock veteran John Williams) from Lloyd’s of London to clear himself. As the title indicates, it takes a thief to catch a thief! The richest potential robbery victims on Hughson’s list are the mother-and-daughter team of Jessie Stevens (the delightful Jessie Royce Landis, playing a more lovable, down-to-earth mama than she did in North by Northwest) and her lovely blonde daughter Frances (Grace Kelly at her most radiant and elegant; she truly resembles a Grecian goddess, especially in her Edith Head gowns). Francie, as Miss Stevens is called, is definitely a classic Hitchcock Blonde with a cool demeanor and passionate fires beneath it all. She’s also part gifted amateur detective and part thrill-seeker, always up for, as our hero says, “weird excitement.” Not only has Francie seen through John’s alias, lumberman Conrad Burns (“Remind me to yell ‘Timber!’ once in a while,” John wryly ripostes), but this adventurous beauty has a surprising proposition for him: teaming up to rip off the rich. From what Jessie says to Francie, I’d say Miss Stevens takes after her dear old dad: “Why do you think we moved so often? Your father was a swindler, dear, but a lovable one. If you ask me, (John’s) a bigger operator on every level.”

TCaT is a delightful champagne cocktail of a movie, sparkling as playfully as the jewels the mischievous Francie keeps trying to tempt Robie with. Still, this being a Hitchcock movie, you’ll see a dark side to the people and plot twists of this elegant adventure, too. For example, I had to smile at the perversity of two bewitching women like Francie and Danielle essentially trying to blackmail Robie into having relationships with them! I also enjoyed the constant—and apt—comparison of insurance to gambling. That’s part of the fun of To Catch a Thief; nobody in it is completely clean.
After the amazing artistic and financial success of Rear Window (1954), some considered TCaT to be “Hitchcock Lite.” Well, *nyah!* to them! Alfred Hitchcock and returning screenwriter John Michael Hayes (working from David Dodge’s novel) just wanted to have fun. If any movie snobs have a problem with that, maybe they really are overworked and need to relax on the nearest beach! Actually, 1955 was a departure year for Hitchcock and Hayes, considering their cheeky black comedy The Trouble with Harry also came out that year (granted, at the time, European audiences appreciated …Harry more than us Yanks, who rediscovered it in later years). Hitchcock and Company brought their usual wit, panache, and exquisite craftsmanship to the caper film, specifically the Gentleman Thief subgenre. Raffles and his brethren had been sorely missed in recent years, with too many caper films too often concentrating on smash-and-grab graphic violence and gleeful sadism. Steven Soderbergh brought back the witty, playful caper film in 2001 with his dazzling remake of Ocean’s Eleven; along with its two sequels, Soderbergh and Company brought fun and smarts back to the heist movie. If you ask me, all three of Soderbergh’s Ocean movies were way more fun than the 1960 original with The Rat Pack, but that’s simply one movie buff’s opinion.
If you love chase scenes, TCaT won’t disappoint you, whether it’s John and Hughson moving progressively faster through the Nice Flower Market until they’re running from the police, or leadfoot Francie speeding along winding roads as John wipes the sweat off his hands. The French Riviera locations are as lovely to look at as the elegant team of Grant and Kelly in one of her last three films; the TCaT set was where Kelly met future husband Prince Rainier of Monaco. It’s a shame Grant only got to team up onscreen with Kelly once before her retirement, since they made a marvelous pair (as was also the case with Grant and his Charade leading lady Audrey Hepburn). Fellow Hitchcock fans may recall that Jessie Royce Landis went on to play Grant’s mom in North by Northwest (1959), even though she was Grant’s age in real life! (It’s so unfair when women age faster than men; there ought to be a law! <smile>) TCaT was nominated for three Oscars, including Best Art Direction/Set Decorations and Best Costume Design for the great Edith Head, but it was Director of Photography Robert Burks who brought home the gold at last, having just missed the brass ring previously for Rear Window and Strangers on a Train. I loved Brian Cady’s story on the TCM Web site of how Cary Grant, who’d been hell-bent on retiring from movies at that point in his long career, “agreed to read the script although he warned Hitchcock not to get his hopes up. Hitch kept the bombshell until the end of the meeting. ‘It might help you as you’re reading, Grace Kelly has agreed to play the girl and a good part of the picture will be shot on the Riviera.’ Cary Grant may have been set on retirement, but he was only human. Who could turn down a job offer like that?” Not us!