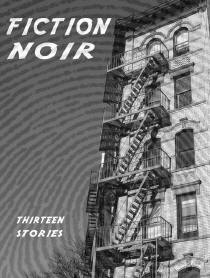 I love books as much as I love movies, so I was delighted to get the opportunity to read Fiction Noir, the latest suspense anthology from Hen House Press. The trick will be to give you all a taste of each of the 13 compelling short stories without spoiling any of the endings!

Eve Gaal’s Loser’s Ledge focuses on Viola, a woman of a certain age standing on the roof of a twenty-story building, ready to jump to her death because she can’t forgive herself for all the things that went wrong in her life, particularly one fateful day when “a simple but massive blunder…fogg(ed) up all of her good intentions and all her judgment by clouding her brain with self-pity and loathing,” all because of a lottery ticket. If there’s a moral to this poignant, tense drama, it would be: “If you want something done right, you have to do it yourself!” 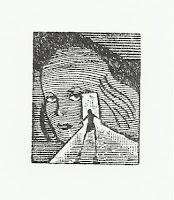 Joanne Dobson is renowned for her popular mystery book series about Professor Karen Pelletier, but I’ll admit I was particularly eager to read Dobson’s story Hey, Girlie because I grew up primarily in the Bronx myself, including being an alumna of Fordham University, where Dobson has taught. The emotions and the setting of the Kingsbridge section of the Bronx after World War 2 really rang true for me, having had family members who’d fought overseas as well. My heart went out to Rachel Cohen, the unfortunate poet and concentration camp survivor who has to face her tormentor from the camps regularly now that the creep is the building’s new super. Rachel’s account of wearing her white linen dress in hopes that “if I looked nice, they’d know I was a nice girl” broke my heart—which also went out to our bewildered, apprehensive young heroine, and her rude awakening about terrible truths that she’s not quite ready to comprehend. Rachel gets her well-deserved revenge, but at a terrible cost. If Stephen King/Richard Bachman’s Thinner made you think twice about eating strawberry pie, you might never think about cherry-topped coconut cake quite the same way again after reading Hey, Girlie.

On a more playful if darkly comedic note, there’s Everyone’s a Critic by A.R. Philips, also known for his entertaining blog Hitchcock and Me. Sure, every director wants a hit movie, but in Philips’ slyly satirical universe, film criticism can literally be murder, especially if your magnum opus is an unnecessary remake of Alfred Hitchcock’s Frenzy! Here’s one of my favorite lines from our witty narrator: “…he looked like a no-foam soy latte kind of guy, but I could have been wrong…Give me the cheap coffee in those heavy cups you get in a diner and I’m happy.” Philips’ plot cleverly veers into unexpected but satisfying directions.

You loved Scott Fivelson’s zany movie-oriented comedy Dial “L” for Latch-Key; now Fivelson teams up with Tim Cleavenger to bring us the daffy detective spoof Johnny Passe, in which Frank Sinatra, private eye plots, and avid music collectors are affectionately lampooned. Johnny’s the kind of outwardly tough, inwardly addlepated gumshoe manqué who smokes in the shower and generally makes Police Squad’s Frank Drebin look like Raymond Chandler’s Philip Marlowe. Here’s a taste of Johnny’s snappy patter: “Yeah, it’s my philosophy that dreams are like snowflakes. No two dreams are ever alike. In fact, no two clubs are ever alike—although once I was in a club where they served a drink called The Snowflake. There was a lot of ice in it, and if you drank enough of ‘em, you’d fall down. If you didn’t drink ‘em, they’d only evaporate, and like dreams, become air. At least that’s what happened to mine.”

Steven Fried’s Anvil combines noir-style storytelling with philosophy and surrealism, in a rueful meditation on death and rebirth and plenty of food for thought.

Dennis Brock’s The Vinegar of the Seven Thieves is a tale of desperate, hungry people who find themselves running afoul of spies during World War 2, including the draft-dodger narrator. No glamorous James Bond-type spies in this brooding, gritty tale. To me, it’s the most deeply steeped in the noir style, with its no-way-out fatalism.

Remind me not to go boating with Greenbaum, the lawyer protagonist of Isaac Grimm’s sharp, cleanly-written Wrongful Death! Furiously miserable in his imploding marriage, he gets ideas when a new client comes to him certain that her mother’s fatal boating accident was murder, giving Greenbaum ideas about how he could literally get away with murder.

We love Lucy—Lucy Gordon, that is! Lucy is a young local newspaper reporter by day and, in today’s tough economy, a janitor by night in Murder Brokers by Jennifer Leeper. One of her cleaning clients, Arrow Property Group, is quite neat—too neat, as if nobody uses their chairs and desks at all. And what connection does it all have with the recent spate of pretty cleaning ladies turning up dead? As a writer and editor, I could relate to heroine Lucy Gordon’s annoyance about “the drastic surgery performed on my county commission stories by our copy editor.” Another great line: “It’s a voice that commands, it doesn’t request.” In addition to Lucy, I also found the other characters memorable and engaging, as was the depiction of small-town life and its newspaper reporters. 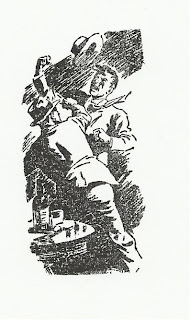 In The Village Idiot by Rivka Tadjer & Roberto Gottardello, troubled, vulnerable FBI agent Mary returns to the scene of a long-ago tragedy in Woodstock, NY that she was powerless to stop due to her own failings. Now that she’s back, will she redeem herself at last, or will history repeat itself? To me, Mary comes across as somewhat of a Clarice Starling who’s fallen on hard times, both emotionally and physically. Although I empathize with Mary, I’m afraid I’d be reluctant to put my life in her hands (not a criticism, simply an observation). I feel sorry for her and frustrated with her at the same time. The emotions and the brooding, sordid atmosphere and goings-on sound authentic. Loved this line: “Did you eat a fox sandwich to become so smart?”

Bernard Schaffer’s When the Man Comes Around is another standout, a suspenseful story harkening back to a shameful chapter of medical history. In 1935, Dr. Antonio Egas Moniz devised the lobotomy, convincing other doctors and the public that it was a surefire cure for any and all mental disorders. The 1940s and 1950s were the lobotomy’s heyday until people wised up and antidepressants were invented to make all those pesky emotional problems go away. New York City Police Detective Jimmy O’Leary is horrified to discover that a certain Dr. Freid is performing lobotomies the no-frills way: with a spike and a mallet and a life of being a virtual vegetable—if the patient lives. And Jimmy’s troubled  ten-year-old nephew is next, despite his having responded well after spending time with Uncle Jimmy! The kid’s all-but-neglectful parents just seem to want the quick fix promised by Dr. Freid. But Jimmy has his own prescription for the “good doctor”…. Great dialogue, including this passage at the station house:


“Hey, what’s a nice way to say I was dealing with an ass…and he wouldn’t shut his yap?”

One of the older detectives said, “The subject was belligerent despite my repeated attempts to coerce him otherwise.”

If you like gambling and the films of Martin Scorsese, I’m betting that Semyon White’s High Stakes Graft will be up your alley. When Las Vegas gambler Dean Curtis looks into the apparent murder of a bewitching, enticing young gambler he's attracted to, he finds there’s more than meets the eye in this fast-moving tale. There’s action and exotic atmosphere aplenty, vivid enough for me to picture it in my mind’s eye. I wouldn’t mind following Dean and Noelle on further adventures!


Step into your local bookstore and get ahold of Fiction Noir today! Available at  Barnes & Noble Nook, Amazon Kindle, and the Google eBookstore, as well as in paperback. (Holiday gift-giving season is just around the corner!)