MINISTRY OF FEAR: The Cake is a Lie! 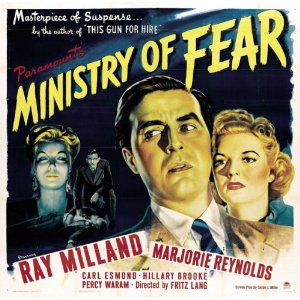 I proudly proclaim that as of this writing, it's my birthday!  I’m now a fresh-faced lass of 49 summers!  Director Fritz Lang’s 1944 film adaptation of Graham Greene’s 1943 suspense novel Ministry of Fear (MoF) struck me as the perfect movie to blog about today. It’s got everything this birthday girl could want in a suspense movie blog post: suspense; paranoia; atmospheric lighting and cinematography by Henry Sharp (Duck Soup; The Crowd; It Happened on Fifth Avenue); offbeat comedy, and most importantly for any celebration, cake!

The setting is wartime 1941 England, and our hero, Stephen Neale, is played by Ray Milland, always awesome whether he’s in comedies such as Easy Living or The Major and The Minor; suspenseful yet urbane thrillers like The Big Clock and Dial M for Murder; chilling science fiction like X: The Man with the X-Ray Eyes; and of course, his Oscar-winning performance in The Lost Weekend. I’ve always particularly liked Milland’s sensitive side. For me,  MoF works so well because the character he plays seems so likable and poignant, especially considering what he’s been through. Milland should’ve gotten an Oscar nomination for MoF.  The script by screenwriter/producer Seton I. Miller (Scarface, The Dawn Patrol; Here Comes Mr. Jordan; The Adventures of Robin Hood) is pretty wild, but it had me hooked!

We first meet Stephen sitting in a dimly-litroom as he waits for parting advice from Dr. Norton (Niagara; The Prize; TV’s 77 Sunset Strip). As Stephen literally watches the clock, the dialogue sets the scene:


Stephen: “You know, it’s interesting to watch the last minutes crawl by, after so many of them.”

Dr. Norton: “I always meant to speed it up.”
Stephen (wryly yet ruefully): “Fine time to think of it.”


Although the good doctor urges Stephen to make his fresh start in a quiet town far from the madding crowd of Blitz-plagued World War Two London, Stephen says thanks, but no thanks: “I’m gonna spend the first month being pushed and jammed by the biggest crowds I can find. I want to hear people talk and laugh…seeing faces will be a good tonic.” We finally see the name of the place Stephen’s leaving: Lembridge Asylum! Dr. Norton kindly but firmly advises Stephen not to get involved with the police: “A second charge wouldn’t be easy.”  Um, we’re not talking about a ticket for jaywalking here, are we, Stephen?

As our hero awaits the next train, he finds himself at a jolly village fete with games, kids, and food, particularly a tasty-looking cake set to be raffled off for a local charity, The Mothers of the Free Nations. The fortune-teller, one Mrs. Bellane (Aminta Dyne), gives Stephen unusually specific weight and measurements for the cake in order to win that tasty dessert. Who knew innocent charity fetes were fixed? But it’s easy to understand why the cake is so coveted, considering flour and butter weren’t easy to come by during wartime.  In fact, the ladies in charge of the fete get awfully anxious when it appears Stephen won the cake in error, to the visible annoyance of another apparent cake-lover, a gent named Cost (Dan Duryea, the man people loved to hate in other Fritz Lang noirs, including Scarlet Street and The Woman in the Window, not to mention Duryea’s funny/menacing henchman in Howard Hawks’ Ball of Fire). No wonder Cost and Mrs. Bellane look pretty darn peeved when Stephen leaves with the cake.
As our friend and fellow blogger Yvette of …in so many words put it so well in her own 2010 MoF post:

“(Duryea is) everyone's favorite sleaze of a villain, so you know right away something is definitely up. The thing about the 'country fete' is this: the place appears 'normal' but with a very sinister vibe, seriously creepy. Yet Milland, just released from incarceration, pretends, I suppose, that he doesn't notice or maybe he thinks this is the way the world acts on the 'outside'. Hard to tell. The war is a burden on everyone and maybe this is the new normal.”  For the record, my favorite bit in this scene is when Stephen guesses right about the cake’s weight; suddenly everyone and everything goes silent, as if it was one of those E.F. Hutton commercials from the 1960s and ’70s!  It’s a brief, deft blend of comedy and foreboding.  Talk about a strange twist of fete!

Stephen’s sudden journey down the rabbit hole gets progressively more surreal when he boards his train to London. A blind man (Eustace Wyatt of Gaslight; Journey Into Fear; Madame Curie) sits there, and they share the cake. Too bad Stephen doesn’t notice that the supposedly-blind man keeps darting glances at our hero! When the guy tries to kill Stephen and grab the cake, things start blowing up real good, and that’s only the beginning of Stephen’s suspenseful, nutzoid ordeal! Increasingly paranoid, our beleaguered hero retains irascible, mercurial private detective George Rennit (Erskine Sanford, who performed with Orson Welles and his Mercury Players in Citizen Kane; The Magnificent Ambersons; The Lady from Shanghai), only to find Rennit's office ransacked.  The strange trail of clues leads to Mrs. Bellane—but not the one we viewers met at the fete! This new Mrs. Bellane is a babe, played by the ever-slinky and mysterious Hillary Brooke (Invaders from Mars; The Maze; Alfred Hitchcock’s 1956 version of The Man Who Knew Too Much; and quite a few Sherlock Holmes films and Abbott and Costello comedies).  Too bad this rather glamorous séance ends up in murder, with Stephen the victim of the biggest frame-up since Whistler's Mother! Without giving too much away, I can sum up Stephen’s plight in two words: Nazi scum!   Even with everything Stephen goes through in this cinematic rollercoaster ride, he often manages to be saner than the oddball characters (including Alan Napier in his pre-Batman days) who are out to get him! At least Stephen seems to have found allies in Carla Hilfe (Marjorie Reynolds of His Kind of Woman; Holiday Inn; and The Time of Their Lives, not to mention playing Peg Riley on TV’s Life of Riley) and her brother, Willi (Carl Esmond of Sergeant York; The Dawn Patrol; Her Highness and the Bellboy), good-natured Viennese refugees who are helping The Mothers of the Free Nations. Need I say romance between Stephen and Carla isn’t far behind? My heart really went out to poor Stephen, and he truly engaged my sympathy as he did his best to hold onto his hard-won sanity in the midst of chaos not of his own making. I was especially touched by the scene where Stephen confides in Carla about the tragic circumstances surrounding the “mercy killing” of his beloved wife, resulting in his two-year stint at Lembridge Asylum.

If, like me, you love fast-moving, complicated, convoluted plots, chases, and eccentric touches, I think you’ll find MoF worth celebrating anytime!

For more MoF fun and info, check out these links:

Er, I’m not into nonfiction. Where’s your mystery/suspense section?