Where there’s life, there’s Hope—Bob Hope!  Okay, so I borrowed that from an ad line from another one of Hope’s comedies, but the point is, Bob Hope and Paulette Goddard were a delightful team in their first film together, Paramount’s The Cat and The Canary (TC&TC).  Produced by Arthur Hornblow of Witness for the Prosecution fame, and based on John Willard’s original 1922 stage play, the popular thriller was eventually adapted for both stage and screen in 1927 and 1930.  Director Elliott Nugent (My Favorite Brunette, Up in Arms) joined forces with Hope and Goddard for this 1939 version of the story, adding more witty, playful comedy and romance to Willard’s thriller. This version worked so well that Hope and Goddard made two more films together: The Ghost Breakers (1940), and Nothing But the Truth (1941).  For the record, there was also a 1979 version.  I never saw it, but the stars sound promising:  Yanks Carol Lynley and Michael Callan, and Brits Honor Blackman, Wendy Hiller, Edward Fox, Olivia Hussey, Daniel Massey, Peter McEnery, and Wilfrid Hyde-White. But I digress….

Here's looking at you, kids!

Universal actually owned the rights to Willard’s play, but sold them to Paramount. Fun Fact: the film, along with the 1940 film The Ghost Breakers (which I’ll discuss next time), was an inspiration to Walt Disney for his Haunted Mansion attraction at Disneyland!   Focusing on the funny, The New York Times’ film critic Frank S. Nugent describes Bob Hope not as the thing with feathers a la Emily Dickenson, but as having “a chin like a forehead and a gag line for every occasion… (This version of the story) is more hair-brained than hair-raising, which is as it should be.”  I agree: with this cast, fun and suspense make a swell team, including the delightful Nydia Westman (the 1933 version of Little Women; The Remarkable Andrew; The Ghost and Mr. Chicken) as Cousin Cicily, a charmingly daft flibbertigibbet among the late Cyrus Norman’s relatives.  The supporting cast weren’t small potatoes, either, with George Zucco (The Mummy; After the Thin Man; The Hunchback of Notre Dame) and Gale Sondergaard (Anna and the King of Siam; The Letter; and Best Supporting Actress Oscar-winner for Anthony Adverse).  I especially enjoyed Sondergaard as Miss Lu; she’s kinda like a sophisticated Bayou Mrs. Danvers played for straight-faced laughs, blending mystery, menace, and mirth. Both Zucco and Sondergaard  playfully spoof the more ominous roles they were known for, while still being spooky enough to keep viewers on their toes, blending suspense and comedy into a sparkling cocktail. As Lawyer Crosby (no relation to Hope’s future screen co-star Bing Crosby), George Zucco’s foreboding presence adds the right touch of menace.


Hope’s movie career had begun with The Big Broadcast of 1938, and Goddard started her career as a child model, debuting in The Ziegfeld Follies at the tender age of 13!  Goddard’s fame as the Follies’ girl on the crescent moon put her on the map.  She was married to a a millionaire at the age of 16—and divorced not long after that.  After dissolving her marriage in 1931, Goddard went to Hollywood, where her natural talent and beauty sent her stardom soaring, bewitching Hollywood’s elite.  She earned a Best Supporting Actress Oscar nomination in the 1943 war drama So Proudly We Hail!  She attracted some pretty remarkable fellas as husbands, too:  Charlie Chaplin; Team Bartilucci fave Burgess Meredith; and author Erich Maria Remarque of All Quiet on the Western Front fame. Goddard also did her bit for higher education, leaving over $20 million to New York University when she died in 1990.  What a gal!


The plot involves a gaggle of distant cousins who’ve come together after 10 years for the reading of Cyrus Norman’s will.  In the great comedy-thriller tradition, the prettiest and most generally winsome gal, Joyce Norman (Goddard) finds herself the designated Lady in Distress, while the affable, quip-slinging actor Wally Campbell (Hope) has noticed how little Joyce has grown up quite nicely.  Attraction is in the air, and no wonder, with the delightful chemistry between Hope and Goddard!  I especially liked the way Wally manages to be brave for Joyce in spite of his nervousness.


In addition to Joyce and Wally, the prospective victims, er, heirs include Fred Blythe (John Beal of Double Wedding; My Six Convicts; The Firm); Charlie Wilder (Douglass Montgomery, another 1933 Little Women cast member); and Aunt Susan (Elizabeth Patterson, whose long career included Intruder in the Dust; Lady on a Train; TV’s I Love Lucy as babysitter Mrs. Trumball).  Wally tries to put the others at ease with quips: “I hear old Uncle Cyrus’s ghost is holding bank night.”  What’s more, thanks to Wally’s theatrical background, he can’t help predicting each new spooky suspense cliché, keeping the others’ heads turning suspiciously, prompting Wally to suggest to Joyce, “I’ll recommend a nice quiet bomb-proof cellar to you for the next 30 days.”  Sorry, guys, everybody’s gotta stay overnight whether they want to or not.  As Wally wryly explains, “The members of Local Number 2 of the Bayou Canoe Paddlers and Putt-Putt Pushers Union fold putt after midnight.” Well, that’s OK; Wally and Joyce and company can always while away the time looking for a diamond necklace worth a fortune while trying to avoid being bumped off.

On top of the creepy goings-on at ol’ Blue Bayou, the local authorities announce that there’s a fugitive psychopath on the loose from Fairview, the local asylum. “That’s all we needed,” Wally says. “Well, anyway, he’ll feel right at home.”  The killer is known as “The Cat,” but this “Cat” sure isn’t the suave Cary Grant/To Catch A Thief kind of cat burglar!  Soon Wally and Joyce are up to their ears in danger and romance, with more secret panels than The Game Show Network as Miss Lu stirs the pot with ominous warnings and whatnot!  Can Wally and Joyce live happily ever after, “live” being the operative word?  One thing’s for sure: with Hope and Goddard, it’ll sure be fun finding out!


If you like The Cat and The Canary, check out other reviews of this fun film by other swell bloggers!

1.) Yvette Banek from her stupendous blog IN SO MANY WORDS from March 2012!

Also, don't miss an uncredited Charles Lane (Ball of Fire; I Wake Up Screaming, etc.) in the final scene!  I admit it, I'm a sucker for a happy ending, especially a funny one! 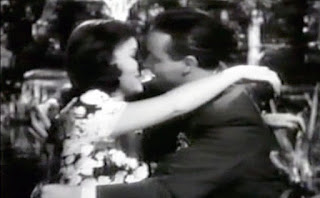