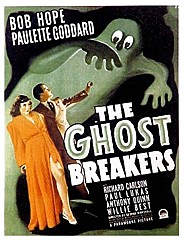 As fond as I am of the 1939 version of The Cat & The Canary, the words of that great philosopher Daffy Duck leap to mind:  “If they like that mess, they’re starvin’ for some real hoofin’!”  Well, if Paramount’s 1940 tweaking of The Ghost Breakers (TGB) isn’t the real hoofin’, I don’t know what is!  It’s a premium blend  of snappy comedy, playful romance, and genuine spooky suspense.  Producer Arthur Hornblow, Jr. (Witness for the Prosecution; The Asphalt Jungle; Oklahoma!) reunites The Cat & The Canary co-stars Bob Hope and Paulette Goddard, as well as director George Marshall (The Gazebo; It Started with a Kiss). Their funny, sparkling chemistry together is better than ever, blending warmth, romance, and comedy as deliciously as a daiquiri.  Hope and Goddard are so darling together, I want to hug them and bring them home for the holidays!  (But a DVD will do!)  I like the cheeky references to Paulette Goddard’s Cecil B. DeMille movies, too (Unconquered; Reap the Wild Wind, etc.).

Based on the work of Walter DeLeon and based on the play by John Willard and Paul Dickey and Charles W. Goddard (any relation to co-star Paulette Goddard?), the film gets off to an exciting start in New York City during a violent thunderstorm that’s almost worthy of Hurricane Sandy.  “Nice night for a murder,” says our heroine Mary Carter (Goddard) as she packs for her voyage to pre-Castro Cuba.  She only thinks she’s kidding, with all the mystery and intrigue afoot!  You see, Mary’s off to Cuba to claim her family inheritance, Castillo Maldito, or “Black Island.”  Sounds cozy already, huh?  Mary’s mom had told her about Black Island and its sinister legends, but Mary’s a good-natured yet skeptical New Yorker who doesn’t scare easily: “(My mother) also told me about Santa Claus, Snow White, and the Seven Dwarves.”  Of course, her Cuban advisor, Senor Havez (Pedro de Cordoba of Anthony Adverse; The Corsican Brothers; Hitchcock’s Saboteur) gives Mary a last friendly warning: “We must admit there is a dividing line somewhere between superstition and the supernatural.  All I know is that during the last twenty years, no human being who has tried to spend the night in Castillo Maldito ever lived to see a sunrise.”  You never know; I can imagine the eager developers eventually showing up waving contracts for chain restaurants and hotels anytime now!  But Mary gets an urgent phone call from Ramon Medeiros (Anthony Quinn of Road to Singapore and Road to Morocco, as well as winning Best Supporting Actor Oscars for Lust for Life and Viva Zapata!) about her upcoming trip. Alas, whatever it was he wanted to say gets lost in a hail of gunfire, and poor Medeiros is no more.  What was Medeiros trying to tell Mary before everyone got trigger-happy?

"Johnny Ola told me about her! They call her 'Superman'!"


Meanwhile, meet our hero, radio star Larry Lawrence (Hope) and his valet Alex (Willie Best of High Sierra; Cabin in the Sky; and Hope and Goddard’s third film together, Nothing But the Truth). Larry’s full name is in fact Lawrence Lawrence Lawrence, a name so nice they named him thrice!   “My parents had no imagination,” Larry explains.  He and Alex are packing for a fishing trip, but will they end up sleeping with the fishes instead?  You see, as if the storm and the hotel’s resulting blackout weren’t already agita-inducing, Larry’s radio show focuses on dishing the dirt on notorious criminal underworld types. Wouldn’t you know Larry has run afoul of gangster Frenchy Duvall (Paul Fix of After the Thin Man; Dr. Cyclops; and ironically, TV’s The Rifleman, as Marshal Micah Torrence!)?  Now Duvall is out for blood.  Sheesh, underworld types can be so sensitive!  As more gunplay ensues, Larry fears he’s the one who accidentally killed Medeiros, and he and Alex end up unwittingly joining Mary on a slow boat to Cuba!

Romance blooms for Mary and Larry, though that doesn’t stop others from trying to keep our heroes from reaching Black Island, including Dr. Parada (Paul Lukas of Alfred Hitchcock’s The Lady Vanishes; 20,000 Leagues Under the Sea; Watch on the Rhine, the film that won Lukas his Best Actor Oscar), Anthony Quinn again, this time as Ramon Medeiros’ brother Francisco.  Look sharp during the scene at the Las Palmas nightclub with Lloyd Corrigan (Whistling in the Dark; The Big Clock; The Manchurian Candidate; the Boston Blackie movies) for a brief appearance by lovely Dolores Moran (To Have and Have Not; The Horn Blows at Midnight; Old Acquaintance) and a dapper young Richard Carlson (The Little Foxes; The Creature from the Black Lagoon; It Came from Outer Space; and the fact-based 1953 to 1956 TV series I Led Three Lives) as Mary’s old friend Geoff Montgomery. Carlson is in one of my favorite scenes:

Geoff:  “A zombie has no will of his own.  You see them sometimes walking around blindly with dead eyes, following orders, not knowing what they do, not caring.”


TGB’s comedy and horror elements blend superbly, with character actor Noble Johnson (King Kong; Jungle Book; The Most Dangerous Game) playing a truly haunting, memorable zombie.  John M. Miller from the TCM Web site notes that TGB pre-dates Val Lewton’s I Walked With A Zombie by three years.  For better or worse, like any actors who were even remotely swarthy, both Anthony Quinn and Noble Johnson were frequently cast in supporting roles at Universal Studios and RKO as Native Americans, Latinos, Arabs, and other so-called “exotic” types.

TGB’s production values are top notch, from Edith Head’s gorgeous wardrobe for Paulette Goddard, to Hans Dreier and Robert Usher’s Art Direction, to the cinematography of Charles Lang (Charade; Some Like It Hot; How to Steal a Million).  Farciot Edouart’s special effects photography with the ghosts emerging is eerily captivating.

Willie Best was highly praised by none other than his co-star Bob Hope, who said Best was one of the best actors he ever knew—and yet so many people have criticized him, or more specifically, the African-American stereotypes he was called upon to portray. I say you can’t fault a performer (or anyone else) for NOT being ahead of his time!  My dear friend and fellow blogger Becky Barnes of ClassicBecky’s Brain Food renown agrees: “Willie Best was one of the best comedians of the era. It's such a shame things were the way they were then. I think he just about carried The Ghost Breakers, and he deserves acclaim for his work.”  Amen to that, sister!

Just as zombies never die, neither do remakes:  The Ghost Breakers was successfully remade in 1953 for Dean Martin and Jerry Lewis as Scared Stiff, with Lizabeth Scott as the heiress-in-distress, including voiceover cameos by Bob Hope and Bing Crosby!