Danny Kaye was the first performer ever to be personally requested by His Highness to headline a Command Performance, making him King of Jesters and Jester of Kings—but as far as we of Team Bartilucci are concerned, he’s always been royalty in our book!  As longtime TotED readers know, I’ve been a big fan of Danny Kaye (1913—1987) since I was a kid.

If you’re as much as a Danny Kaye fan as I am, author David Koenig’s latest book: Danny Kaye: King of Jesters (Bonaventure Press, 2012) is a MUST-read!  Koenig’s previous books include Mouse Tales: A Behind-the-Ears Look at Disneyland; and Mouse Under Glass: Secrets of Disney Animation & Theme Parks. He truly does Kaye justice with his affectionate yet clear-eyed view of Kaye’s long, remarkable career—a refreshing and welcome change of pace from certain other biographers who flaunt unfounded rumors about him, using un-called-for scandal-sheet tactics!  Koenig’s book focuses on Kaye’s film and TV work, and the behind-the-scenes info about the making of Kaye’s 17 theatrical films, as well as his TV shows, including his award-winning variety series The Danny Kaye Show (1963—1967).


Like so many great entertainers, the former David Daniel Kaminski was a native New Yorker, born in Brooklyn.  Back then, I was a child growing up in the Bronx in the early 1960s, seeing Danny Kaye for the first time on TV.  One weekend afternoon, WPIX was broadcasting Samuel Goldwyn’s delightful and surprisingly soulful 1947 film adaptation of James Thurber’s The Secret Life of Walter Mitty, and it quickly became one of my all-time favorite movies (and still is!).  Moreover, our mother was a Danny Kaye fan with a passion for fashion; in fact, Mom and my Auntie Joy had been models in their youth, getting opportunities to wear the fashions of designers like …Mitty’s Irene Sharaff, including fabulous hats, some almost as daring as the ones from …Mitty’s  “Anatole of Paris” number. Mom could rock a chapeau like nobody’s business!  Anyway, at home, our whole family often enjoyed Danny’s films, with their catchy music, clever slapstick, and zany wordplay, courtesy of the brilliant, talented woman behind the man:  the amazing Sylvia Fine, Danny’s lyricist, composer, manager, and in 1940, his wife for the rest of his life. The talented Sylvia was responsible for many of Kaye’s most popular songs and musical routines; no wonder Danny became my first celebrity crush, with him and Sylvia as one of my favorite show-biz power couples!

Actress and co-star Betty Garrett (On the Town; Neptune’s Daughter; TV’s Laverne & Shirley) recalled the chemistry between Sylvia and Danny when they met at the Sunday Night Varieties: “I was with Danny in the little Manhattan club when Sylvia was brought in to write some special material. I observed the magic moment when they discovered each other. It was truly love at first sight. I think they fell in love with one another’s talent as much as with one another.” 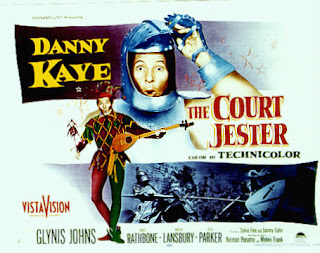 As Koenig says in his introduction, Wonder Man wasn’t merely the title of one of his hit movies. With his remarkable range, Kaye was versatile as all get-out, racking up triumphs in the worlds of records, television, stage and screen.  To some extent, the versatile, multifaceted Kaye was almost too good, at least from a branding standpoint!  Then as now, agents had to market their clients, but Kaye had so many talents and hooks, the powers that be apparently didn’t quite know where to start with him, as Koenig explains:

“…Kaye’s greatest obstacle to mass popularity was that he could do too much, too well.  He was impossible to classify. Without a brand, he found it difficult initially to make a name for himself and ultimately to keep that name remembered. For his most celebrated triumphs were live on stage, creating an in-person experience that could not be preserved to its full effect except in the memories of the individuals in the audience.  Film, as it turned out, was possibily the worst medium at capturing a Danny Kaye experience—trapping him in a particular character and story, awkwardly trying to show off as many of his divergent talents as possible…Nonetheless, the motion picture is entertainment’s most faithful time capsule, and consequently, offered Kaye his best-remembered roles: the storyteller Hans Christian Andersen, the daydreamer Walter Mitty, and the tongue-tied Court Jester with the vessel in the pestle.  Or was it the flagon with the dragon?”

When Danny signed with his first agent, Harry Bestry, in 1937, he'd developed a “Mad Russian” character, to introduce a thickly-accented version of the song “Dinah” (“Deenah, is there anyone feenah/In the state of Caroleenah?”)  Bestry began marketing Danny as The Mad Russian. This character was also spoofed in Warner Bros’. Looney Tunes: the hilarious 1945 short Book Revue (a.k.a Book Review), directed by Bob Clampett.  How fitting, considering Danny’s comedy was broad early on, from his years as a tummler in the Borscht Belt. As you can well imagine, Kaye had audiences in stitches with his over-the-top accents, screaming, and facial contortions.  How could anyone not laugh? 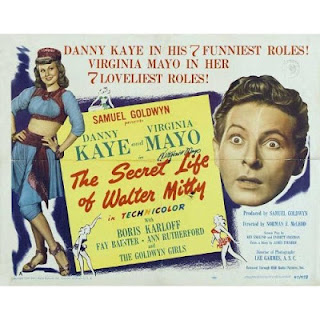 Koenig goes on to say that Samuel Goldwyn had intended to use Kaye as a new Eddie Cantor. Goldwyn did end up hiring Thurber to contribute to the script, but most of his suggestions were ignored. The ones that were used justifiably got the boot (and I don’t mean the film’s villain!), including a melancholy Irish daydream and lots of small talk between Mitty and his dreary so-called loved-ones. I'd heard that other …Mitty scenes left on the cutting-room floor included a pub scene (meant as part of the Irish scene, perhaps?) included a scene with our hero dealing with a Frankenstein monster (to play off co-star Boris Karloff, maybe?), or something like it! 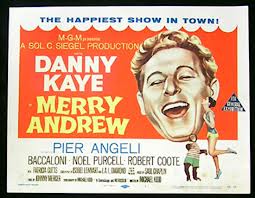 Then there was the epic comedy The Court Jester (1956), now justifiably hailed as a classic. It was well received upon its original theatrical release, but it ended up being so expensive to produce that it seemed doomed to lose money—sheesh, it’s always something! Even more frustrating, Kaye’s star had begun to fade, since he’d  been off movie screens for two years, albeit for humanitarian reasons:  he’d been traveling the world for UNICEF (more about that shortly).  Luckily, time has been kind; over the years, The Court Jester started to turn up frequently on TV and on Blu-Ray and DVD, getting discovered by new audiences who love to laugh. 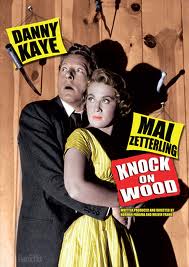 Danny enjoyed appearing onstage, but seemed uncomfortable doing interviews, talk shows, or other promotional work on his days off; to be fair, who can blame him?  Still, by the early 1950s, his agent thought he needed better rapport with the general public.  Fate stepped in on a jet plane, where Danny found himself sitting next to the head of UNICEF. Their work helping the impoverished children of the world touched Danny deeply. He agreed to travel to promote the organization, and did so tirelessly for the remaining 32 years of his life.

Furthermore, earlier this month, TCM celebrated Danny Kaye’s 100th birthday (give or take a year) with a 24-hour marathon of virtually every one of his classic movies, hosted by Robert Osborne and Danny's journalist daughter Dena Kaye, as well as airings of The Danny Kaye Show and a 1968 episode from his stint on The Dick Cavett Show.  Dare we hope there might also DVD/Blu-Ray editions of Kaye’s classic films in the near future, too?