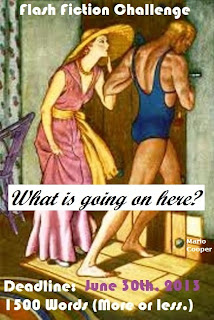 Our dear friend and fellow blogger Yvette Banek of "...in so many words..." has enticed my husband Vinnie Bartilucci of The 40-Year-Old Fanboy and I into a Flash Fiction writing challenge.  With summer upon us and the suspenseful yet charming illustrations of Mario Cooper, Vin and I were happy to join the fun!  Thanks for letting us play in your garden, Yvette!

Milo grunted against the door, wet with sweat instead of the resort’s cool, refreshing pool.  “I needed this today?”

After all the work and red tape it had taken Milo and Rosalie -- the latter being Milo’s charming, hot (in every sense, given the heat) assistant and beloved -- to get the MacGuffin Pool open at last, they couldn't get in the pool fast enough.  They could see the crowds getting longer and thicker than a Mister Softee Double Sundae, from the window.  Just one little problem:  some idiot had trapped them in the old bank vault that they’d been assured would be gone and headed to the scrap heap by now.

Milo kept himself from yelling at Rosalie by focusing his increasing rage at the frozen deadbolt that kept them locked inside the tiny poolside cabana at the resort, the most exclusive in Brooklyn.  He had to remind himself that in all fairness, he was the one who shut the door behind him to prove that she COULDN’T have locked herself in all by herself moments before.  By pressing against the swollen door and not making eye contact, he hoped she wouldn’t choose to bring that…

Rosalie rose from the dusty wicker chair and stormed about as well as she could across the modest floor.
After a time, Milo heard voices from the other side of the door.  He couldn’t make out the words, but the voices were high-pitched and numerous.  He pounded on the door with an open hand, calling for help, and the voices went silent.  The chattering began again, a bit closer.  Another pound at the door was met with what sounded like girlish giggling.  Then there was a quiet tap at the door, met by more tittering.  The voices were closer to the door now, and he could make out they were not speaking English; it sounded more like Japanese.

“Great,” thought Milo, “If I’d stayed married to my first wife, SHE could have talked to them.”  Rosalie either didn’t hear him, or heard it PERFECTLY, and chose to file the comment for later use, seeing as she had plenty to use at the moment.  He tried to call through the door to the (based on the pitch of their voices) girls to get them to help, but the tinkling tones from outside the building brought a shadow to his face.

“Softee-san!  Softee-san!” chattered the younglings, and a chorus of feet stampeded out of the room.  Milo slapped the door, this time in frustration.

“Will you please get that thing open so we can get in the pool?  The sun’s going down already!”
Milo didn’t even turn as he asked, “How do you know” You’re not even wearing a watch!”

“I can SEE it through the curtains!”
…

Milo turned, but from the look on Rosalie’s face, she had already come to the same conclusion he did.

He walked across the small room, opened the floor length curtains…

He turned the lock on the glass patio doors, and with a flourish, bowed and waved at the door.

Rosalie collected her picture hat, wrap, and dignity, and walked through the door.

“Let’s not come back here.”

“Let’s find those little kids, then kick them in the pool.”