This post is forThe Great Villain Blogathon, Hosted by Speakeasy; Shadows & Satin; and Silver Screenings, from April 13 through April 17, 2015, revised for 2015! 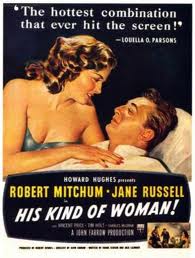 Have you ever seen a movie that seems like a typical genre flick, but as you keep watching it, you realize it’s got a mind of its own, and it’s so wild and crazy and all-but-off-the rails, you soon realize that you can’t help loving it?  Well, gang, meet the 1951 RKO comedy/noir His Kind of Woman, which also quickly became one of my favorite movies!  Director John Farrow (The Big Clock; Wake Island; and; Hondo, among many other memorable films, with the directing mostly given to Richard Fleischer (Fantastic Voyage) was responsible for considerable tweaking—re-shoots, even!  Lots of writers were in His Kind of Woman, too, including Frank Fenton and Jack Leonard, with Gerald Drayson Adams’ original story getting credit as well. Seems like everyone gets a little credit here, and why not, with that swell cast?

In His Kind of Woman, we meet our Villain from the start: Nick Ferraro, a vicious deported crime boss with a sinister agenda. Raymond Burr plays one of his very best villain roles here as the wicked Raymond Burr, the man who scared us in Alfred Hitchcock’s Rear Window; Raw Deal; A Place in The Sun; the role of Steve Martin (no, not the actor/comedian/author Steve Martin) from the classic Japanese thriller Godzilla, now a hero for a change!  We don’t want to spill all the surprises, though we’re impressed with Burr's range, from bad guys to many Emmy-Awards for his role as good-guy-lawyer Perry Mason.  In real life, Burr was a complicated man who left his private life to himself, with his loyal long-time friends and colleagues, including the cast of Perry Mason and Ironside.  Good for him; the man was entitled to have a private life and trusted friends as, as well as his Emmy Awards!

Burr freely invented the facts of his life, often claiming to tragedy to triumph, claiming to have had a happy childhood; then joining the Coast Guard; then acting and working at a Vancouver stock theater. No wonder Burr became an actor, even if Burr had to fudge his credits – but it worked!  Burr became starstruck, becoming an apt pupil, eager to become an actor.  His  He started playing heavies (literally, with his huge frame)  playing heavies to film movie stars villains to fame and fortune as TV’s Perry Mason and Ironside, with fame and Emmys, bless him; with Burr’s superb as a fine a fine actor both before his success as a TV and film actor and with Burr’s thanks to Perry Mason and Ironside!  Burr was quite the chameleon, but I’d say it served him well in his acting career. showed

But today, the spotlight belongs to the stars of His Kind of Woman!

Burr played superbly in his villain roles, which says a lot, considering Robert Mitchum is at his bedroom-eyed best as Dan Milner, a rambler and a gambler, literally. But Dan is easy to like; how can you not trust a guy who sticks with milk or ginger ale instead of booze, and helps others who are in trouble as well!   Sure, it’s implied that Dan has gotten in trouble with liquor in the past, but it’s also that clear that that Dan has learned his lesson.  Dan is the kind of likable lug who really should get in the habit of looking before he leaps. He seems to have been pretty successful at making a living from gambling (we wish Dan was a real guy who could’ve given my late dad pointers!), but Lady Luck hasn’t been returning Dan’s calls lately (dames—sheesh!). But Dan has a funny feeling there’s more to his recent string of nigh-Kafkaesque mishaps than cold dice, especially when he’s accosted by a couple of smooth-talking, suit-clad jaspers: Corley (the uncredited Paul Frees, whose voice is well known to Team Bartilucci from both animated and live-action films, including another RKO classic, The Thing from Another World), and Thompson (Charles McGraw from The Narrow Margin and The Killers, who also narrates the film in early scenes).  Corley and Thompson offer Dan a cool fifty-grand (big money back them) to go to The Morros Lodge, a fabulous Mexican resort (filmed in Baja California) and await further instructions, no questions asked (well, few questions, anyway).  Dan’s not entirely comfortable with the arrangement, but he sure can use the dough. Wonder if Dan’s ever heard a little story about a Trojan horse?

While waiting for his plane to Mexico, tough guy Dan is smitten in spite of himself when he meets the lovely, sassy, ostensibly rich Lenore Brent (Jane Russell from Gentlemen Prefer Blondes;The; Paleface; Macao), giving her lovely voice, among her other charms (producer Howard Hughes never missed an opportunity to showcase the ravishing Russell’s pulchritude). I always enjoy The Paleface hearing Jane Russell sing; she has a nice snappy way with a song, and she’s both sultry and jaunty as she sings “Five Little Miles from San Berdoo” and the torchy  “You’ll Know.” Despite their characters’ mutual cat-and-mouse routine, you can see the electricity crackling between Russell and Mitchum. There they are, sexy and playful as all get-out, and nobody’s naked (though they sometimes come close, at least by late 1940s/early 1950s standards)! By all accounts, Mitchum and Russell were good friends offscreen, and only friends. (In fact, after Mitchum’s death in 1997, Russell and Mitchum’s wife Dorothy scattered his ashes at sea.  But I digress!)

Back at the Morros Lodge the ranch, er, lodge, the fun in the sun apparently includes role-playing games as well, because each vacationer Dan meets at this gorgeous resort seems to be trying to be someone else!  Lenore may or may not be an heiress, and her real name may or may not be Liz Brady; Bill Lusk (Tim Holt of The Magnificent Ambersons and The Treasure of the Sierra Madre) might be a drunken tourist, or he might be a wily Fed. Myron Winton (Jim Backus, whose many roles included Rebel Without A Cause and TV’s Gilligan’s Island, not to mention the voice of Mr. Magoo!) is a! businessman who turns out to be a card sharp, or maybe just a plain old cheater. Then there’s mysterious author Martin Kraft (John Mylong) who only seems interested in playing chess with himself (“Maybe he hates to lose,” Dan suggests).

I also like that Dan is basically a decent guy with a kind heart underneath his sleepy-eyed shrewdness, like when he helps the young newlywed couple win their money back from sneaky so-and-so Winton. Maybe that’s why Lusk finally ditches his lush routine and reveals to Dan that he’s an immigration officer pursuing evil Nick Ferraro (is Nick an evil S.O.B. or what!?)  Burr is in his element in one of his juiciest over-the-top bad-guy roles before Perry Mason made him a TV star). Turns out the only thing Kraft writes is prescriptions: he’s really a plastic surgeon who was himself deported, like Nick. Seems Dan’s role in all this is the ultimate face-off: the doc’s supposed to put Dan’s face on the evil Nick so he can sneak back into the U.S., after which Nick and his boys will bump Dan off so Nick can keep his secret! Yikes!


I’ll admit the mix of film noir suspense and zany comedy gets a bit lopsided at times, but I was so caught up in the fun of His Kind of Woman, I was having too much fun to quibble!  I liked the nice background details, too, like the sarcastic radio announcer ragging on Nick Ferraro!  Lots of our favorite uncredited supporting players in His Kind Of Woman also include Mamie Van Doren, Robert Cornthwaite (clean-shaven and almost unrecognizable from his role as the exhausted, going-mad scientist in The Thing from Another World), and Anthony Caruso (The Asphalt Jungle, among others) as one of Nick’s vicious strong-arm boys. On a related note, it’s interesting to see the difference between early 1950s and 21st-century beefcake. As I said in my I Wake up Screaming post, today’s muscular hunks are so ridiculously ripped, you'd cut yourself if you touched them!  However, Nick is a psychotic, with a posse of sadistic henchmen, including Anthony Caruso (The Asphalt Jungle).; Charles McGraw.  But it’s Nick who’s the true villain.  He’s so nuts that he won’t let poor Dan come to come to until he gets to see right in his eyes!  Even the bad guys are getting antsy; maybe they’ve got more dates with other vicious bad guys his a gun in his hand – that guy’s so nutty, even his fellow goons are getting antsy, or maybe they just has other creeps to victimize!

Ironically, one of the most sincere characters in His Kind of Woman. is Vincent Price’s character, the flamboyant movie star Mark Cardigan. He thinks he’s gonna run off with his mistress Lenore.  Surprise!  Wifey Helen (Marjorie Reynolds of Ministry of Fear; and White Christman)) shows up, with her attorney in tow.  Price is clearly having a blast, and I don’t just mean with his hunting rifle!  Even with Mark’s goofy airs, he saves the day, bless him (with a few hilarious fits and starts along the way). Every cast member is great fun to watch, though there’s no denying that Price steals the show as Mark. He basks in the spotlight and he’s a big ham, but a tasty one. Even better, Mark truly puts his money where his Shakespeare-trained mouth is when Dan’s in danger. The scene where Mark tries to squeeze every volunteer at the resort into the boat to rescue Dan is laugh-out-loud funny!

Over at the TCM Web site, Price wrote that Mitchum was “heaven to work with...one of those “diamond- in- the-rough”  types in whose character you can’t find any sort of holes because he’s so open and honest...He’s a complete anachronism. He claims he doesn’t care about acting, but he’s an extraordinary actor. He’s one of that group of people in Hollywood who are such extraordinary personalities that people forget they’re marvelous actors.” Moreover, Mitchum was generous on the set, treating about twenty members of the cast and crew to lunch in his bungalow every day, and “on several occasions when he realized his stand-in had had a rough night, he stood in for the stand-in.” Don’t you love it when actors you like turn out to be decent folks, too?

The Film's DVD commentary mentions that one of the band members seen in the background of several scene was Lalo Guererro, credited as the father of Pacheco, or Chicano music.  In addition to popularizing the latin sub-style , he was also a master parodist, with Mexicanized versions of hit songs like "Tacos for Two" and his first big hit, "Pancho Lopez", a parody of Davy Crockett.