Gregory Peck is THE MAN WITH THE EXPLODABLE BRAIN!

When I was growing up in the Bronx, the 1969 20th Century-Fox political espionage thriller The Chairman was a staple of our local ABC affiliate's film show The 4:30 Movie. They usually edited the film into two 90-minute installments, including commercials, so they could stretch it out to run for two days during "Gregory Peck Week" or "Secret Agent Week," as needed. I liked the flick when I was a kid, especially if my older brother was around making wisecracks about the onscreen derring-do. In recent years, I noticed The Chairman turning up on Cinemax or Fox Movie Channel occasionally, so when I had a chance, I watched it again to see if it was really as good as I remembered.

All these years later, I'm afraid I must admit The Chairman actually benefits from the cuts that were required to squeeze it into The 4:30 Movie's two-part-90-minutes-including-commercials time slot. And it started so well, too! Gregory Peck plays American scientist John Hathaway (not to be confused with the Hathaway Shirt Man :-)). Our Dr. Hathaway is recruited by hardass military bigwig Shelby, played by Arthur Hill wearing glasses with one clear lens and one dark lens, which had struck me as cool back when I was an impressionable youngster. Hathaway's mission: smuggle a valuable enzyme formula out of Red China. Micromanager Shelby wants to be able to hear everything That Hathaway Man says and does during his delicate, dangerous mission. Does Shelby bug Hathaway's belt? Give him a shoe phone (well, this was the 1960s)? Kid stuff! No, Shelby has a transmitter implanted in our hero's skull! His skull, for cryin' out loud! Now that's an attention-getting premise by itself (even more so in 1969, when that kind of brain surgery was, shall we say, more problematic) -- but what Hathaway doesn't know is that while they were rearranging the inside of his head, the military brain surgeons also tucked a tiny little detonator in his cranium, in case something went awry, and/or Hathaway decided to quit, and/or spilled the beans to enemies.

You'd think a hero dashing around all over big bad Red China (played by Taiwan) with a bomb in his brain would make for a pretty suspenseful yarn, even if you think the Red China thing is old news. It is suspenseful at first, as well as during the exciting climax where Hathaway tries to escape from China to Russia. Unfortunately, Ben Maddow's script, based on Jay Richard Kennedy's novel, bogs down in the middle. Everyone turns into a garrulous philosopher, and viewers must slog through long, talky scenes in which Hathaway and the Chinese people he meets along the way (one of them Keye Luke, in old age makeup and good form as a sympathetic fellow scientist) spar verbally about East vs. West, scientific freedom, and enough other political topics to keep a college debate team going for a year. Even when Hathaway is jawing away with Chairman Mao himself (nice turn by Conrad Yama), the most politically savvy moviegoer will fidget in his/her seat, grumbling, "Yeah, okay -- now make with the action already!"

Maddow's script tries to perk things up by giving Gregory Peck some hip, snappy dialogue. Alas, even considering the era, phrases like "Hey, baby!" and "Weather's fine, wish you were her..." (while dictating a postcard to girlfriend Anne Heywood after a Hong Kong tootsie tries to seduce him) just don't quite fit in with Peck's stolid persona. In particular, when Peck tries to cut loose and be glib, his acting style comes across to me as ever so slightly wooden when he's not playing decent, solid, pillar-of-the-community kind of guys. (Tangent Alert...This was also a problem for Peck in the early scenes of Stanley Donen's delightful 1966 comedy-thriller Arabesque. Luckily, as soon as lovely, lively Sophia Loren shows up, her wit and sparkle seem to rub off on Peck, and the rest of the film is great fun...End Tangent Alert.)  At least Peck's relentless All-Americanism provides a good contrast between his character and the Chinese characters' "Just follow the Red Book and nobody will get hurt" attitude.

Considering Anne Heywood (The Fox) got second billing, her talent was wasted as Hathaway's understanding sweetie, Kay Hanna. (Fun Fact: Heywood's real name is Violet Pretty.) Her role is both tiny (she has three scenes, tops!) and unchallenging; she doesn't get to do much more than stand around saying wistful and/or supportive things about their relationship. Kay is supposed to be a London University professor, but her character has so little screen time and impact, she might as well have been a Mary Kay cosmetics salesperson (no offense to any Mary Kay personnel who might be reading this!). Speaking of underused actresses, I was bemused to see Mai Ling, known by James Bond fans as the gal who tried to spy on 007 for Pussy Galore aboard Goldfinger's private jet. Ling is stuck on a plane again, playing a flight attendant in The Chairman's opening scenes.

The best lines connected with the film actually came from my husband Vinnie, who came in late. When I explained the film's plot, he playfully retitled it The Man with the Explodable Brain. Actually, that's not so far from The Chairman's British title: The Most Dangerous Man in the World! With Vin's knack for mimicry, he improvised a hilarious mock-Goon Show sketch, imitating Harry Secombe doing the Peck role as Neddy Seagoon and Peter Sellers mimicking Hill as Moriarty, smoothly explaining Neddy's "explodable brain": "Look on the bright side. At least they won't be able to torture you." Vin even improvised Ray Ellington's jazzy Goon Show music in place of Chairman composer Jerry Goldsmith's bombastic blasts. Vinnie was more fun than the film itself; someone should perform his version of The Chairman! :-) 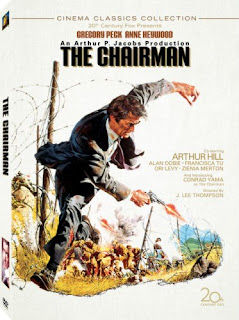 Next time: Strangers on a Train, just in time to see it again on TCM's The Essentials on Saturday, October 9th!