Blast from the Past: My 1990 VIDEO REVIEW Interview with Pat Hitchcock O’Connell

In my first major job after graduating from dear old , I had the good luck to get a long-term temping gig at the office of MGM/UA Home Video. Although the company eventually moved to , it was a valuable and enjoyable experience in many ways, chief among them working as an assistant to writer (pronounced “HAY-dew”). Our working relationship branched out into a 25-year friendship which, happily, continues today, not to put the whammy on it!  Over the course of those years, my husband Vinnie and I have periodically worked for David as freelance researchers, starting with his coverage of show business and music in such magazines as Entertainment Weekly and The Reporter. We’ve also assisted with research for David’s acclaimed nonfiction bestsellers Positively 4th Street (2001) and The Ten-Cent Plague (2008), both published by Farrar Straus Giroux.


David conducted brief but memorable celebrity telephone interviews in the 1980s and early 1990s at Video Review Magazine. The stars were asked to provide their “Picks” for their favorite films in whatever genre was being discussed in that issue. With David’s tight schedule, and with me being his trusty freelance assistant, it sometimes fell to me to contact famous folks and politely ask for a few minutes of their time to tell me what their favorite films were. Calling any stranger can be a gamble, but celebrities can be particularly—and understandably—irked about having their privacy invaded. I was lucky, though; most of the famous people I reached were pleasant and gave me enjoyable quotes. Some were surprising; for instance, I expected a horror film or two from Vincent Price, and his inclusion of Laura didn’t surprise me since he was one of its stars, but I was tickled when Price admitted he had a soft spot for The 13 Ghosts of Scooby-Doo! (And why not? Price kicked supernatural tush as Vincent Van Ghoul! He knew how to have fun with a role. But I digress….) 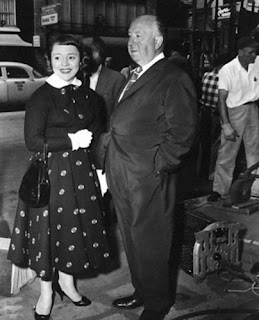 The only cold-caller I recall turning me down was author Harlan Ellison—but despite his reputation for being cantankerous, he demurred pleasantly and almost apologetically. He’d had a bad experience with the folks at Video Review in the past, and as such, had no desire to participate in an article for them.  He was perfectly polite about it: “I have nothing against you, dear, only your bosses. I’m sure you’re a very nice person, but from me, you can tell them to go burn.”

I’ll admit that of all the luminaries I talked with, I was most excited about the opportunity to talk with one of our family’s favorite character actresses, and certainly one of Alfred Hitchcock’s favorites: Patricia Hitchcock, born in and raised primarily in . Actually, Hitchcock’s only child, now 82, has been known as Pat Hitchcock O’Connell since her marriage to Joe O’Connell in 1952. As I’ve mentioned in previous TotED blog posts, Pat’s performance in Strangers on a Train as teenage Barbara Morton, the sister-in-law-to-be of beleaguered hero Guy Haines (Farley Granger) endeared me to her immediately, with her sweet face and her saucy way with a tart observation. Take her response when papa Senator Morton (Leo G. Carroll) scolds her about how even Guy’s late wife, a blackmailing slut, “has a right to life and the pursuit of happiness.” Barbara’s pat rebuttal:  “From what I hear, she pursued it in all directions.” Before SoaT, Pat studied at the Royal Academy of Dramatic Arts in London, where she made her film debut in her father’s 1950 thriller Stage Fright as Jane Wyman’s pal Chubby Bannister (“…a girl you can lean on,” quipped Hitchcock). Not content to simply steal the show in SoaT, Pat also stole her scenes in Psycho (1960) as Marion Crane’s (Janet Leigh) co-worker Caroline, who cheerfully offers tranquilizers to the stressed-out . Pat guest-starred on many episodes of Alfred Hitchcock Presents and Playhouse 90 in addition to stage work.
Although Pat has retired from acting, she’s busy nevertheless. She is:

I feel so lucky to have had the opportunity to share memories and observations with this marvelous woman! Without further ado, here is:

Video Review: Patricia Hitchcock’s Picks (Including a Surprising Choice)
The warmest and sanest of the creations of master director Alfred Hitchcock is certainly his daughter, Patricia Hitchcock O’Connell. Known to Hitch buffs for her colorful supporting performances in her father’s Stage Fright, Strangers on a Train, and Psycho, the now-retired actress remains an avid video viewer of her favorite genre, mystery and suspense. These are her five favorites (in chronological order):
Shadow of a Doubt (1943)
“Naturally, I love my father’s movies best, and this was my father’s own favorite. I think he loved it because he was so involved on the set, which was very unusual for him. I was there, coaching the little girl (Edna May Wonacott), who was actually the daughter of a local grocer. My father loved her natural quality, although I had to teach her how to act.”
Notorious (1946)
“In this one, my father was really able to do all the things he enjoyed doing artistically and technically. He also used brilliant actors down to the smallest parts, like the Germans—especially Leopoldine Konstantin [who played villain Claude Rains’ domineering mother]. The only problem was that because of the politically sensitive plot about making a bomb out of uranium, my family was followed by the FBI for months.”
Strangers on a Train (1951)
“The homosexual theme of this movie was way ahead of its time and very interesting. As a matter of fact, few people really caught it when the movie was released.”
Psycho (1960)
“With this movie on video, I don’t know why they keep making sequels. They all miss the point of the original—they’re all shot in color and put more importance on blood than on the story and the suspense.”
E.T.: The Extraterrestrial (1982)
“This may sound funny, but I think the suspense in E.T. is great. I think Steven Spielberg is the modern director who’s closest to my father, because he has a gift for creating suspense, and he makes movies for the audience.”